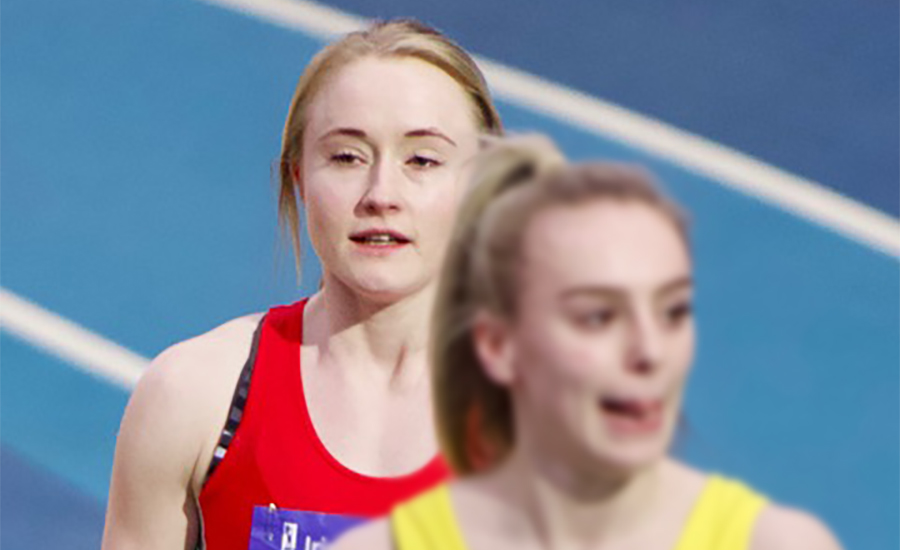 Amy Foster broke the Irish 60m indoor record as a host of athletes impress on their way to winning gold at the Irish Indoor Championships on Sunday (Feb 18).

An Irish Indoor 60m record of 7.27 and another personal best for Amy Foster of City of Lisburn AC was just one the highlights at the second day in Abbotstown.

Foster had equalled the record of 7.30 secs, held by Anna Boyle and Ciara Neville, a few weeks ago to qualify for the World Indoors next month.

She ran 9.31 in the semi-finals in Abbotstown, hoping that her second run of the day would prove even faster. So it did and Foster proved the class of the field. Bandon’s Joan Healy finished second with a personal best time of 7.31 secs, while third was Ciara Neville of Emerald AC in 7.35 secs.

Also in the sprints, Leon Reid of Menapians repeated his 60m and 200m double of a year previously. Six men ran under seven seconds in the semi-finals with Marcus Lawler of St LOT the quickest with a time of 6.78 secs, closely followed by Reid with 6.80.

Despite a poor lane draw, Reid then won the 200m with a classy run that saw him coming from behind to win in 21.36 secs. 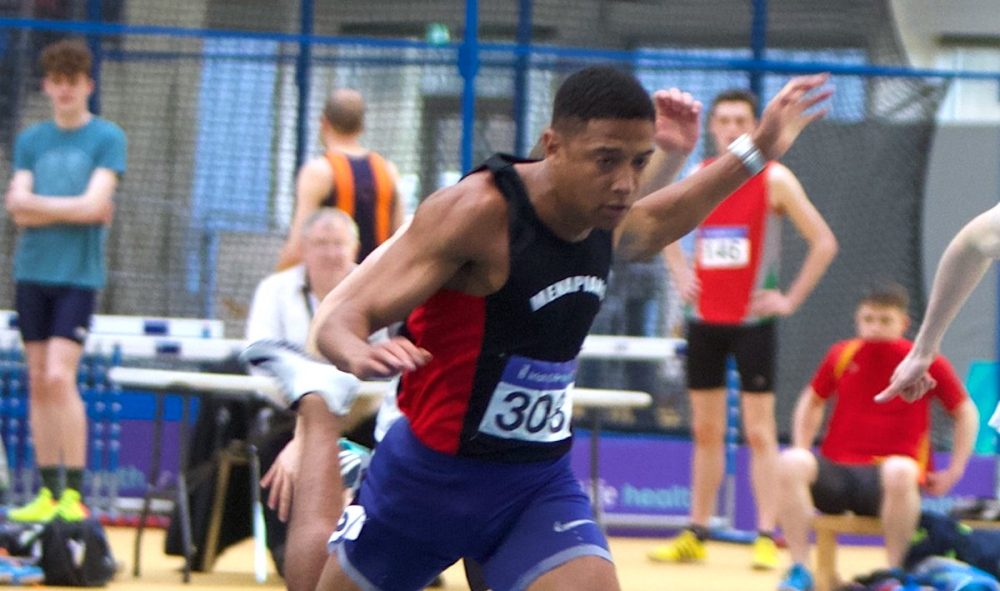 Second was Craig Newell of Ballymena and Antrim in 21.64, with Rathfarnham’s Stephen Gaffney third in 21.69 and Olympic 400m hurdler Thomas Barr of Ferrybank, who had the favoured outside lane, fourth in 21.70.

Over the longer distances, John Travers of Donore Harriers successfully defended his 3000m title holding off Kilkenny’s Eoin Everard in the sprint for the lien and clocking 8:25.21. 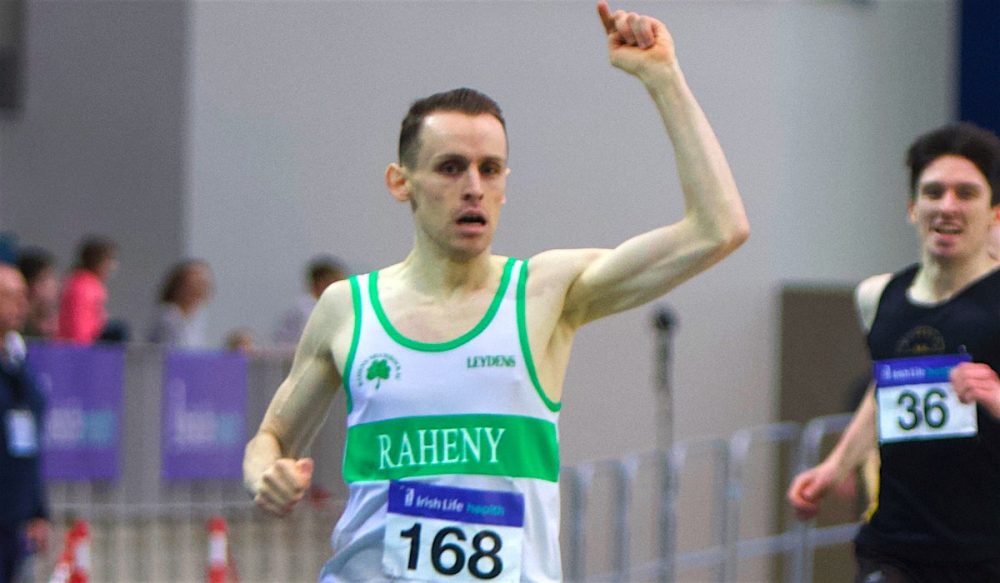 Proving that he had lost none of his class during a long injury lay-off was Mark English of UCD who won the men’s 800m with a blistering turn of speed on the final lap.

English had stayed behind Kevin Woods of Crusaders and his UCD clubmate Karl Griffin in the early stages of the race, only showing his hand with about 120 metres to go and winning in 1:53.53.

Coming through for second class was junior athlete John Fitzsimons of Kildare AC in 1:55.14. Winning the women’s race and her first national title was Alanna Lally of UCD in 2:08.71.

After recently running the second fastest Irish time ever, Phil Healy of Bandon AC was the overwhelming favourite to win the women’s 400m and she did not disappoint, clocking a time of 53.10 secs. Also under 54 minutes was second placed Catherine McManus of DCH with 53.81. 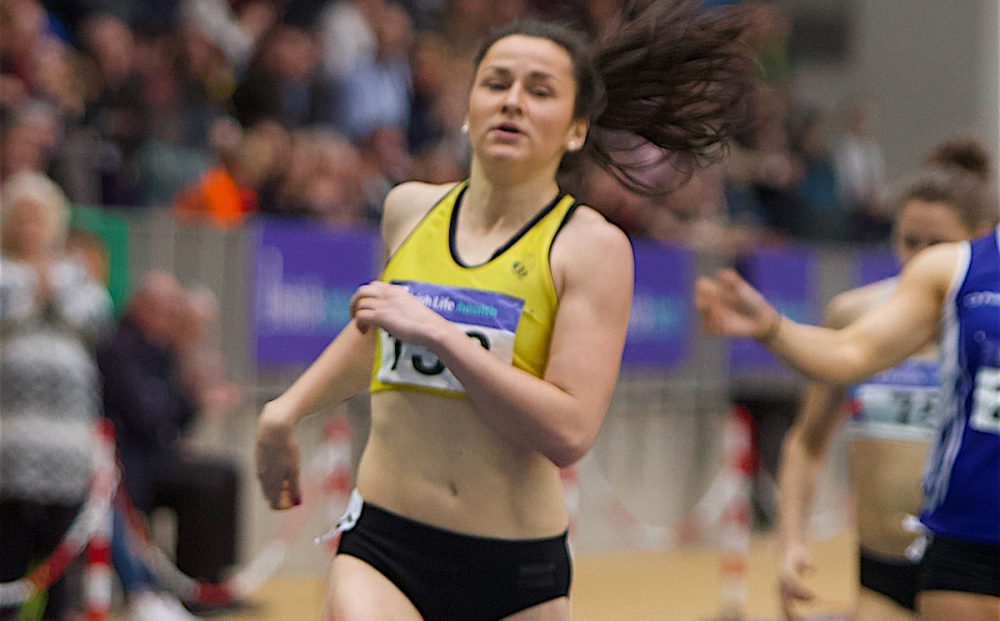 Both 60m hurdles races produced surprises. In the women’s race, only close examination of the photo-finish gave the victory to defending champion Elizabeth Morland of Cushinstown. She finished in 8.43 secs; for second place, UCD’s Sarah Lavin was timed at 8.45 secs.

Winning the men’s race was Matt Behan of Crusaders in a personal best time of 7.84 secs which saw off many times Irish champion Ben Reynolds of North Down who clocked 7.88.

Another Irish record came in the shot won by Sean Breathnach of Galway City Harriers whose best throw of 18.30m added three centimetres of his own record set in 2016. Second with 17.53 was John Kelly of Finn Valley.

Northern Irish long jumper Adam McMullen who competes for Crusaders AC was agonisingly shy of the eight-metre Irish indoor record with a winning effort of 7.99m, while Saragh Buggy of St Abban’s retained the women’s tripled jump with 13.02.

In the high jump, Barry Pender showed that he is right back in form with a winning height at 1.24m. Pender went on to made an ambitious attempt at the Irish record of 1.27, but narrowly failed.

In the women’s pole vault, Ellen McCartney of City of Lisburn’s 3.72m broker her own national junior record of 3.62m set last month.

On Saturday, in the first of two-days of action Sarah Healy, who just turned 17 on Tuesday, celebrated in style by winning her first national senior title. More about Healy’s performace and all of Saturday’s action can be found here.