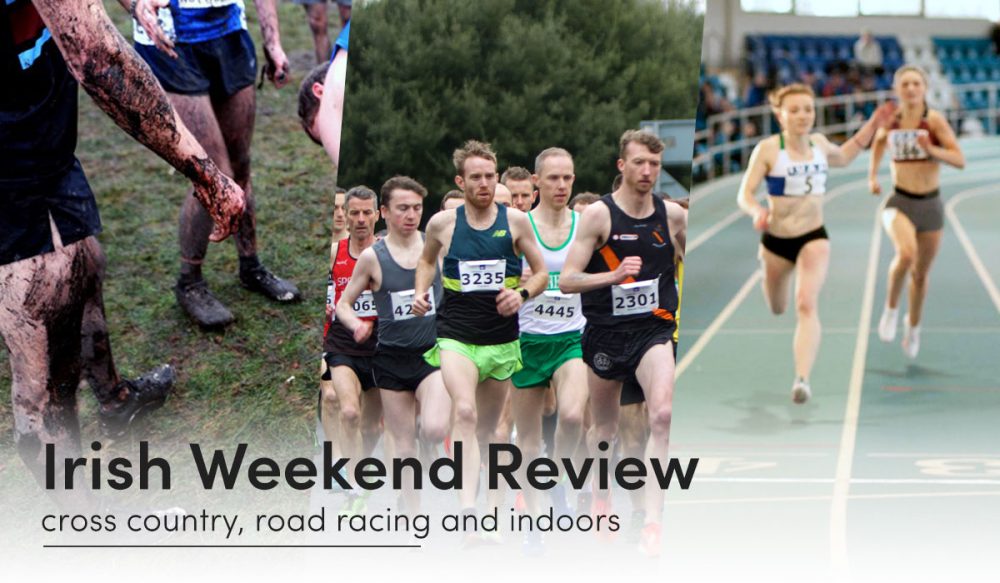 It was an action-packed weekend in running and athletics, with indoor meetings from Boston to Gent to Athlone, while on Irish soil masters athletes enjoyed the freezing mud of Galway.

Sean Tobin and Ciara Mageean were racing indoors in Iowa and Boston on Saturday night and you can read more about their performances here.

Kevin Dooney and Paul Pollock finished 24th and 28th at the Barcelona Half Marathon on Sunday with times of 64:56 and 65:40 respectively. For Dooney, who features in the ‘class of 2018’ it was a PB by over a minute, while Eoghan Totten finished 32nd in 66:14

Hiko Tonosa and Linda Byrne made it Dundrum South Dublin double at the Enniscorthy 10km, which attracted an entry of almost 400 on a bitterly cold morning.

Tonosa, who is Ethiopian, was a clear winner of the race by over a minute in 31 mins 12 secs, with Liffey Valley’s Peter Arthur second in 32:23. Byrne, a previous winner of the race, finished 12th overall in 36:35. Second was Sinead Tangney of Sportsworld in 37.50. Results can be found here.

Sprinter Joan Healy of Bandon AC shaved one-hundredth of a second off her previous best at the Ifam Indoor meet in Ghent, Belgium. Healy clocked a time of 7.33 secs for second in her 60m heat and then ran exactly the same time for fifth place in the final.

Before this season, Healy’s best was 7.41 secs and she’s now just .03 off joining younger sister Phil at the World Indoors.

Finn Valley’s Sommer Lecky won the high jump with another 1.86m. Lecky, aged 17, goes for a third national title at the National Indoors next weekend and then heads for the Commonwealth Games where she will represent Northern Ireland.

At the David Hemery Invitational in Boston on Friday (February 9), Siofra Cleirigh Buttner of DSD and Villanova ran 4:36.62 for seventh place in the women’s mile.

Her clubmate Sophie Murphy, who was tenth in the junior women’s race at the European Cross Country in December, ran a personal best of 9:38.60 for fifth place in the 3000m at the Fasttrack National Invitational at Staten Island, also on Friday.

Marcus Lawler of Carlow IT put down a serious marker for the National Indoors when winning the 60m in a personal best 6.78 secs at the Irish University Indoor Championships in Athlone on Friday (February 9). Second was Leo Morgan of MU in 6.83 secs – also a personal best and the second fastest this season. In the heats Eanna Madden clocked 6.89 secs.

Craig Newell of UU’s time of 21.47 secs in the 200m was also the fastest so far this season and a personal best. In the 400m, Andrew Mellon clocked 47.87 to beat UL’s Paul White and Brandon Arrey of DCU.

Winning the women’s 60m in a championships record time of 7.33 secs was UU’s Amy Foster, who equalled the national record with a 7.30 secs time in London last month. Finishing second in a new best time of 7.39 secs was Molly Scott of Carlow IT.

In the 400m, Sophie Becker of DCU just held off UL’s Jenna Brommell for victory in 54.76 secs. Winning the 30000m was Commonwealth Games -bound Emma Mitchell of Queen’s University in 9:15.86. Winning a tactical men’s 1500m was John Fitzsimons of Carlow IT. 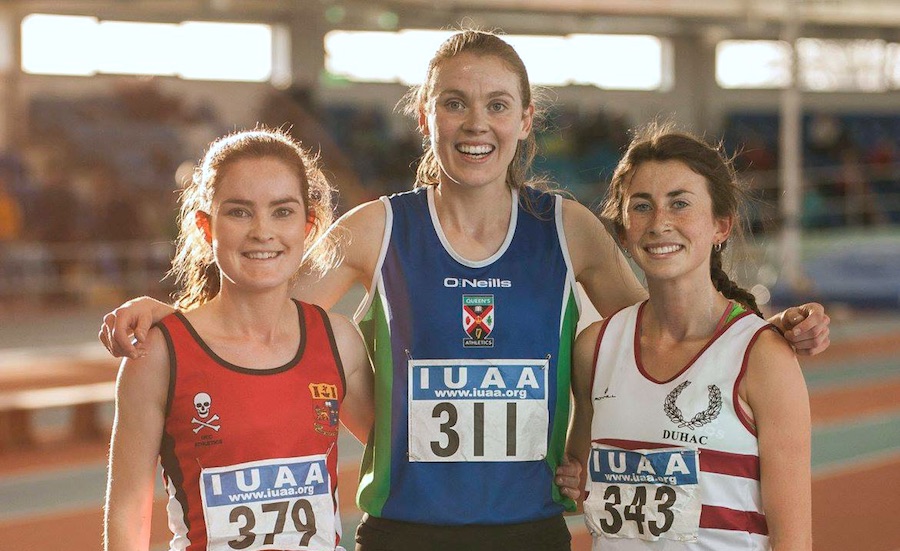 Busiest athlete of the day was DCU’s Elizabeth Morland who won the pentathlon with a score of 3985, also finishing first in the high jump and long jump and second in the 60m hurdles and shot. Full results can be found here.

Joe Gough of West Waterford smashed the Irish M65 800m record at the NIA Live indoor meet in Abbotstown town on Thursday (February 8) .
Gough’s time of 2:18.99 saw him winning his heat comfortably and smashing the old record of 2.34.52.

Winning the A race was Mark Milner of Mullingar Harriers in 1:53.18. Fastest woman was Kelly Neely of City of Lisburn who ran 2:09.86 in a mixed race.

Fastest in the 60m was Stephen Gaffney of Rathfarnham WSAF with 6.96m. Next round February 22.

Paul Moloney of Mallow AC was a clear winner of the men’s race at the National Masters Cross Country in Clarinbridge, Co Galway. The freezing, muddy conditions clearly suited Moloney who has form – he finished fifth in the 5000m at the European Masters in Aarhus last August.

Taking team gold was Rathfarnham WSAF, with Letterkenny AC beating Finn Valley AC to silver on countback. North Belfast Harriers were best of the M50 teams, ahead of Dundrum AC and Clonliffe Harriers.

A delighted winner of the women’s race was Sarah Doohan of Corran AC in Co Sligo. She finished in 15 mins 40 secs – comfortably ahead of Leevale’s Michelle Kenny and Martina Kiely of St Finbarr’s. First over 40 was Karen Costello of Dunleer AC in fourth place.

Best of the W35 teams was Crusaders AC. Sportsworld were second and St Finbarr’s third. An Riocht took W50 team gold ahead of Raheny Shamrocks and Mayo AC.

Portlaoise AC took team gold. Michael Harty of East Cork, who won the masters race last year, opted for the intermediate race this time and not only came home first ahead of Kevin Moore of Dundrum AC and Feidhlim McGowan of North Sligo but led East Cork to the team victory. Full results can be found here.

McKinstry took the win in the men’s 4-mile race in 24:57 ahead of Derry Track Club’s Conan McCaughey in 25:34, while North Belfast Harrier John Black finished third in 26:15.

Craig won the women’s 3-mile race at the City of Belfast Playing Fields in 22:35 ahead of Albertville Harrier Tracey Atkinson in 23:58.
Lagan Valley AC’s Jenny Finlay clinched the third spot with 24:37.