A race to break the world record in Valencia 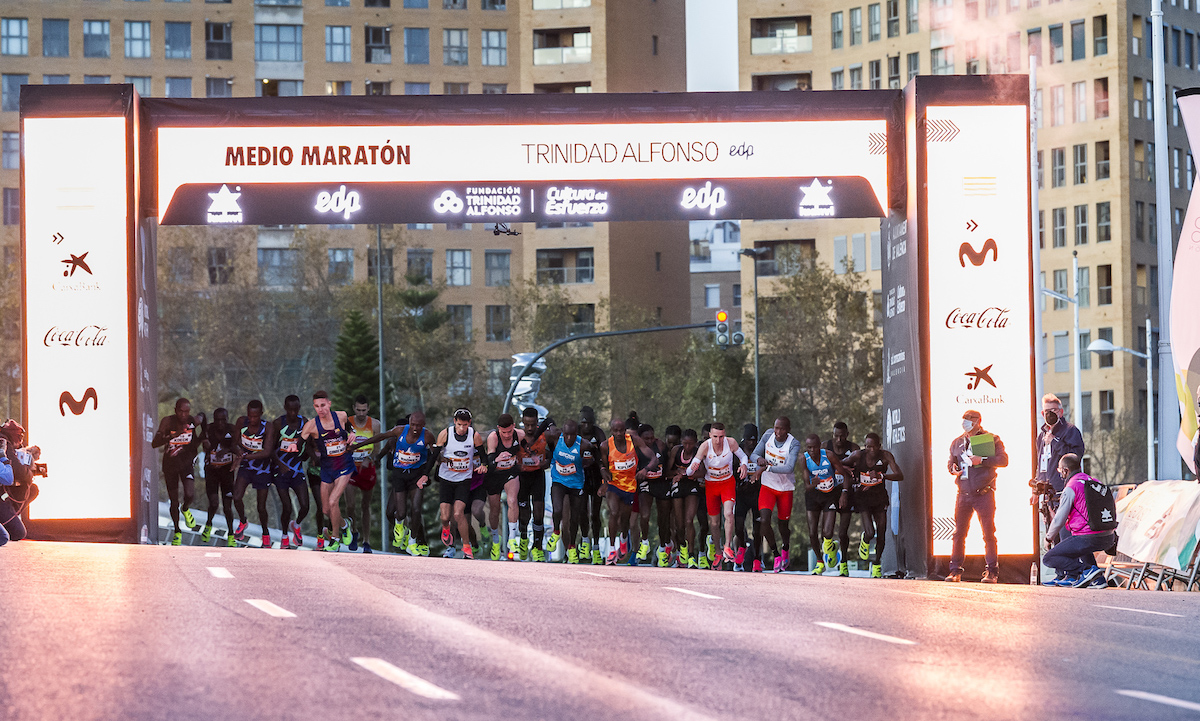 Kibiwott Kandie stormed to 57:32 with four athletes sailing under the world record for Half Marathon in Valencia on Sunday morning.

The race was expected by some to be a supporting event to the 40th edition of the Valencia Marathon in what is described as the ‘City of Running’.

The Spanish City, also known for its oranges became the latest place to overcome Covcid-19 restrictions and assemble a world class elite field to offer some normality to the world of elite road racing. Elite Race Co-ordinator Marc Roig had described the assembled field as offering in prospect ‘the best race in history’.

World record holder over 10km Rhonex Kipruto and fellow Kenyan Kibiwott Kandie with a best of 58:38 were also on the star-studded start list.

Some special from the start

The three were joined by Alexander Mutiso and Philemon Kiplimo as the group of five athletes passed the 10km mark in a smouldering 27:24 with all still present when 15km was passed in 41:10. By the 20km mark Kandie and Kiplimo remained together, passing the split point in 54:42.

Kandie’s finishing time of 57:32 took 29 seconds off the world record set by Geoffrey Kamworor in Copenhagen and edged out Jacob Kiplimo just six weeks after finishing as runner-up to the young Ugandan in Gdynia.

Kiplimo came home just four seconds later in 57:36 with Kipruto third in 57:48 and Alexander Mutiso fourth in 57:59. These results were so incredible that fifth placed Philemon Kiplimo finished in 58:11 just 10 seconds outside the previous world record.

Dibaba leading from start to finish

Genzebe Dibaba recorded a gun to tape victory in the women’s race finishing in 65:16. This was an extraordinary feat by the world recorder for 1500m who debuted for the distance and had never run a 10km race on the road either.

Sheila Chepkirui and Senbere Teferi were next to finish in 65:39 and 65:51. Emily Sisson finished just a second outside Molly Huddle’s US Record in 67:26. For the first time in a while the number of Adidas shoes seemed to at least outnumber the Nikes at the front of races. Photo: Valencia Marathon

The women’s marathon featured Peres Jepchirchir who was crowned world champion over the half marathon distance in Poland in October and fellow former half marathon world record holder Joyceline Jepkosgei.

Starting fast and getting faster

Cherono took up the front running in the final stages to return to the City of Arts and Sciences Park with only Evans Chebet still in touch. Cherono look spent however as the smooth running Chebet ran 2:03.00 to lower the course record, posting a world lead and shooting to sixth fastest in history with Cherono second in 2:03.02 and Birhanu Legese third in 2:03.15.

Chebet commented ‘I’m very happy because I know this course, this course is nice. I have run 2:05 here before and this year I have run very well, winning in Lake Biwa and now here’. ‘Maybe next year I will come back again’ added the 32 year old Kenyan.

Ayad Lamdassem looked to be in agony crossing the line in a new Spanish record of 2:06.38 shaving 18 seconds of the previous mark.

Briton Matt Clowes had been chasing a P.B. and flew through the half way point in 65:14 before tiring to finish in 2:15.44. Norman Shreeves, pictured below being photo-bombed by Peres Jepchirchir at the finish line, ran an excellent 20 min marathon PB in 2:17, whilst Gary O’Hanlon and Paul Martelletti also broke 2:20. Peres Jepchirchir times it perfectly so that Norman Shreeves (Cambridge & Coleridge) can also feature in the picture. Photo: Valencia Marathon

The women’s race saw victory for Jepchirchir in 2:17.16 under the 2019 course record held by Roza Dereje and moving to fifth on the all-time list just six weeks after regaining her global title over the half distance.

The Kenyan supremo had passed half-way in 69:01, increasing her tempo in the second half to finish ahead of Joyceline Jepkosgei who recorded 2:18.39 in the city where she holds the course record for half marathon.

“I’m feeling good, I did well and the energy it has given me is unbelievable” said Jepchirchir. ‘This was my dream’.

Northern Ireland record holder Anne-Marie McGlynn travelled to Valencia chasing the Olympic qualifying time of 2:29.30. Although falling some way short, it was still another fine performance for the 40 year old, finishing in 31st place in a stacked field, with a time of 2:35.29.

It’s not often you start the day as a world record holder and less than an hour later end up as fifth all time. Out thoughts go out to Geoffrey Kamworor, who’s having a tough 2020 all round. Still we hope he doesn’t get given this world record back again.