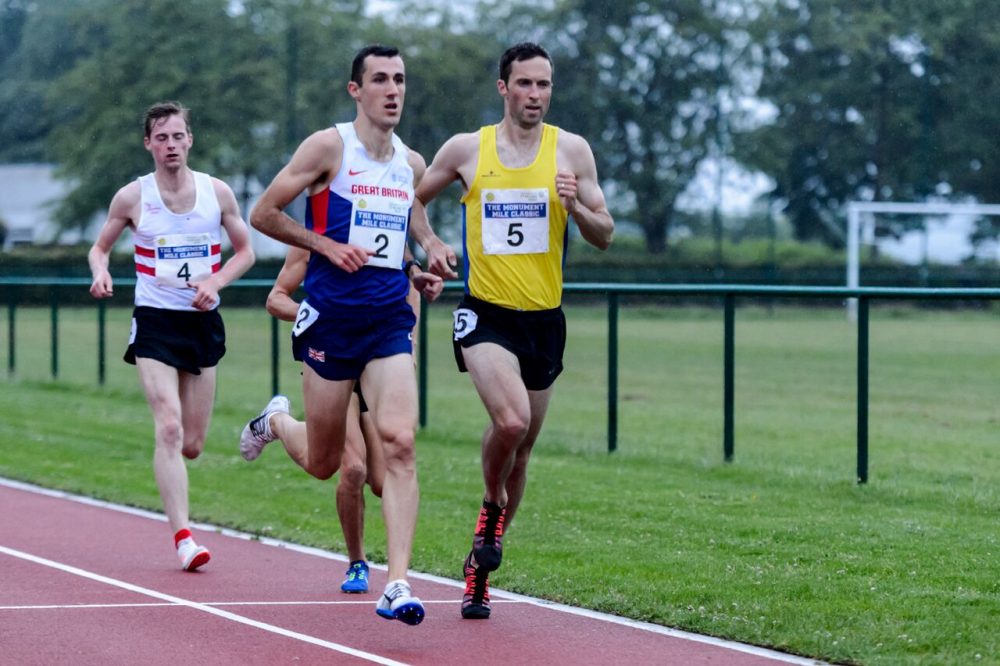 Wins in the elite male and female miles for both pre-race favourites Ben Greenwood and Mhairi MacLennan tell half the story. The Central AC organised event saw great levels of competition throughout and these photos show some of the action.

Stars of the future With mile racing for all ages, there was an abundance of PBs. The 13 races on the night started with youth events for many first time milers. Learning the tactics skills of track racing takes practice and Central AC and Scottish junior athletes of all ages took the opportunity to race the classic mile distance. Here we see Connor Bell (100), Ruairidh Burns (102) and Euan Campbell (103) leading the pack in race 5. Yet it was Jack Kerr (26) who was the winner in 4:26. Clearly, the Central AC u20 has recovered from running 77:31 at the Edinburgh Half at the end of May. Logan and Miller finished in 6th and 7th respectively after pushing the early pace, but will surely be back next year to challenge again. It was down to Mhairi MacLennan (14) and Jenny Selman (15) to take the women’s race by the scruff of the neck after Steph Pennycook was a DNS. Fife AC’s Selman battled hard with the Scottish National XC winner for 3 laps before MacLennan made a gap.

Race director Michael Wright said: “It was impressive to watch the two athletes go toe to toe for three laps, then Mhairi took off.” The Inverness Harrier won in 4:54:23 with a healthy gap on Selman (5:08) with Joanna Brown making up the podium in 5:09 and nearly catching Selman. The prize fund of £400 for a sub 4:40 mile wasn’t troubled in the wet weather, but the race director was already discussing the possibility of rolling it over for next year to entice more athletes from across the UK to run quick miles at the event. The rain persisted, but so did the hard racing. A good quality field started, with favourite Ben Greenwood wearing British Athletics kit and number 2.

Leaders of the pack The early pace was set by Aidan Thompson (1) of Central AC. The pacemaker wasn’t able to keep the predetermined sub four-minute mile pace and went through 800m in about 2:08 in the tough conditions. When Thompson stopped just before the one kilometre point it was Greenwood (2), Scottish Commonwealth athlete Ali Hay (5), Aberdeen AAC’s Michael Ferguson (4) and Jamie Crowe (3) who then raced for the win. For three and a half laps it was anyone’s race.

Central AC’s RD Wright excitedly told us that “with about 250m to go Ali hay put in an almighty kick. At 200m before the finish, it looked like no one could catch him. Ali claimed afterwards that 90’s dance classic “Sandstorm” by Darude pumping from the sound system prompted his early push for the line”.

Sprint to the line Yet the 800m runner Greenwood did not give up. “At 100m to go it still looked like Ali’s race, but somehow Ben was back in contention and surged past in the last 20m,” said Wright. “How Ali didn’t win, I’ll never know.” The 2010 Commonwealth Games athlete certainly made a race of it to the line. Once again the additional prize fund for breaking 4:05 wasn’t touched so can potentially roll over for next year and another series of great races.

A great success, despite the weather

Kenny Hislop of Central AC said: “It was brilliant and all in all a great success, despite the weather not helping us. There was a host of PBs, although some were guaranteed, and the elite men’s race was so close.”

The event looks like one to put on your calendar for 2019 if you’re after a mile PB and want to see some great Scottish and British racing. Well done to Central AC and Stirling University for organising.