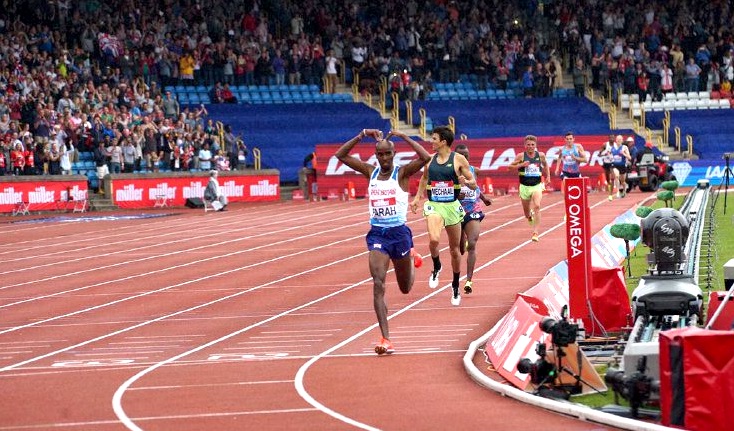 It was the perfect farewell for Mo Farah as he won his final track race on home soil at the Diamond League meeting in Birmingham.

Cheered on by an adoring crowd at Alexander Stadium, the four-time Olympic champion clinched victory in the 3,000m, clocking 7:38.64, ahead of a battling Adel Mechaal of Spain.

It was the fairytale ending on the British track the 34-year-old sought after missing out on 5,000m gold at the World Championships.

Few will remember or care that Farah didn’t win a third straight world double in London, with the star of athletics bringing the curtain down on an illustrious track career in Britain with more major championships gold medals than any other British track athlete.

Before Farah turns his focus to road racing and the marathon, the sixth time world champion will run his final track race at the Diamond League finals in Zurich on 24th August.

“The emotion was high and I had a lot of support from the home crowd.

“I just want to continue to see what I can do on the road, without having a target on my back, and just try to enjoy it without so much pressure,” he added.

Earlier in the 12th Diamond League meet of the season, Elaine Thompson got back to winning ways in the women’s 100m after missing out on a medal at the World Championships.

Turkey’s Ramil Guliyev continued his fantastic season with the 200m win, clocking 20.17. The world champion finished ahead of Ameer Webb of the USA and Canada’s Aaron Brown in third.

World Championships fan favourite Issac Makwala was leading at the bend but faded to finish fourth.

Afterwards, Mitchell-Blake said: “It’s a shame I couldn’t put on a better performance. It’s a learning experience about how to compete after a championship.”

Mutaz Essa Barshim arguably delivered the performance of the day with a world lead of 2.40m in the men’s high jump.

In an all British 100m line-up, CJ Ujah stormed to the win in 10.08, ahead of James Dasaolu and Zharnel Hughes.

The 24-year-old passed world 5000m champion Hellen Obiri on the final bend running powerfully down the home straight for a meet record.

Britain’s Eilish McColgan continued her fine form over 3000m this year finishing fifth in 8:31.00, another personal best for McColgan this year.

Hassan said: “It has been three years since I last ran a 3000m so I enjoyed the opportunity to run the distance here. Racing over distances like the 800m and 3000m always surprises me but it was a fast race and I ran a very good time. The fact that it is a national record and meeting record is a nice bonus for me.”

After a disappointing performance in London, Nijel Amos of Botswana clinched the men’s 800m in 1:44.50. Polish duo Adam Kszczot and Marcin Lewandoswki completed the top three.

Katerina Stefanidi took her unbeaten tally for the outdoor season to nine events, a best effort of 4.75m enough for victory in the women’s pole vault. GB’s Holly Bradshaw led the best of the rest on 4.61m.

In the women’s triple jump, Colombia’s world silver medallist Caterine Ibarguen went one better than she did in London as she triumphed with a best leap of 14.51m.

Away from the Diamond League main events, there was a first British winner of the Emsley Carr Mile since 2005 as Wightman out sprinted teammate Chris O’Hare down the home straight for victory in 3:54.92.

In a tight race, Wightman and O’Hare broke clear from the rest around the last bend with the former coming out on top by 0.09 to also become the first Scottish winner of the event since 1978.

Wightman said: “I needed to redeem myself after the worlds, where going out in the semis was pretty gutting. With 300m to go I could feel Chris and I knew one of us was going to win, and I’ve not beaten him in a long, long time.

“I knew the shape I was in before the worlds that I had the ability to get into that final and I just got it wrong, so I wanted to win out here. I thought I could do it with 300m to go and I could hear the crowd roaring, the noise is class.”

Clarke did his best to cut Bosworth’s lead in an intriguing battle that had the crowd hooked over the last 400m but fell just short as Bosworth crossed the line in 3:28.28, taking victory by 0.71.