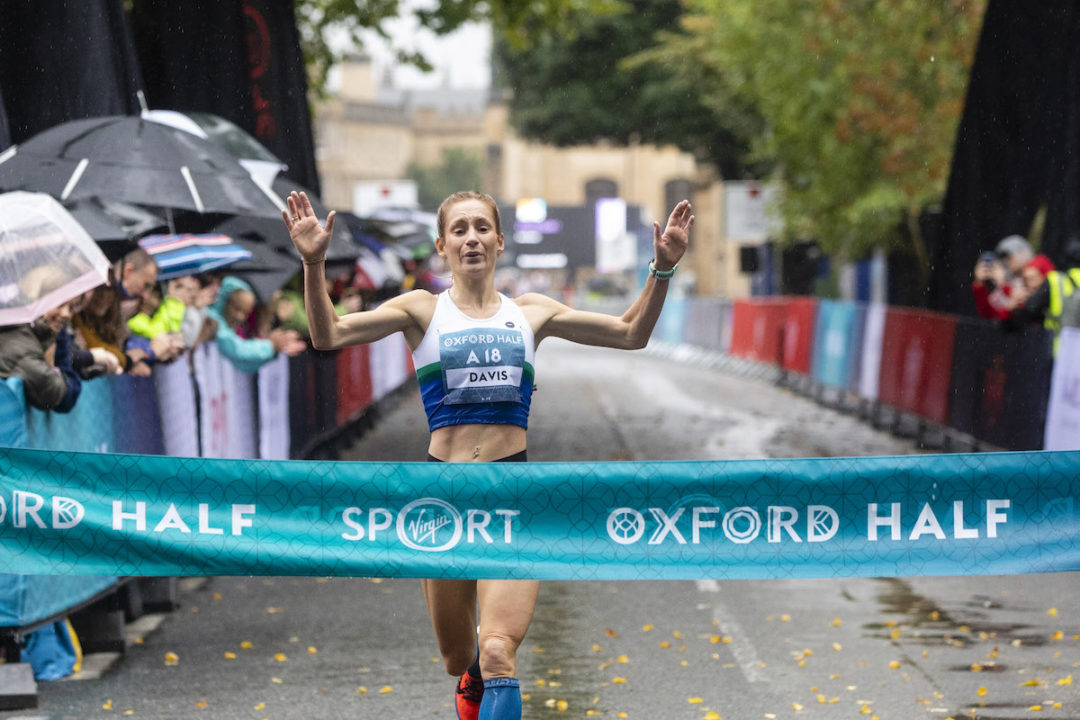 Photo: Oxford Half Marathon (which had no single use plastic cups at checkpoints)

It’s been a quick rise to Olympic contention for Scottish athlete Steph Davis, but it seems she is still on the rise.

Born in Glasgow and now living in London working for and supported by Lazard Asset Management, Steph Davis ran her first half marathon in 2017 and first full marathon in 2018 (Berlin, 2:41:18).

Steph burst into the marathon-world limelight after running a 2:32:18 off the mass start at London Marathon in April 2019. Three months later she was announced as part of the scottishathletics Marathon Project targeting the Commonwealth Games, Birmingham in 2022.

At the time she was selected that seemed like a sensible target which would allow time for a promising young athlete to develop. However, with her fierce but fun work ethic and under the guidance of coach Philip Kissi at Clapham Chasers, Steph’s talent has developed at lightning speed.

She rounded out 2019 with a confident performance at Valencia Marathon of 2:27:40 which not only placed her fourth in the UK for the year and ninth British and third Scottish on the all-time list but also fast-tracked her competition plans by landing her an Olympic Qualifying time alongside Jess Piasecki, Charlotte Purdue and Steph Twell. FastRunning: What were you most excited by in your running last year?

Steph Davis: The highlight has to be running the Olympic qualifying time (2:27) at Valencia. My training block had felt bumpier compared to London so I had mixed feelings about the shape I was in. It goes to show that if you have a goal never give up – anything is possible if you keep focus and as much consistency as you can.

SD: My key goal is to stay healthy and injury free so that I can train to my full potential. I am really excited to run as part of the elite field at London marathon and at the Olympic trials. It will be my first female only race so it is quite scary too! The standard of female marathon running in the UK is red hot at the moment so it will be a good race for the spectators aswell.

SD: It is incredible to see so many women in the UK close to the Olympic qualifying standard. I think when the competition is so high, it pushes us all to train and race harder. I hope that as women, we are inspired and motivated by each other, I certainly am.

SD: There have been a lot of outstanding performances that it is difficult to pick one.

SD: For me, being ranked 4th in 2019 with only 3 Olympic spots available, the decision to not preselect anyone was a good one. It is all still open to complete for.

FR: Will you be running the London Marathon and if so, are you willing to share your goal for it?

SD: I am running London. For me, it will be like any other marathon – I’ll aim to work hard and continue my progression. Once I am further into my training block my coach and I will have a chat about my race plan and target.

SD: I do my everyday and recovery runs in Mizuno Wave Inspire. I’ve used this shoe for a while and like the support it offers when running slower.

For my training sessions (track and tempo), I wear Nike Zoom Fly. This isn’t too dissimilar to the Vapourfly Next %, which I currently use for races, so it allows me to practice in a shoe that has a similar shape to what I will race in. At the moment I am trying out some different shoes but there are so many out there it becomes a bit of a minefield.

SD: There are too many to mention that I don’t want to get into trouble for missing anyone out. I couldn’t do the training without my coach and teammates so I owe a big shout out to them. My boyfriend and my family are super supportive (and patient with me!) during the training bouts and at all my races. It is definitely a team effort.