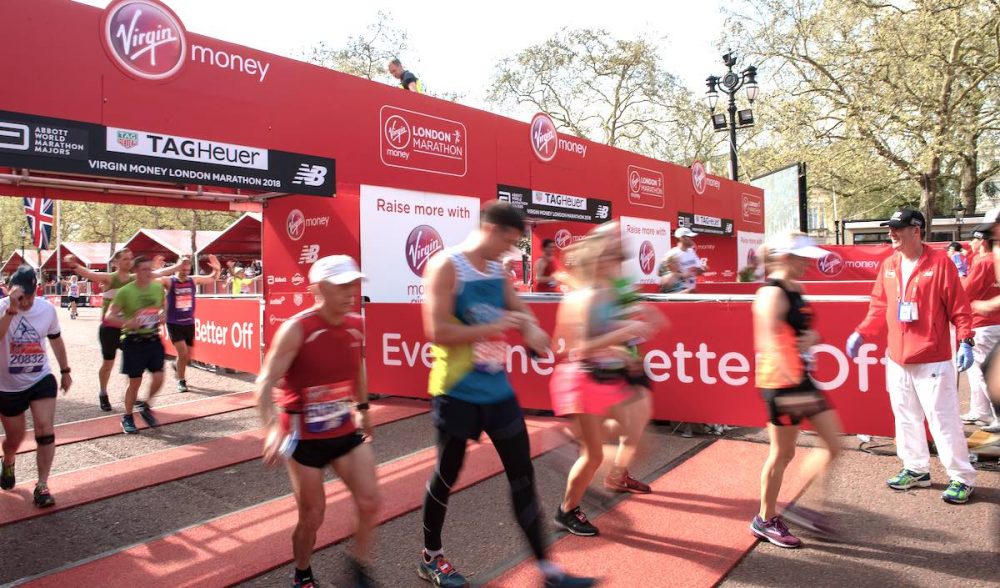 For the first time more than 40,000 runners completed the Virgin Money London Marathon.

A record number of participants left the London Marathon start line, making the 38th edition of the race on Sunday (April 22) the biggest in its history.

By 19:00 this evening, 40,255 had conquered the hottest Race Day on record to cross the finish line beating last year’s record total by 768 runners.

Some 41,003 set off on the 26.2-mile journey from Blackheath to Westminster at 10:00 this morning, sent on their way by Her Majesty The Queen, who pushed the event’s famous red button on her gleaming green lawn in front of Windsor Castle as a hooter sounded over the heads of the men’s elite field on the far side of London.

Just over two hours later, it was the majestic Eliud Kipchoge who stormed across the finish line first to become only the third triple London men’s champion and cement his status as king of the roads. Kipchoge came home in baking sun to clock 2:04:17 after tearing through the first half at record pace, followed two minutes later by Mo Farah who sealed his 10th British record to take third and a cherished spot on the celebrated London podium.

Kipchoge’s victory was the 14th by a Kenyan man in London and his victory completed a seventh London double by the east African nation after compatriot Vivian Cheruiyot had overhauled record-chasing favourite Mary Keitany for the biggest win of her burgeoning road race career, while Lily Partridge was the British woman home with a PB run.

Kipchoge’s win sealed his third Abbott World Marathon Majors win as he claimed the Series XI prize, while Keitany’s fifth-place finish earned her the equivalent women’s purse of US$250,000.

The thousands of sun-bathed British fans had already found plenty to cheer as David Weir outsprinted Marcel Hug to clinch an eighth wheelchair crown on his 19th appearance at the race, while Madison de Rozario claimed Australia’s first women’s wheelchair title as she snatched victory from four-time champion Tatyana McFadden.

There was more British success in the World Para Athletics Marathon World Cup as Rob Smith won the T51/52 wheelchair contest and Scotsman Derek Rae claimed a first ever World Cup win in the men’s T45/46 race for arm amputees. Before the elites came the Minis, as crowds around the finish line witnessed a course record by Kare Adenegan in the girls’ Under-17 wheelchair event at the Virgin Money Giving Mini London Marathon, while Cera Gemmell delighted fellow Scot and race starter Callum Hawkins by winning the Under-17 girls’ crown.

On a day to celebrate the event’s Spirit of London campaign, it was the Grenfell Tower firefighters from North Kensington and Paddington who best embodied the capital’s enduring heart as they carried the hopes of their stricken community through London’s streets to raise much-needed funds for local campaigns.

Red Watch Manager Mick Dowden spoke for them all when he said at the finish: “We’ve all visualised coming down The Mall, but it was unbelievable, absolutely unbelievable.

“From day one, it’s been an unbelievable journey. It’s so far-reaching. We fully needed it and not just us – for the community and the rest of the London Fire Brigade who attended.”

David Wyeth made it safely to the line in 2:49:14, less than two minutes behind Matt Rees, the man who so famously supported him home in 2017. Rees crossed in 2:47:55 before waiting to greet his new-found friend with a warm embrace.

There were 34 Guinness World Records as runners cautiously braved temperatures of up to 24°C in all manner of fancy dress costumes.

Women’s running pioneer Kathrine Switzer completed her first London Marathon in 4:44:49 at the tender age of 71, while the oldest runner of all, Samuel Starbrook, was some way back in 8:21:44.

Switzer, who started the women’s and World Cup races before running herself, summed up the spirit of the day when she said: “London’s always been there for me. I’m shattered but elated to have taken part today. It’s been a beautiful day.”

British club runners once again turned out in their thousands for the capital marathon and you can read about all the top performances here.