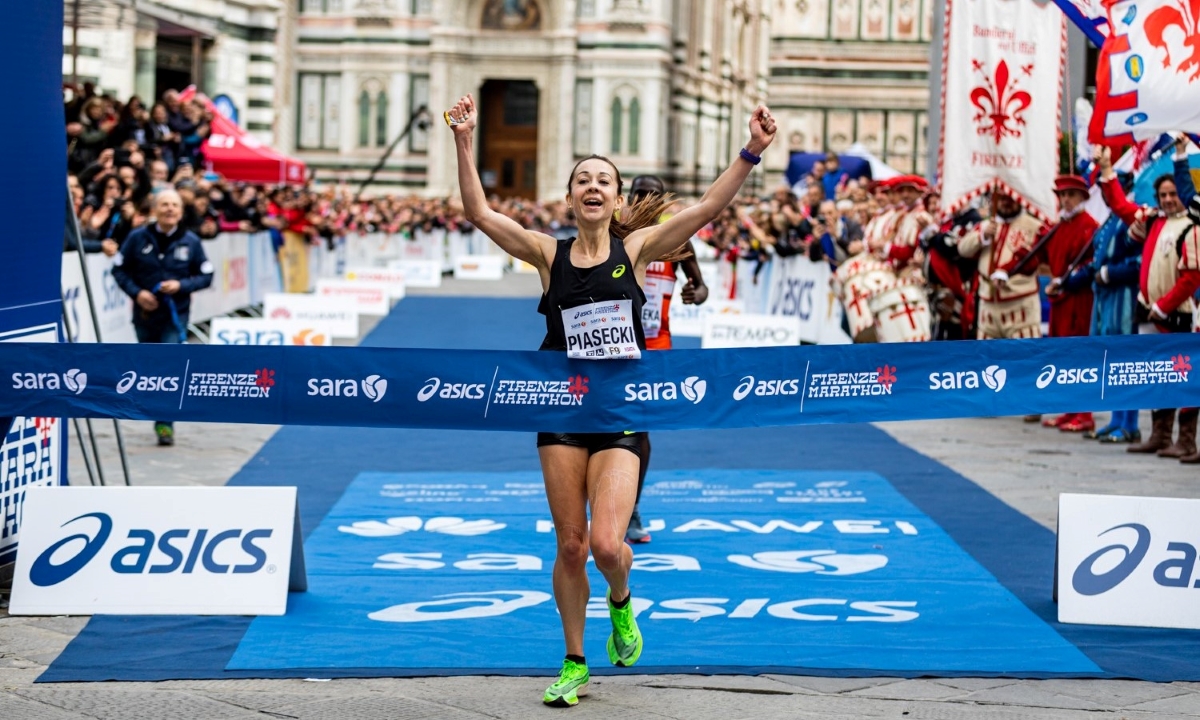 Jess Piasecki should have been racing one of the most exciting London Marathons in recent history this weekend. In only her third marathon start she’d have been lining up as the third fastest British marathoner of all time.

As one of four Brits with an Olympic qualifying time in the bag she was one of the favourites to take a Tokyo spot. Instead, Jess will be at home in Ashbourne on the edge of the Peak District.

She might go out for a long run, possibly with her husband cycling alongside, but she won’t have streets lined with supporters, nor a finish tape to draw her onwards. We caught up with Jess last week and she is stoic about the situation.

“It comes and goes in waves” she says, reflecting the feelings of many of us across the nation. “We’re lucky that my husband and I can still work from home and there’s a lot worse going on right now”.

Like all those she was competing against, Jess was close to peak mileage when the race was called off. Initially the elites were told they would still run a time trial behind closed doors. Not ideal when you’re hoping for the power of the crowd to get you round, but a necessary situation with the Olympics looming and selections to be made.

However, it was only a matter of days later that the UKA cancelled all competitions in April. Athletes were left in limbo as no formal announcement was made to cancel the trials as well and yet it was clear that they couldn’t possibly continue.

Eventually an email arrived confirming what we all knew to be the correct, though disappointing decision. No more trials, no more London Marathon in any form. This was followed shortly after (but long enough to be stressful for those in training) with the announcement that the Olympics would be postponed until 2021.

No stranger to biding her time

So what does the top British marathoner do when her dreams are put on hold? Jess Pisasecki is no stranger to adversity. A promising runner in her early years, a spate of injuries as the result of RED-S included a DNF at Frankfurt marathon when she was on target for Rio qualification time.

She started training again in 2018 and working with Rob Hawkins eventually resumed racing after a period of cautious progression. Promising showings at the Podium 5k and Trafford 10k led onto Cross Country trials and a GB vest.

Then, in Florence at the end of last year she stormed into the UK all-time top five with a 2:25:30, winning the race and earning an Olympic qualifying time in what was her first ever marathon finish. But even after this incredible high she still had further obstacles to overcome.

Throwback to my last race. Whilst current motivation may come and go, it’s moments like these that keep me heading out the door. Excited for whenever racing may resume. #throwbackthursday #stayhome #workfromhome #runfromhome

Jess along with the other three athletes who hit the standard did not pick up an automatic selection for Tokyo. When the London Marathon announced its funding rosta and she wasn’t included. Jess doesn’t make a big deal out of it though.

“Presumably London thought I was on the British Athletics funding, which I might have been but it didn’t happen. So, I didn’t get either”.

She does have local support from the Derbyshire Sport Institute. “They have played a massive role in me staying in one piece and without them I wouldn’t be where I am now. It just shows that it’s never easy to get funding.

It’s frustrating when you’ve had that big breakthrough and sometimes I forget I’m third fastest in the UK ever, but you can’t dwell on it – I just have to let my legs do the talking”.

While she might not be training quite as normal, those legs are ticking over quite nicely for now. Since January Jess has cut down her day-job to three days a week and with the support of coach Robert Hawkins, a nifty home gym built by her husband (containing her favourite kit – a Wattbike), and her local S&C coach, she was building well.

After getting confirmation of the trial’s cancellation she took a week off to mentally and physically reboot. Now she’s back to training and “back to basics, no pressure”. She points out that while it’s a shame not to have a race to prove training has worked, this situation gives us all “the chance to run for the love of it, which a lot of athletes are really appreciating”.

One big impact though has been the lack of physio. Normally she’d see hers once a week but instead they’ve been Skyping and her husband has even been given some lessons so he can do the hands-on stuff. It’s a strange world we live in right now!

Jess is a lecturer in Exercise Physiology at Nottingham Trent researching Masters athletes and neuromuscular function across the menstrual cycle. She also runs a coaching business (RunScience) and is third of the newly launched “Female Athlete Podcast”. Dr Piasecki has plenty to keep her busy in this racing no-man’s-land!

Jess met Fitr’s Georgie Bruinvels through running and work. “ We wanted to do something for ages to raise awareness of female physiology and to keep girls in sport”. After Bruinvels got chatting to sports journalist Lucy Lomax the idea of the podcast was born.

With their own experiences including assisting other top flight sportswomen such as Chelsea Ladies FC, the podcast provides science and experience-based discussions, contains insights from other women in the sporting world and has a Q&A section.

Episodes so far have covered a wide range of topics. Nutrition with regard to menstrual cycles, the effect of Coronavirus-related stress on your cycle and performance. How athletes are adjusting their regimes in lockdown. In the future they will look at the impact of oral contraception. Another interesting area is how training equipment is currently designed using male physiology (the first “female” football boot has recently been released).

Our first episode is out! Available on apple podcasts and all regular platforms. Rate, like, share and subscribe as much as you can. If you want to ask any questions, leave a comment on our @femaleathletepod page. #podcast #podcastlife #femaleathlete #menstrualcycleawareness #menstrualcyclehealth

We discussed the lack of female coaches and the impact it has on young female athletes.

“It would be good to have female role models for young athletes. It might seem odd to talk to a guy about it. Who knows, perhaps it would have changed things if I’d known some of what I do now at an earlier age”.

Thankfully changes are afoot with big names such as Shalane Flanagan, Paula Radcliffe and Liz McColgan coaching. There is also the success of coaches she as Allison Benton and Helen Clitheroe we can point to.

She has no problem raising the subject of her period with her own coach, although she admits that she’s lucky she doesn’t have any major symptoms of her cycle. It is perhaps also a window into her general mindset when she says “I just crack on with the training.

There isn’t enough research to show that there is definitely a performance impact so I don’t make allowances for it in the plan. If I had a bad session and my cycle was the reason I’d just tell my coach that was why it was crap and he’d say ‘ok, move on’. No big dramas, running is simple and that’s how I like it”.

This no-nonsense love of running comes through as Jess speaks – even as she talks about retirement, whenever that might come. It may seem odd to raise that at this early stage in her career but as she says,

“I turned thirty last weekend so I’ve been thinking about it more. I’ll just keep going until training for races becomes a chore. I won’t stop running though, I know I’ll always run”.

With the advice of Jo Pavey, the inspiring performances of Sinead Diver, and Piasecki’s own scientific understanding there’s no way she” be disappearing from top flight running again any time soon.

We finish by talking about the future and what she’s looking forward to. A covid-free world brings smaller desires initially…

“the chance to go to the pub on a Friday, go out for a meal and to see family”

Like the rest of us, she hopes she may be able to do some competitive running in the autumn. For now though there are no races in the diary, not even virtual ones (“if I tried to run the Podium 5k now I think my hamstrings might explode”).

In the meantime she’s working, training and keeping in touch with her own athletes. Once a return to racing is confirmed she and Hawkins will work back to start a structured build-up again. “Hopefully whenever the trials do happen it will be just as it should have been. It’ll happen eventually and hopefully everyone will be in a better place”.

Amen to that. Here’s to the future.

Can you be ‘too fit’?
Chris and Julia Finill – Ever Presents