London Marathon Round up: Charlotte Purdue and Callum Hawkins both finish 10th in PBs 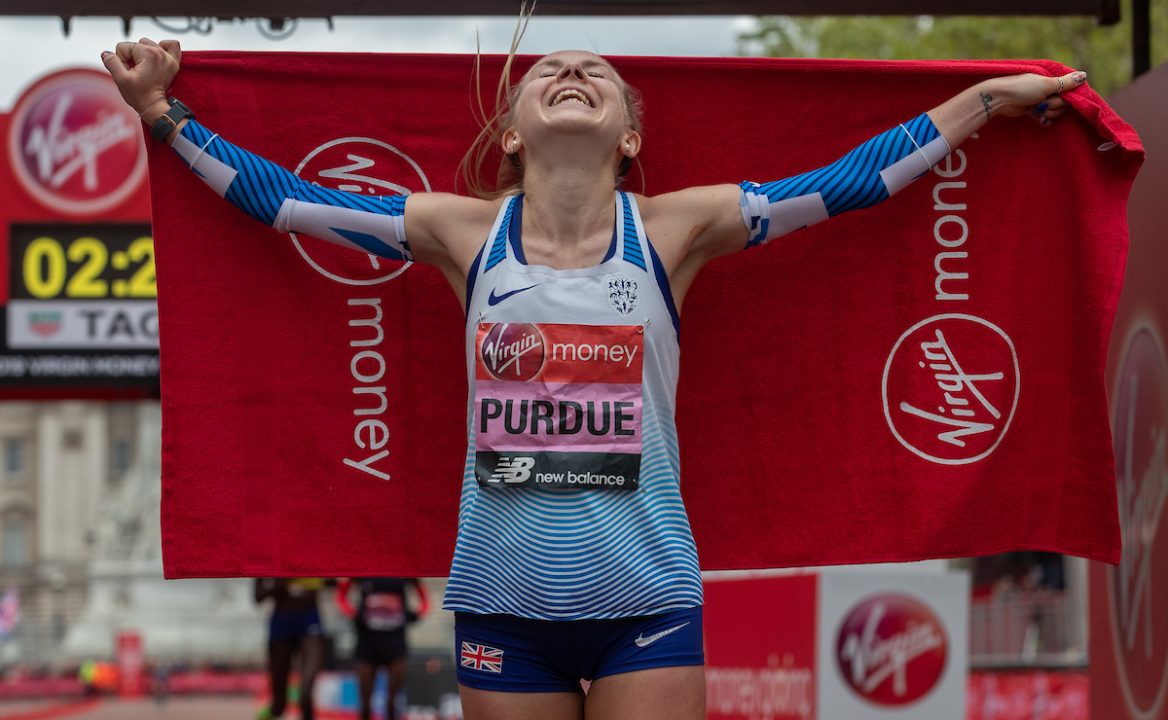 The front of both races had some exciting racing with a slow start in the women’s race capitalised on by Irish-born Australian Sinead Diver leading the first half before Brigid Kosgei of Kenya posted the fastest second half of a marathon ever for a female with a 66:42.

Kossi was ahead with only Vivian Cheruiyot for company in the closing stages but the two Kenyans were eventually separated by almost two minutes with Kosgei’s winning time of 2:18:20 ahead of Cheruiyot’s 2:20:14.

The men’s race was a closer affair with three men, Eluid Kipchoge, Mosinet Geremew and Mule Wasihun, still together at 40km and all on course for sub 2:03 at this stage. At this point Kipchoge, the greatest marathoner of all time, calmly moved across the road to grab his last drink bottle and seemingly stepped it up a gear. Crossing the line with his trademark ear to ear grin in 2:02:37, it looked like he was going to just keep going. Afterwards the humble champion said “It was a very tactical race as everyone was there, but I know how to win this race and I was confident and didn’t feel it was in doubt at any point. I’m happy to make history, I’m happy to make it four wins.”

“The crowd in London is wonderful, in the last Kilometre when everyone is shouting it’s just amazing, it made me so happy to cross the line.”

Geremew set a new Ethiopian record and become the second quickest marathoner of all time, but had to settle for second place on the day as well. The best of British and Irish

There were two British under 2:10 for the first time in a while, with Mo Farah finishing fifth in 2:05:39 and Callum Hawkins posting a huge PB to finish 10th in 2:08:14. Farah seemed to struggle after falling back from the lead group and had a tough day at the office. “I didn’t feel great at the start but I followed the pace maker.” said the multiple Olympic champion. “I felt good at halfway and by twenty miles a gap was there. My aim was to reel them back once the pacemaker dropped out but wasn’t able to.”

Hawkins was on course for under 2:07 for a large part of the race but battled strongly in the closing miles to record a new Scottish record of 2:08:14 that eclipses Alistair Hutton’s 2:09:16 set 34 years ago. The Scot said afterwards that “It felt amazing coming down the Mall and greeted by the crowd, it was tough out there but I felt comfortable throughout, but I don’t feel too comfortable now. I’m delighted with my time and it’s great to have qualified for Tokyo.” Charlotte Purdue ran a brilliantly paced race from the gun, sticking to her pre race plan and digging deep in the final miles to finish 10th and post a smashing PB of 2:25:38 to go third on the British all time list behind only Mara Yamauchi and Paula Radcliffe.

“I didn’t have a time in mind, I was more worried about my place, I don’t normally look at prize money or finishing times but I was really keen to ensure I got into the top 10 and I am so happy that I did this.” said Purdue whilst recovering at the finish. “I’m over the moon to be back in London and to slash my PB.”

“It was difficult in the last mile but I kept telling myself I never have to run again, I just have to finish.” was how the first Brit home convinced herself to keep going. “But I will run again, that’s not me announcing my retirement.”

Tish Jones was the second British female home in exactly 2:31:00, which is the qualifying mark for the world Championships later this year and it seemed Jones was slightly unaware as she celebrated across the line! Another 2:56 knocked off her PB from London last year is a fantastic result for the Belgrave Harrier. Sinead Diver held on for 2:24:11 and seventh place, although there were tweets afterwards to remind that the Irish born athlete was ‘born in Ireland, but made the athlete she is in Australia” and represents her home country. But still plenty of Irish fans were cheering her on from start to finish and she’s got a cracking home accent still.

The quick times missed on the telly

After the top ten had made it home the coverage went straight to the other end of the race and we were denied the chance to see some of the the hardest working athletes cross the finish line.

The women’s elite race did show the finishes of Hayley Carruthers and Lily Partridge who both looked to have less than ideal days, but gave it everything they had. Carruthers had to crawl across the finish line and collapsed shortly after later tweeting that “today I learnt how NOT to run a marathon” but still managed a PB of 2;33:59, whilst Partridge ran 2:31:35 after starting and running for loftier goals under 2:30. Running in the mass start there was a stand-out performance by Stephanie Davis, who ran 2:32:38 to place second in the female rankings for the separate race. Louise Small also ran well in the mass start with a 2:39:43.

For the men there were several excellent performances and PBs in the elite and mass start. Dewi Griffiths was running with Hawkins for a long time but slowed to a 2:11:46 outside of his best, but it is good to see the Welsh runner back racing well over the 26.2 miles.

RELATED: Smiling can make you a better runner