Chris and Julia Finill – Ever Presents 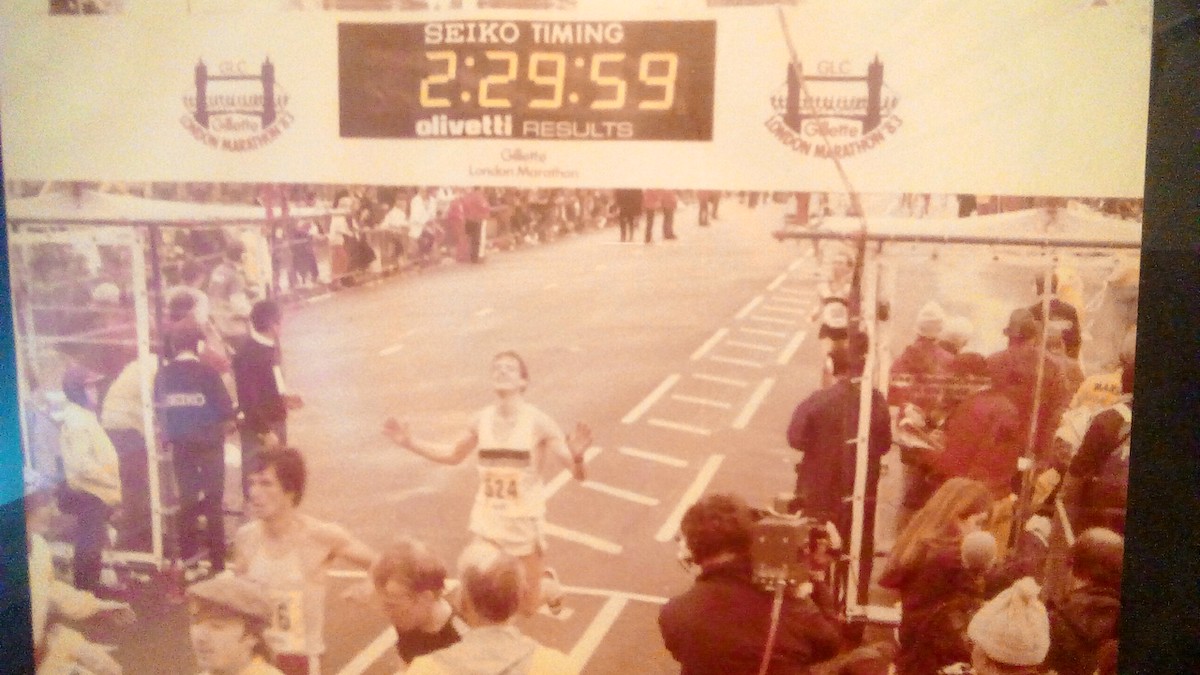 In 1995 a band of 42 men were inducted into an exclusive club – The London Marathon Ever Presents. 10 of them remain.

They sound a little like a troop of superheroes and their youngest member Chris Finill (60, Harrow AC, PB 2:28:27) laughs that their super power, which recently earned them a Spirit of London Award, is “sheer persistence and doggedness”.

With ages ranging from 60 – 85 this select band of runners comprises those who’ve run every London Marathon since its inception in 1981. They have seen the race grow from 7,000 to over 42,000 starting last year.

This year would have been a particularly special one for Finill who holds the World Record for “Most consecutive marathons completed in under three hours (same marathon)”.

He started his London marathon journey with a sub three and didn’t go over that mark until 2013 – making it 33 in a row.

More poignantly though, the 40th running of the London Marathon would have been his chance to become the first European to run under the three hour mark across six decades – he was pipped to the post by a few runners in America earlier this year. He was quietly confident about it too.

“I was running really well, better than I was last year when I ran 2:59”, a claim backed up by an 18:26 in the recent Virtual Road Relays 5k despite no specific training. Commemorative photo for the 30 consecutive sub 3 hour marathons. Photo: Provided by the Finills

A special relationship with London Marathon

It isn’t just Chris that has a special relationship with London Marathon though. Chris is just one half of an ever-present couple who have a unique perspective on the race. His wife Julia, has spectated, run or volunteered as a medal hanger every single year.

The Finills tell me about  their Ever Present journey, recalling that it was in 1989 when the idea to keep running every edition really kicked in. “Someone posted an advertisement in Athletics Weekly asking if anyone had run all 9 so far and was going to take part in the 10th one that year” says Chris.

“Answering that advert led to a trip to some hotel in Euston where a host of 9-timers gathered and we were rather presumptuously given T-shirts which said “I’ve done all 10”.

At that point he decided that this was something worth pursuing, though it wasn’t until 1995 and the 15th running of the race that London Marathon themselves initiated the concept of the Ever Present and awarded the 42 men who had competed annually with a special commemorative medal.

The Spirit of London Award

Fast forward a few years and a commemorative plaque was issued to those who made it to 21, another award at 35 and now as 40 looms large the Spirit of London is the latest award for the remaining 10  – one which they share with the likes of Paula Radcliffe, David Weir, Dick Beardsley and Inge Simonsen (joint winners of the first race) and Katherine Schwitzer.

When you’ve been at so many editions of the same race it’s natural for them to merge together but there have been some stand out moments for this Surrey-based running family. The event is always a family affair for Chris and Julia, with her sister Sue joining for this photo after the 30th race. Photo: Provided by the Finills

For Julia her first year on the medal hanging team was an  experience she’ll never forget. She was granted a place on the finish line crew thanks to her long standing association with grass roots athletics. It was just wonderful, she says, “I spent the majority of my time in tears because I empathise so much with the people crossing the line, I just rejoiced for them and with them. I was with a great group of people.

The most positive experience you can possibly have at any race. You get to see the mini marathoners and the winners and all the other runners come in, the whole atmosphere is just great”.

Keeping it in the family, their daughter Joanna who also runs for Harrow AC was a medal hanger in 2018. It meant that she was able to see both her mum and dad at the end of their runs, though perhaps not in the way that she’d hoped: 2018 was memorable not just for the heat but also for the fact that Chris broke his arm 3 and a half miles into the race and ran the remainder of it in a sling.

After he finished in 3 hrs 45 minutes Jo helped take her dad to the medical tent where he was patched up and sent off to hospital for a quadruple fracture. Clearly not a photo of the perfect race, but Finill still got the race done. Photo: Provided by the Finills

Chris’s favourite memories are, understandably, not from 2018 but rather a couple of “bizarre moments”.

One, when he overtook Cuba’s Alberto Juantorena (the 1976 400m and 800m olympic champion) and another when he ran side by side with Steve Cram “until around mile 18 when he pulled away and eventually beat me by a few minutes.

That led  to a fantastic moment captured on camera with Finill and Cram side by side striding over London Bridge.

The best part of London?

Yet when asked what the spot is that he most looks forward to in the race his response is rather more personal and one which fits entirely with his performance-focussed attitude:

“The one spot I absolutely gauge my running by is a particular point at about 14 and a half miles – you turn right to the Isle of Dogs and there’s an underpass and a roundabout. I factor in a short comfort break and then emerge from the dimness and seclusion of this part of the course thinking ‘Yes this feels about right, I’ll carry on drinking at the rate I’ve been drinking and and I’ll be ok’.

For Julia, Cleopatra’s Needle is her prime spot  – not one for dashing around the place, she has honed her spectating skills so that she can set the sub three metronome off at Greenwich and make it to Embankment to see the leaders come through before catching Chris.

Never once has she missed seeing him on the route. “To me his running style stands out a mile, so I notice him easily” and they giggle about her tongue-in-cheek description of his style as “sleek and flowing” – “It’s like someone’s signature” says Chris.

Involved behind the scenes

Bearing in mind their years of insights, it’s interesting to learn how the organisers engage the Ever Presents in the behind the scenes aspects of the race.

In February this year the remaining 10 were invited to London Marathon HQ for the launch day of the 2020 event. They were kitted out in New Balance gear and presented to the press for interview, to share their years of experience. “It was also the first time the 10 of us had been together in a really sedate way rather than in a frenzied moment before the race starts and it was lovely to have the entire day to mingle and enjoy each other’s company”, says Chris.

“When I told them about the six-decade challenge they arranged to have a pair of New Balance’s new performance shoes sent over from America. My legs feel about 10 years younger in them!”.

Asked if they’ve got any suggestions on what could be improved in the race, the couple are magnanimous: “They’re the experts when it comes to the logistics”. They praise the way the organisers “use runners or people connected to running to volunteer and administer things like the baggage buses, which work so well”.

“It would be a shame if they changed that and started to professionalise it in a way that relied less on willing volunteers who understand running events”.

A few medals collected over the years and more have been added since this in 2016. Photo: Provided by the Finills

One suggestion they have made though, is to make more of the history of the event. “I did sidle up to Hugh Brasher CBE (Co-founder) to suggest that they copy the Comrades marathon who have a house dedicated to memorabilia” says Chris.

As an experienced Ultra runner he is particularly impressed with the way Comrades operates, with their green bib-numbers which are permanently allocated to a runner after they have participated 10 times. He ponders whether this approach is something London might consider, and comments “London hasn’t really cottoned on to that side of things yet and maybe that’s because it’s only been going since ‘81 compared to 1921 for Comrades or 1897 for Boston. It’s a work in progress”.

Neither of them are about to have their heads turned by other marathons though.

Not all marathons are created equal

In the past it was Chris’s ultra training that stopped him from defecting and London was just “the thing which came around every April and I ran it”, but now he’s fully committed. Other marathons just don’t compare.

“I’ve done New York twice – once in 1990 with a broken toe and once in 2011 off 285 miles in the previous 7 days (astonishingly, he had just run across America to get to the startline) and perhaps there was a different kind of electricity to that event but I think that’s because it’s somewhere new.

If London seems more low key it’s just because it’s familiar. I think Brits don’t take it as seriously, in a good way. The standard is just as high or higher but there is that element of charitable fundraising which lends a unique charm to the event that means it’s not too far up itself”. Julia agrees, “There is a human side to it as well as an athletics race, which I like”.

So, they will bide their time and whenever the 40th edition does roll around they’ll be there, ever present, running and supporting. In the meantime they are taking the chance to run together more on the trails of the Downs Link in Surrey. Julia has her own virtual challenge, to run 70 miles this month in celebration of a significant birthday, and Chris is keeping things ticking over.

With a son based in Madrid and very much in the middle of the Covid-19 crisis they are just grateful to be able to get out and about.

They had planned to attend the annual lunch which the Ever Presents organise each summer after the race but instead there’ll “be a call or Zoom or something on race day, we’ll certainly be in touch”.

The idea of all 42 on Zoom is an amusing one but is a testament to how running has a habit of throwing  people together and knitting them into a community for life. Individually, Chris will “probably mark race day by going for a conciliatory run up the railway. I’ll feel sorry for himself and think how it might have been” he laughs. “But the big day will come round soon enough and when it eventually does take place, whenever that is,  it’ll be a massive party for sure”.

Chris Finill was born in Harrow in 1958 and has been a competitive runner since the age of 12. He won the English Championships at 100 kilometres and 24  hours in 2003 and 2008 respectively and has represented Great Britain 8 times  in these events.

Both he, Julia and their daughter run for Harrow AC.  In 2011 Chris ran across America with Steve Pope, a new book “Across America on Foot” which features a chapter on their adventure is out now.

The remaining runners of the Ever Presents in 2019 were: