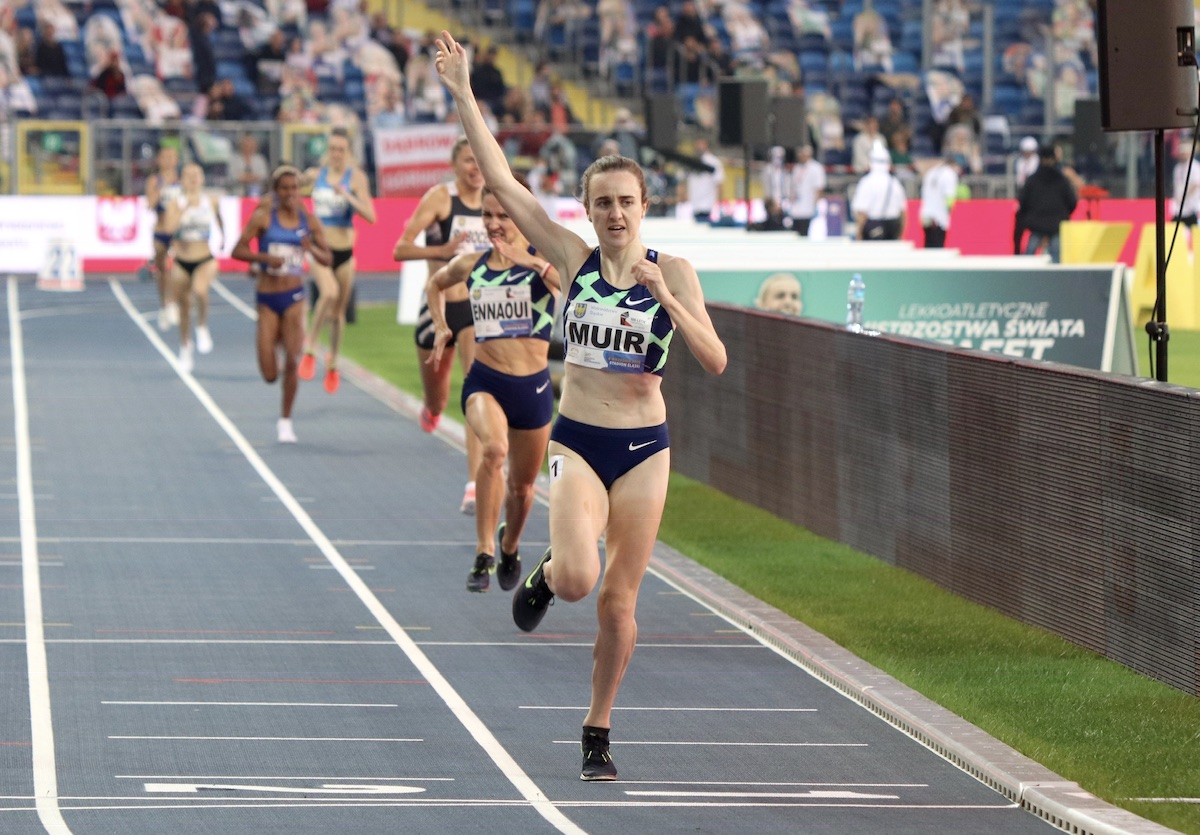 My second favourite sport is F1. I like to quote an iconic radio message from Kimi Raikkonen when a car crashed and flew over his head– “woah, what was that?”. It was certainly that applicable to yesterday’s Meeting Hauts de France Pas de Calais in Lievin, France – the second stop on the World Indoor Tour (Gold) Series.

It’s fair to say that, if the world has been a little starved of track-based athletics over recent months, last night’s meeting in northern France decided it was its role to deliver enough noteworthy performances to fill the gap of the last few months.

A World Record, European Record, Meeting Record, National Records. Throw in some dubious pacemaking, timekeeping and not-quite-right onscreen graphics – it had the lot.

I’ve tried to take you through the highlights, chronologically, of the evening’s endurance races. Much like a classic track race, it started slowly and picked up pace as the meet went on.

A steeplechase, indoors? No, me neither. However, the evening’s action kicked off with the rarely run event, sadly long before the World Feed had started.

Bahrain’s Winifred Mutile Yavi broke the World Best (5:45.09), bettering the previously held time of Slovenia’s Marusa Mismas, set at the same meeting last year, by over two seconds. A sign of things to come later in the evening? Well…

The first race of the evening (to be shown on the World Feed at least) was the one most anticipated by British endurance fans – Jemma Reekie up against Keely Hodgkinson in the 800m.

Jemma’s first race since the Doha Diamond League last September, and a year on from her standout 1:57.91 NR last February, with Keely fresh off a 1:59.01 World U20 Record (to be ratified) last weekend in Vienna.

Funnily enough, they have only raced each other once before, over 800m at a BMC meet in Manchester in 2018, where Jemma won by just over a second. Maybe not too dissimilar two and a half years on. Lots to come I am sure from both. Ireland’s Nadia Power ran a strong race for second in the ‘B’ race (2:03:84). Whenever Sifan Hassan runs, you feel it is a race worth watching. This was her first indoor race since the World Indoor Championships in Birmingham in 2018, where she took silver over 3000m and bronze over 1500m.

Since then she’s completed a historic 1500m and 10,000m double at the World Championships (running 3:51 in the process), run the fourth fastest 10,000m of all time in the pouring rain in Hengelo and broke the One Hour World Record.

In a fast, but slow when compared to other races last night, race, it was a close battle with Would U18 Champion Lemlem Hailu and 3000mSC World Record holder Beatrice Chepkoech until 150m to go, when Hailu put in a burst of speed to build an unassailable gap to win in 8:32.55 ahead of Hassan’s 8:33.62 and Chepkoech’s 8:34.21. Four women behind set PBs.

What do two 800m races with a host of star names have in common? Questionable pacemaking, with both races going through 200m in sub-25 seconds. As was soon after demonstrated, this is a lesson in how not to run an 800m.

Unless your name is Wilson Kipketer, I guess, who went through 24.22 en route to his still-standing 1:42.67 indoor World Record.

Elliot Giles managed the early pace well, continuing his stellar start to the year with a comfortable 1:45.49 to win by over a second; that’s his second fastest indoors and only 0.03 off his PB. You can’t help but feel Sebastian Coe’s National Record of 1:44.91 set back in 1983 is on borrowed time.

“I Guess I’m Faster Than Him”

Here starts the surreal performances. Jakob Ingebrigtsen is one of the most fearless runners I’ve ever seen. Just goes for it, no fear. Sometimes it works for him, sometimes it doesn’t (the Doha World Championships being a prime example of the latter).

It turned out 7.5 laps in a field including Samuel Tefera (WR holder), Marcin Lewandowski (2019 Worlds Bronze), Filip Ingebrigtsen (2017 Worlds Bronze) and Bethwell Birgen (2018 World Indoors 3000m Bronze) was one that would very much work for him.

Frontrunning from the start in an incredible 3:31.80 – FIVE seconds ahead of the second finisher. That puts him fifth fastest ever indoors over 1500m and gave him the European Record (previously Andres Diaz’s 3:33.32 set in 1999) and Meeting Record (Hicham El Guerrouj in 1998).

To put that run into context, Jakob wasn’t born when those two performances happened, although as he said in the post-race interview, “I Guess I’m Faster Than Him”!

Five men behind set PBs, including 3:37.20 for Ireland’s Andrew Coscoran, not too far behind Marcus O’Sullivan’s 1988 NR. Barely had one had time to comprehend that 1500m before the men took to the track for double the distance. Tim Hutchings on commentary noted there was a goal to aim for Haile Gebreselassi’e 7:31.25 Meeting Record, whilst sub-7:30 would put you in the top-10 alltime. It sounded ambitious, given no man has run sub-7:27 indoors this millennium.

Metronomic 29-30 second laps ensued, bang on Meeting Record pace. Ethiopia’s Getnet Wale, Selemon Barega and Lemecha Girma took it in turns to lead, with the pace cranking up with three laps to go. Sub-7:30, possibly 7:28 looked possible with two to go, especially when Girma put in a significant burst of speed about 300m to go, before slowing after the bell. I think he miscounted 14 laps as 15.

Wale held on to win – but the onscreen graphic clock had stopped early at 7:20 – clearly a mistake, but no correct time appeared for a fair while.

Turns out he had run 7:24.98 – just eight hundredths off Daniel Komen’s World Record, which has stood since I was five years old. Second fastest of all time indoors, third fastest all time combined, with Barega (7:26.10) and Girma (7:29.98) slotting in third and sixth on the all-time indoor list respectively.

Seven of the 13 finishers set PBs, with Mike Foppen setting a Dutch National Record – the tenth Dutch Record in 2021. A genuinely exciting race that rewrote the history books. Of all the races, this is the one to rewatch. Leaving the best till last? Absolutely. There’s not much to say, other than Gudaf Tsegay ran ahead of the pacemakers to obliterate Genzebe Dibaba’s World Record by over two seconds, running a hard-to-comprehend 3:53.09.

She went through 800m in 2:05, which had all the signs of following the men’s 800m in going too fast too soon. But she only got faster.

Laura Muir ran a British Record in 3:59.58, which puts her fifth on the all time indoor list, whilst Melissa Courtney Bryant ran a ten second PB of 4:04.79 and Welsh record for third in her first indoor 1500m since 2015, putting her fourth on the British all-time list behind Laura, Jemma Reekie and Kelly Holmes. She’s only run faster outdoors four times! I’ll end with an honourable mention for Grant Holloway, who ran the second fastest 60m Hurdles of all time (7.32), just 0.02 off Colin Jackson’s World Record – in a race that started almost half an hour after initially planned. With less waiting around, you can’t help but feel that World Record will be lowered soon.

Looking back, it’s hard to believe all that happened in the space of two hours. It is a shame COVID-19 means no fans could be present, they’d have witnessed a truly magical night of athletics.

Putting all other concerns or debates or thoughts aside, just when you thought the performances couldn’t get any better? They did. Roll on the next World Indoor Tour stops in Boston (Saturday 13th) and Torun (Wednesday 17th).