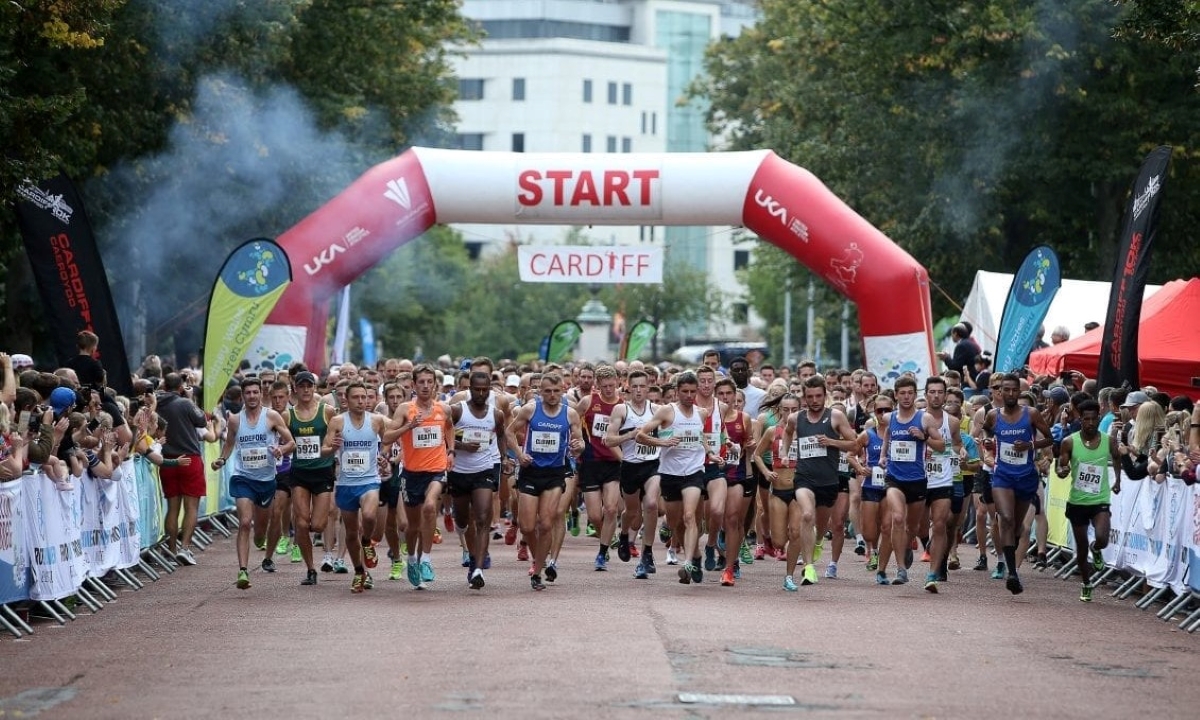 Wales’ largest 10km race will attract 7,000 runners to compete around the flat and fast course in the Welsh Capital. The elite fields this year feature a host of names who have competed at major championships and the conditions look set for fast times.

Gemma Steel of Charnwood AC has the fastest PB in the women’s race with a best of 31:26 which places her third on the UK all-time list. The 2014 European Cross Country Champion will face some major Welsh competition however led by Cardiff AC’s Charlotte Arter who is the second fastest Welsh athlete of all time with a 32:17 best set at Brighton in 2018. Arter will only need to shave two seconds of that mark to re-set the record held by Angela Tooby in 1984.

2019 UK Inter-Counties Cross Country Champion, Jenny Nesbitt is a club mate and training partner of Arter and will also be in action on Sunday. A third Cardiff athlete, Clara Evans will add further strength to the Welsh contingent here. The 25 year old is enjoying somewhat of a breakthrough this year following a 72:52 clocking for Half Marathon set at Barcelona in February. Barlow, Law and Damen will be challengers

World and European Championship marathon runner Tracy Barlow of Thames Valley Harriers is a twice winner at the JCP Swansea Half Marathon and will be looking to revise her 10km PB of 33:21. Barlow is joined by 2018 English and UK Inter-Counties Cross Country Champion Phoebe Law of Kingston & Poly AC and Louise Damen of Winchester AC who took the same honours in 2013 and finished 7th at the 2014 Commonwealth Games Marathon. Law has a 10k best of 33:11 and Damen has a 32:41 clocking to her credit.

Sophie Harris of Swansea Harriers and Welsh 800m & 1,500m Champion Jade Williams of Amman Valley Harriers will also be in action. Marathoner Natasha Cockram of MMRT is another athlete who is enjoying a fine run of form which includes 2019 victories at Porthcawl, Barry and Vienna.

Kate Maltby of Bristol & West AC and Sophie Cowper of Rotherham AC are two further sub 34 minute performers worthy of a mention and capable of upsetting some of the races big name entries. Local club Cardiff AC will provide six sub 30 men to the race, led by Club Captain Matt Clowes. He is the fastest of the club men on paper having run 29:19 in the past and will target an 11thrace victory of 2019 in his home town. Jake Smith has a time of 29:01 over 10,000m to his merit, achieved whilst on GB duty at the European U23 Championships in Gavle.

Kevin Seaward was fourth at the Commonwealth Games Marathon last year running for Northern Ireland and a lifetime best over half marathon in February shows promising 2019 form. Seaward along with Clowes will use this race as preparation for the BMW Berlin Marathon later in September. Sub 30 quality throughout the elite field

Ciaran Lewis and James Hunt both dipped under 30 minutes in 2019 with Lewis running 29:47 at the Brecon Carreg Cardiff Bay Run and Hunt setting his P.B. at 29:58 at the Healthspan Porthcawl 10k in July.

Sub four minute miler Tom Marshall is the final Cardiff man with proven calibre over 10km’s who will race on Sunday during a fitness comeback that will see him making a welcome return to racing on the roads.

Aldershot Farnham & District’s Josh Grace finished seventh at the race in 2017 but as a regular sub 30 minute performer is likely to be nearer the front this time. Shaun Antell of Bideford AC stormed to a 29:13 best for the distance at the Brighton Marathon 10k race in April and on Welsh soil in May at the ABP Newport 10k.

Are you a fan of Fast Running? Then please support us. For as little as the price of a monthly magazine you can support Fast Running – and it only takes a minute. Thank you.
More onCharlotte Artergemma steelKevin SeawardMatt ClowesTracy Barlow