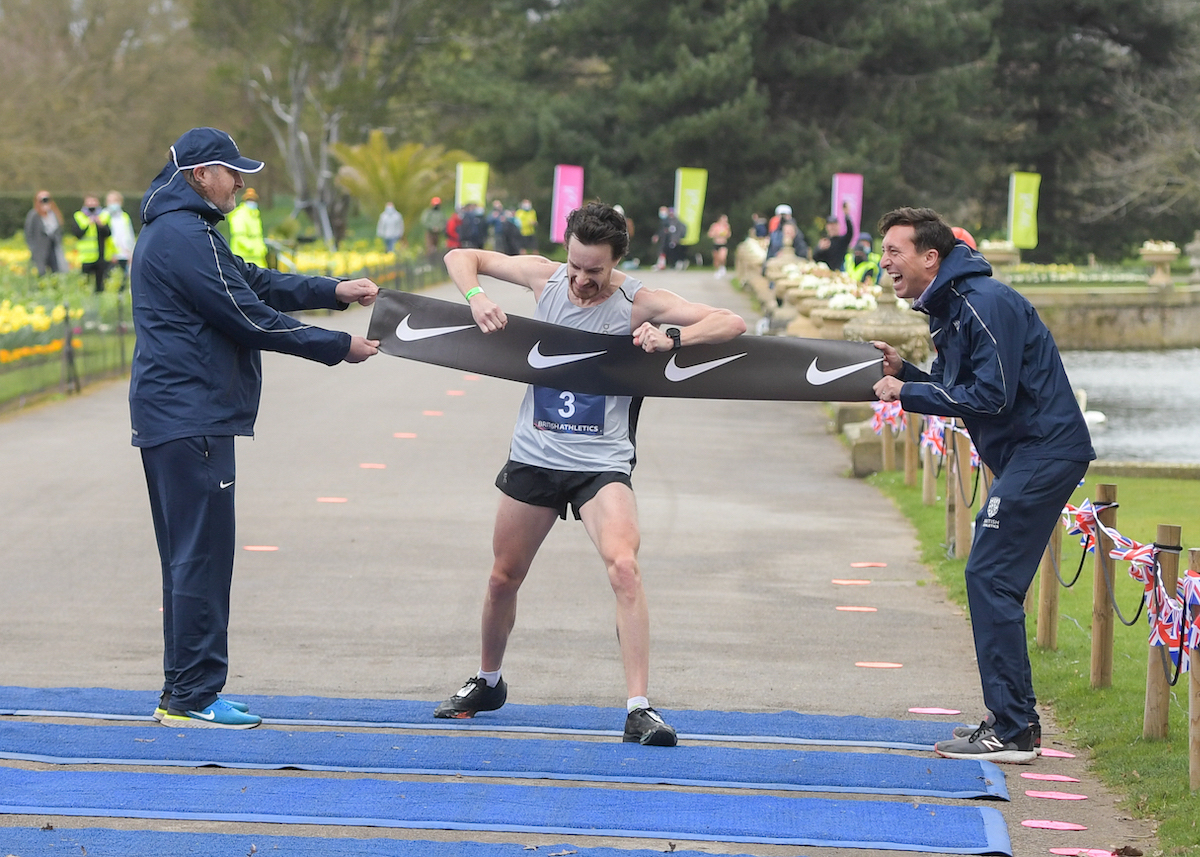 Kew, England. 4 January, 2016. Men's marathon winner Christopher Thompson crosses the line and celebrates an amazing week. He has become a father and qualifies for the Tokyo Olympics at the age of 39. Race director Tom Bedford (right) celebrates with him at the Muller British Athletics Marathon and 20km Walk Trials. Credit: Nigel Bramley

UK Athletics has today announced the first British athletes to be selected for this summer’s World Athletics Championships in Eugene, Oregon (15-24 July).

Five marathon athletes will represent Great Britain and Northern Ireland in the men’s and women’s races which are due to take place on the 17th and 18th July respectively.

Olympians Jess Piasecki (coach: Robert Hawkins, club: Stockport) and Chris Thompson (Aldershot Farnham and District) are among those included in the team for Oregon 2022.

Piasecki recently moved to second in the UK all-time women’s rankings after running a time of 2:22.25 at the Seville marathon, which leaves her behind only Paula Radcliffe in the standings.

She will be joined in the women’s race by Charlotte Purdue (Nic Bideau, Aldershot Farnham and District) who ran a personal best of 2:23.26 at the London Marathon last October. Also, Rose Harvey (Phillip Kissi, Clapham Chasers) has earned her spot in her first British team following a PB performance of 2:27.17 in Seville last month. In the men’s race, 40-year-old Chris Thompson (Aldershot Farnham and District) will compete at his first World Championships. He was the top British athlete in the men’s 2020 Olympic marathon and he topped the UK rankings last year with a time of 2:10.52, which was a lifetime best.

Welshman Josh Griffiths (Swansea) is called-up for his second World Athletics Championships having also competed in 2017. He impressed at the Seville marathon last month as he ran a career best of 2:11.28.

Jake Smith did not wish to be considered for selection for the men’s marathon.

“We are really pleased to be announcing our first five athletes for this summer’s World Athletics Championships in Oregon. This is a significant milestone, and I am delighted to be welcoming these athletes onto the British team to represent the country in July.

“We’ve seen some excellent performances from our marathon runners in recent weeks and months, which led to a really competitive selection. It is a great to have experienced marathon runners on the team, and also a new face in Rose who will be making her debut in a British vest. They’ve all earned their place on the squad, so I wish them all the best as they prepare for the championships.”