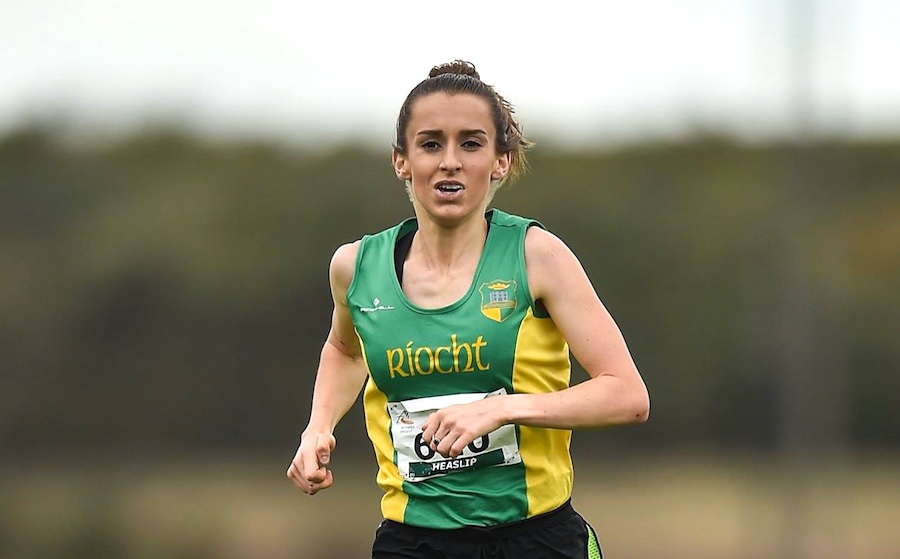 Double European cross country champion Fionnuala McCormack of Kilcoole AC had initially been named as a starter but doesn’t appear on the entry list. Last year, she ran a race in Spain on the same day in preparation for the European Championships.

Heaslip, from Kerry club Riocht, is an emerging talent and finished second in a strong field at the Crosscup International in Mol a few weeks ago.

Among those she’ll take on is Michelle Finn, who ran a blistering two-mile leg to ensure victory for UL at last weekend’s Irish Universities Road Relays. Then there’s Kerry O’Flaherty of Newcastle AC, a best ever 15th at the recent Burgos international cross country in Spain, and recently crowned Dublin champion Ciara Durkan of Skerries.

Her Riocht clubmate, Laura Crowe, Anne Marie McGlynn and Caitriona Jennings for Letterkenny AC, and the reliable Sinead O’Doherty of Borrisokane are also listed among the entries.

As for the men, with defending champion Mark Christie of Mullingar absent through illness and three times champion Mick Clohisey of Raheny Shamrock nursing an injury, the race is wide open.

Form athletes at the moment include Leevale’s Mark Hanrahan of Leevale, third last year, and Raheny brothers Conor and Kevin Dooney, although Kevin has had minor injury problems. Paul Pollock of Annadale Striders, twice winner of the intercounty title and fifth in this race last year, most recently ran 29 mins 20 secs at the Leeds Abbey Dash 10km.

When it comes to the team race, following eight second places in eleven years, Raheny Shamrock finally nailed down the title last year. At the Dublin Championships a few weeks ago, their winning team was led home by Conor Dooney in second place. Clonliffe Harriers, winners in 11 of the past 14 years, have named a squad of 18, which includes marathon men Sergiu Ciobanu, Stephen Scullion and Gary O’Hanlon.

Last year, Dundrum South Dublin won the women’s title for the eleventh time in the past 17 years and the named squad includes Meghan Ryan, Maria McCambridge, Sarah Mulligan, Fiona Clinton and Niamh Devlin, all members of the winning team at the Dublin Championships. Also listed is Linda Byrne who has been racing regularly at BHAA level over the past year.

Michelle Finn leads a strong Leevale squad with Claire McCarthy, Carol Finn and Lizzie Lee, who has made a return to racing in recent weeks, also likely to run. Leevale won the title in 2015.

Among the leading U23 men’s entries are DSD’s Killian Mooney and Eoin Strutt of Raheny Shamrock. In the junior ranks, Bantry’s Darragh McElhinney won the U18 title last year and was first in the junior race at the Autumn Open.

A strong entry is expected for the junior women’s 4,000m race where Laura Nicolson and Fiona Everard of Bandon AC, Siobhra O’Flaherty of St LOT, Stephanie Cotter of West Muskerry and Avril Deegan of Ballyroan Abbeyleix and District are among the contenders. Returning from the USA for the race is Emma O’Brien of Sli Cualann. Many of these athletes are also named for their county teams.

With three athletes to count for the team at the Europeans in Slovakia next month, the top two in Sunday’s senior and junior races will gain automatic selection. Only the winning U23 athletes are guaranteed selection.

New at the Europeans this year is a mixed relay for teams of two men and two women, who each will run a lap of about 1.5km. A team will be selected for this only if it has a reasonable chance of taking a medal and if the cross country teams are unaffected. Teams are to be announced next Monday.