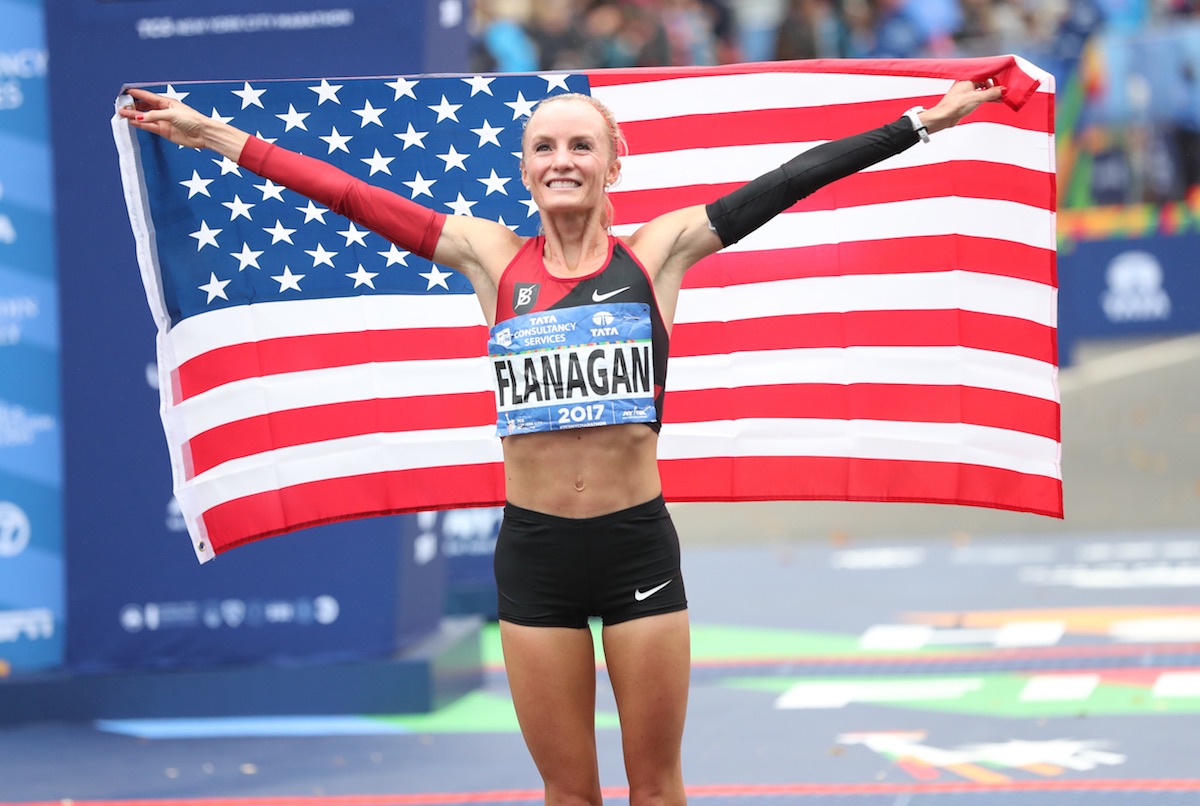 The reigning marathon champions will return to the Big Apple this November.

American Shalane Flanagan and Geoffrey Kamworor of Kenya will aim to successfully retain their titles at the New York City Marathon on Sunday, November 4.

At last year’s race, Flanagan became the first American woman to win the women’s race in New York since Miki Gorman did so in 1977, while Kamworor claimed his first major marathon victory in the men’s race.

Manuela Schär and Marcel Hug of Switzerland will also return to defend their titles. Last year, Hug and Schär both won their fourth major marathon victories of the year with a Swiss sweep of the wheelchair division.

“When I think about returning to race in New York City, I’m flooded with magical memories,” said Flanagan, who ended a 40-year drought for American women after claiming the crown from Kenya’s Mary Keitany with a time of 2:26:53.

“My heart skips a beat, I get butterflies in my stomach, and my palms get sweaty. New York City is incredibly special to me. It’s where I ran my first marathon in 2010, placing second, and of course, my dream moment in 2017 when I won the TCS New York City Marathon.

“I’m thrilled to have the opportunity, support, passion, and health to defend my title in 2018. I hope everyone preparing enjoys their journey to the start line and I look forward to celebrating with all the runners at the finish line on November 4th.”

With her first victory in just her second appearance at the New York City Marathon – she was runner-up in her marathon debut in 2010 – Flanagan became the sixth U.S. women’s champion in the event and recorded the second-fastest time by a U.S. woman at the event.

The 16-time national champion and Olympic silver medalist will be racing again this year as an NYRR Team for Kids Ambassador. In the women’s open division, Flanagan will join previously announced Des Linden, the 2018 Boston Marathon champion, and Allie Kieffer, the fifth-place finisher at last year’s New York City Marathon.

Kamworor claimed his first major marathon victory last year when he held off compatriot Wilson Kipsang down the final turns in Central Park. The 2015 TCS New York City Marathon runner-up separated himself from the field with a 4:31 penultimate mile to finish in 2:10:53.

“Racing once more in the TCS New York City Marathon means so much to me,” said the 25 year-old. “It is my favourite race, and although thousands of miles separate my training base in Kaptagat, Kenya to New York, the event feels like home.

“I say that because of the friendly nature of the event, the terrific organization and also because of the warmth I feel from the many thousands of supporters lining the route.”

The Kenyan has won the last three consecutive IAAF World Half-Marathon Championships and placed 11th in the 10,000 meters at the Rio 2016 Olympics. He recorded three consecutive sub-2:07 performances at the BMW Berlin Marathon from 2012-2014, with his 2012 race of 2:06:12 remaining his personal best.

Peter Ciaccia, president of events for NYRR and race director of the TCS New York City Marathon said: “Last year was one for the ages, with Shalane making history, Geoffrey having a breakthrough race, and Manuela and Marcel becoming the first winning pair from the same country to sweep the wheelchair division.

“We are excited to have all four of our TCS New York City Marathon champions – Shalane, Geoffrey, Manuela, and Marcel – returning to defend their titles at the world’s largest marathon.

“Together, this group of all-time greats will headline our professional athlete races and lead the 50,000-plus runners behind them as they thrill the more than 1 million spectators that line the course. We can fully expect another electrifying race this year.”