Seven finish under 2:05 as records fall at Dubai Marathon 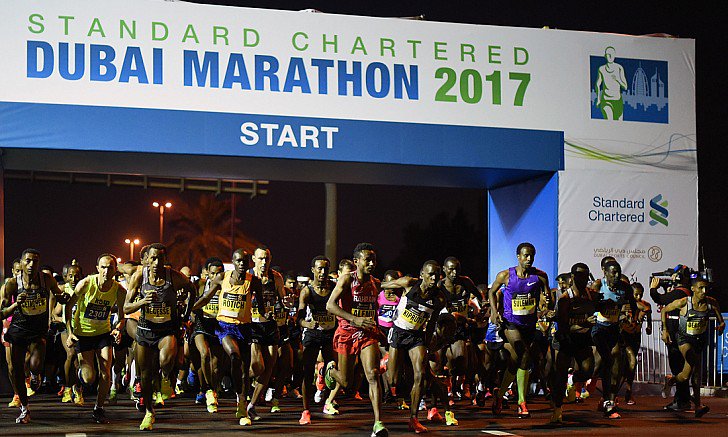 Mosinet Geremew won a thrilling battle to win the Dubai Marathon ahead of his Ethiopian compatriots on Friday (January 26).

Geremew, 25, clinched victory in a course record 2:04:00, leading a sprint finish down the homestretch with any of six men in contention to win the $200,000 first-place prize.

The top six incredibly all finished between 2:04:00 and 2:04:15, with seven under the 2:05 barrier. Last year’s winner and race favourite Tamirat Tola finished third, with Leul Gebresilase second. Gebresilase, who was running his first marathon, moves to number two on the all-time fastest debuts list with 2:04:02.

The top ten spots in the men’s race were all Ethiopian athletes, with the tenth man the first over the 2:10 mark.

It wasn’t all about the men though, with the women’s marathon equally impressing, with four breaking 2:20. Ethiopia’s Roza Dereje led the charge to the finish line to win in 2:19:17, ahead of her compatriot’s Feyse Tadese in 2:19:30, Yebrgual Melese, and defending champion Worknesh Degefa in 2:19:53.

Dereje time was also a course record in Dubai. Four sub 2:20 finishers is also the most ever in one race, in fact, compared to 2017, only three women ran under the mark in total.