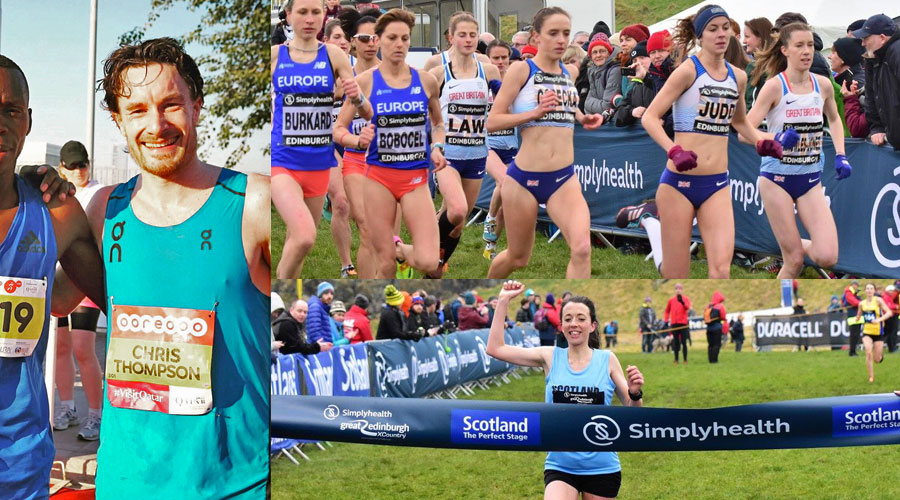 While cross country took centre stage this weekend in Edinburgh, there was excellent running elsewhere in Britain and further afield on the roads, hills and indoors.

At Holyrood Park in Edinburgh, Laura Muir anchored the GB quartet to relay glory and Emelia Gorecka battled all the way to finish only two seconds behind the European Cross Country champion. An in-depth report can be found here.

Britain’s Chris Thompson started his 2018 campaign on Friday (Jan 12) in the half marathon event at the Doha Marathon. After a successful end to 2017, winning both the Great Scottish and Great South events, Thompson continued his form with a strong third-place finish and a time of 63:03.

The race was won by Kenyan athlete Alex Kibet in 61:53 with his fellow countryman Benard Korir second with 62:07. Mo Farah was set to feature but withdrew after warming up due to reported Achilles discomfort.

In the women’s half marathon event, Gemma Steel placed second in 72.37. The Charnwood athlete has been enjoying a training stint with Elisha McColgan in the warmer climate of Qatar. McColgan also rounded the trip by racing the Doha 10km event. In a fantastic performance McColgan ran 31:50 for a new personal best and taking her to tenth on the British overall list, the Dundee Hawkhill Harrier also gave most of the men a run for their money by finishing third overall.

Away from the international match, Scottish regional teams and the North of England also battled it out in Holyrood Park on Saturday. In the men’s event Kristian Jones of Dundee Hawkhill Harriers was a clear winner. Jones came home in a time of 25:55, next finisher was Lachlan Oates (Shettleston) in 26:31. In a close race for third Logan Rees (University of Edinburgh) just pipped Alastair Hay (Central AC) by one second with 26:35 and 26:36 respectively. Inverclyde’s Andrew Douglas was fifth in 26:46.

The women’s race was won by Fionnuala Ross in 22:27. The Shettleston Harrier was seven seconds clear of Abbie Donnelly (Lincoln Wellington) with Leeds City’s Georgia Malir in third with a time of 22:41. Fourth place went to Kilbarchan Elspeth Curran and fifth was Rebecca Burns of Edinburgh AC.

Fresh off the back of his win at the Greater Manchester County Championships last weekend, Andy Norman continued his rich vein of form winning his first Manchester league of the four fixtures so far this season. Last weekends win came 12 years after the Altrincham athlete first won the senior Championships and after long periods of injury, Andy is enjoying his running, prioritising being pain-free and making a welcome return to the top of local races.

Behind Norman came Mike Cayton (Horwich RMI) in second, 21 seconds adrift and Mathew Barnes of Sale Harriers third. Andy was the first of the Norman clan to finish as his older brother Dave came in 12th overall with their father and 1976 Olympic marathoner Geoff finishing 334th and second vet 70.

In the women’s event, Salford Harrier Ruth Jones won by over 30 seconds from Gemma Connolly of St Helens. Sarah Stockman (Macclesfield) was next in third.

The women’s winner was equally as impressive as Katie Walshaw of Ribble Valley Harriers finished a brilliant fifth overall in the race. Sarah Bell also of Ribble Valley was second and Jayne Taylor of Wigan Harriers in third.

Jamie Parkinson (Thames Hare and Hounds) won this popular half marathon in 67:15. Sam Stead of Keswick AC was second in 68:32 and in third Tom Charlton (Tyne Bridge Harriers) 69:25.

Jen Elkins (Southampton AC) took the victory in the women’s race with a big personal best of 34:50 ahead of Rebecca Lord (Stubbington Green Runners) who clocked 36:24.

Completing the podium was Sarah Kingston (Southampton AC) with 36:42.

Following the GAA Miler meet, Eilidh Doyle continued her indoor campaign and clocked 53.00 over 400m in a mixed race in the FPSG National Open at the Emirates Arena in Glasgow.

This weekend also saw the Northern Athletics indoors meeting take place at Sheffield. In the 800m final, Liverpool Harrier Jamie Webb cruised to victory with 1:55.55 whilst his club mate John Ashcroft won the 1500m with 3:51.20 and Lee Thompson (City of Sheffield) ran a quick 47:38 to win the 400m final.