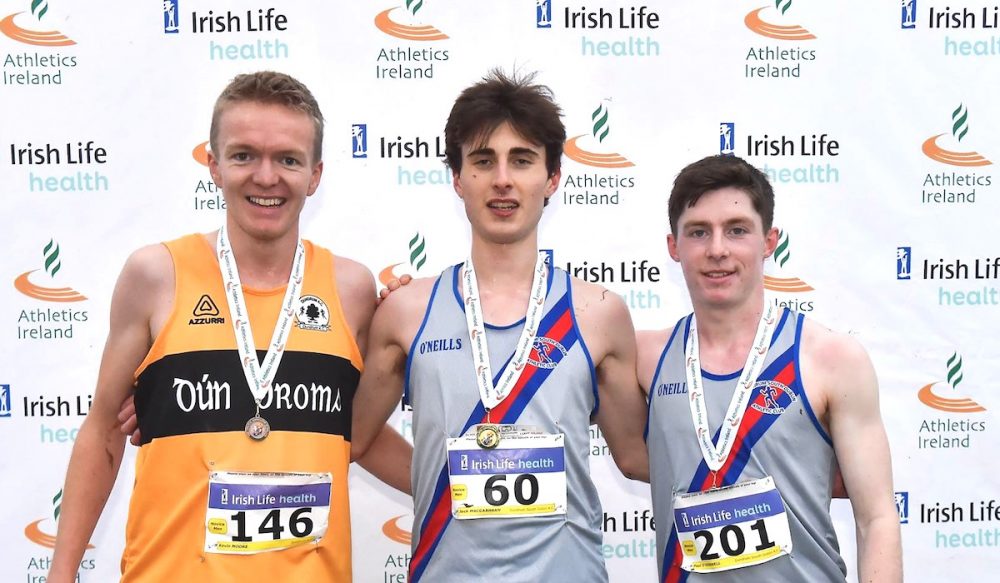 Dundrum South Dublin’s Jack MacGabhann and Nakita Burke of Letterkenny were the winners of the men and women’s titles at the Irish National Novice Cross Country Championships on Sunday (December 17).

In the women’s 4000m race at the WIT Sports Arena in Waterford, Burke held off the challenge of Midleton’s Sinead Kevany and Lauren Dermody from Castlecomer AC, with just eight seconds separating the three. Sportsworld AC, led home by Kate Kelly in eighth place, packed well to finish best of the teams. Leevale AC was second and Crusaders AC third.

In a day of close finishes, MacGabhann sprinted home just three seconds clear of his club-mate Paul O’Donnell in a thrilling end to the men’s 6000m. Kevin Moore of Tipperary club Dundrum AC was just one second behind again. DSD finished best of the teams, beating North Belfast Harriers and Leevale AC.

In the intercounty championships, Cork won the women’s title by two points from Kilkenny with Clare third and Dublin fourth. Dublin did better in the men’s race beating Cork for the title, with Donegal a distant third.

Jamie Battle of Mullingar Harriers was an impressive winner of the boys’ U19 6000m ahead of Clonliffe’s Efern Gidey second and Donal Farren of Letterkenny AC. Clonliffe took the team title with Ennis TC and Finn Valley second and third. Dublin took the county tittle from Donegal, with only two counties represented.

Blackrock’s junior international athlete Sarah Healy continued her winning streak by taking the girls’ Under 17 title ahead of Holly Brennan from Meath club Cilles AC and Lucy O’Keeffe of Youghal AC. Mullingar Harriers proved best of the teams with Dublin the winning county.

Winning the boys U17 race was Conall McClean of St Malachy’s AC in Belfast. Shane Coffey from Naas AC was second, while in third place, Shay McEvoy was leading Kilkenny City

Harriers to a narrow one point team victory over St Malachy’s, with Clonliffe a point behind again for third. Dublin were comfortable winners of the county title. Results can be found here.

At the North West Cross Country hosted by City of Derry at the Gransha Grounds, Neil Johnston of Springwell AC won the men’s race in 18 mins 39 secs. Declan Reed of the host club was second and first M45 in 18:46, with Chris McGuinness of Foyle Valley finishing third.

North Down dominated the women’s race with Rachel Gibson first in 21:42 followed by Katie Moore and Sarah Lindsay. After the postponement of last weekend’s Mighty Oaks cross country, this was the fourth round in the Northern Ireland Cross Country League.

On the roads, Clonliffe’s David Flynn was the winner in 14 mins 57 secs at the Drogheda and District Christmas 5km. Second in 15:11 was Valdas Dopolkas of Balbriggan and District, with steeplechase specialist Tomas Cotter of Dunleer AC third in 15:45.

First woman was Catherina McKiernan of Annalee AC in 17:33; Mary Leech of the host club Drogheda and District was second in 18:37. Full result can be found here.

Sister Joan Healy proved the class of the women’s field over 60m winning her race in 7.44 secs. She also proved fastest in the women’s 150m with a time of 17.73 secs.

Stephen Gaffney of Rathfarnham WSAF clocked 6.99 secs for the fastest time of the day in the men’s 60m. Gaffney also won his 300m race in 35.05 secs.

In the men’s 150m, Cathal Locke of Dooneen AC pipped DSD’s mark Kavanagh to win the first of ten races in 16.51 secs, with Kavanagh clocking 16.52 secs. The only other athlete to break 17 seconds was Jack Dempsey who won the third race in 16.88 secs.

Sonia O’Sullivan was a special guest at the NIA Live meet in Abbotstown on Thursday, December 14 where she ran the mile. Winning the 200m in 24.14 secs was Timmy Bada of Tallaght AC. Leevale’s Conor O’Driscoll won the first 800m race of the night in 1 min 59.58 secs. Ciara Cummin of Nenagh Olympic won the second 800m.