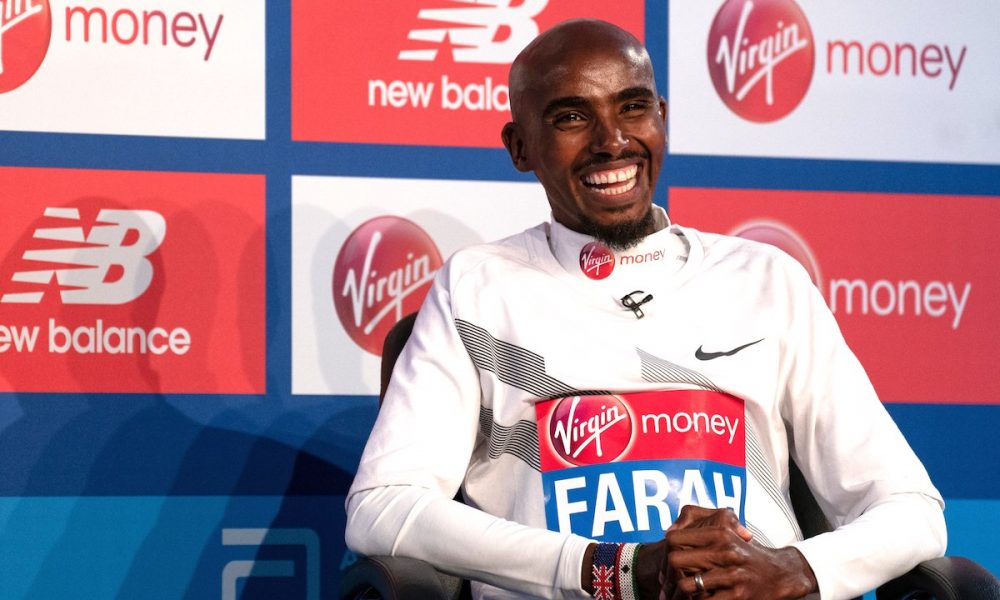 The multiple Olympic and world gold medalist will challenge the world’s best marathoners and a long-standing record in London.

Farah, who had just landed back in the UK from his altitude training base in Ethiopia, made his intentions clear that Steve Jones long-standing British record of 2:07:13 from 1985 is not safe this weekend.

The British record holder over multiple distances on the track will be on the start-line on Sunday with marathon royalty Eliud Kipchoge, Kenenisa Bekele and defending champion Daniel Wanjiru.

Farah himself is a marathon novice, having competed only once over the distance back in 2014 where he ran 2:08:21. However, he is confident he has grown as an athlete from the one who raced in London four years ago.

“Since 2014 to now I’ve learned a lot more and understand a lot more,” said the 35-year-old. “I guess the aim is just one step at a time, go out set a British record, see what I can do and then see what happens.

“I’ve definitely prepared differently this year compared to 2014. When I ran the marathon in 2014 I had to think about saving energy for the track but this year I’ve gone hard at it.”

Since leaving Alberto Salazar and the track behind, Farah has teamed up with Gary Lough, the husband of women’s marathon record holder Paula Radcliffe, and says he has learnt a lot from his new coach.

“Gary and I work really well together. I’m not going to give away anything massive, but he’s given me things to do that I’ve never done before; Gary’s the genius,” he said. “He’s given me shorter recovery runs – say 30 to 45 seconds – so more intensity.

“When I prepared for the London Marathon in 2014, I did so knowing I wanted to continue running on the track, so I didn’t want to lose my speed. But this year has been very different, I have been running more than 120 miles some weeks and have built a good base.

“It was difficult at times to put in the miles, but I have enjoyed the training too. I get up in the morning and really look forward to it.”

One thing that is different ahead of Sunday, compared to the vast majority of his career, is Farah is not the pre-race favourite.

Farah, with his debut 2:08, joins a field on Sunday that includes eight men who have run under 2:06, and he is only the 13th fastest all of those confirmed to race. However, he is unfazed by his opponents, and last month got the better of London’s 2017 champion Wanjiru to win the inaugural Big Half in the UK capital.

“I’m ranked 27th in the world and I’m just going to stick to my plan,” he said. “If the guys set off at world-record pace, I’ll go with them – why not?

“I will give it 110 percent, but a lot of things can happen in a marathon and things change quickly, so you never know what will happen. A win would be amazing but I go to every race to fight and try to get onto the podium. It’s going to be an incredible race.”