Kia Race ambassador McCormack is focusing on her own shoes 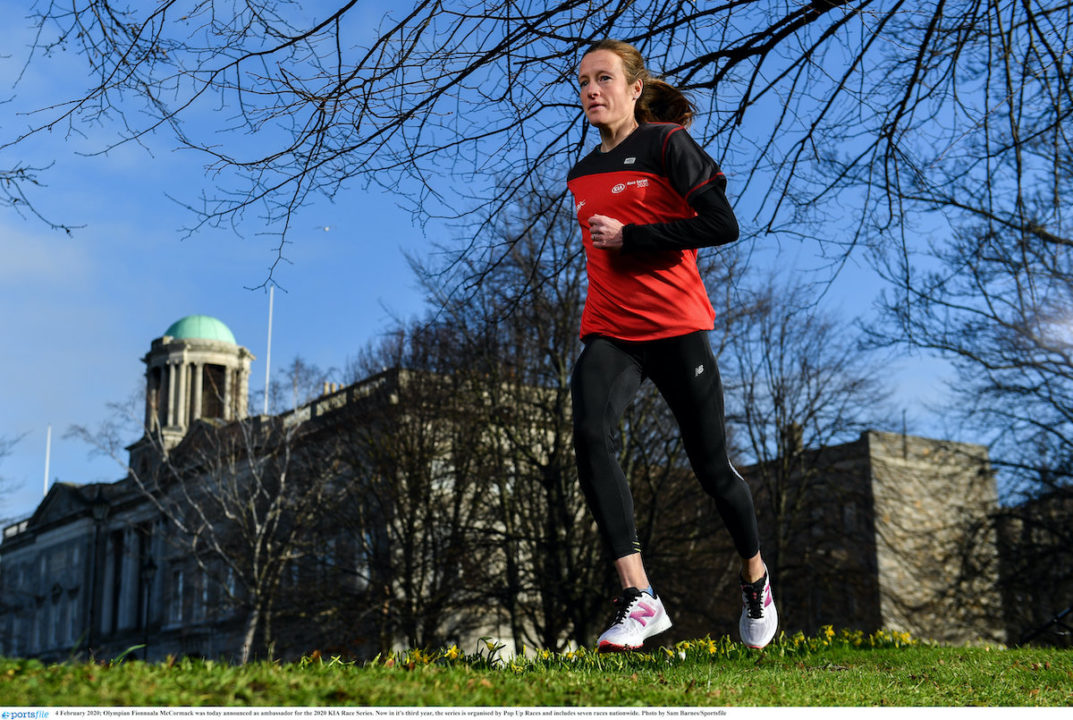 Olympian Fionnuala McCormack was today announced as ambassador for the Kia Race Series 2020.

Now in its third year, the series is organised by Ireland’s leading event race management company, Pop Up Races, and includes seven races nationwide. To register for any of the races just click here.

At a round table discussion today at the King’s Inns, Dublin, the three-time European medalist and second fastest Irish marathoner ever spoke about the physiological impact of having a child on her running and weighed in on recent shoe technology debates.

The jury is still out as there are a few other hopefuls with spring marathons on the cards and as far as McCormack is concerned, she isn’t going to Tokyo until the teams are picked and announced in May.

Her most recent marathon was a sizeable personal best, but McCormack was slow to attribute her improvements to the physiological effects of having a baby, as some have mentioned.

“It is something that is hard to measure, you’re not going to have a very big group to measure it off and how do you put it down to that. Do you run better because you’ve had a year off, because you’re distracted, because you’re a year older and you’ve got a year more training in you. I don’t know. You can’t really isolate it I suppose.”

Anyone who follows her career will know that she is a championship runner first and foremost. “I’d had a, probably a few not ideal years, and most of my marathons were championship marathons, they weren’t really about time.”

“So [Chicago] was probably the first time that I went into a marathon in good shape and looking to run a decent time.”

Some might say times are more controversial than ever with the sudden leap in shoe technology by one company, that has left athletes sponsored by other companies at a significant disadvantage.

“That frustrates me a little bit sometimes about the sport. I love cross country and part of it I suppose is because of the lack of times and it’s more about the competition, and I’ve always been about championships and championships have never been about times.” If you look closely you can see some subtle Kia product placement in this picture. Photo by Sam Barnes/Sportsfile

World Athletics letting down the athletes

“The whole thing disappoints me really. I am not a fan of the shoes. It feels like World Athletics have let us down in the last week. I think they were weak and it makes me sad.”

“To me that’s not what the sport is about. I feel like I’m the only one that really feels like that. No athletes seem to feel the way I do.”

It might feel that way, but there are certainly plenty of people wholly against this technology, but they definitely seem to be in the minority. “I suppose there is the shoe and then there is Nike. I’m sponsored by New Balance so I wouldn’t be wearing a Nike shoe anyway.”

Joining the arms war in the shoe industry

New Balance does have a plated shoe but she has not worn it. “I’ve always been a minimalist I suppose, that’s just always what I have been comfortable in and it’s what I’m used to.”

While for most it is a Nike versus the rest of the world fight at the moment, the Irish cross country star would be against any type of shoe development by any company that gives an unfair advantage or assistance. “I don’t really feel that your shoes should be giving you an advantage.”

Would the Irish marathoner feel at a disadvantage lining up in Sapporo without the shoe?

“No, other people had the shoe in the last Olympics…and it’s the same I suppose as standing on the start line knowing that there’s people that are drug cheats beside you, you don’t look at them and you don’t think about it, you run your own race and you run the best you can.”

It is no longer just one brand making controversial shoes, but many trying to catch up on the carbon plate benefits, if not as effectively as the original run boosters. Will the sudden rule change and heavy patenting by some brands make it difficult for others to catch up?

“I think they were a bit soft on the rule, it definitely seems to be playing up to the one brand, its set as, we have this and now everyone else can play catch up if they want. It doesn’t look fair to me.”

The three time Olympian also posed a very interesting question about self comparison. “How do I compare myself with myself after this. Do I have a PB before and after, do I run a PB and believe it’s me?”

Do we need to have our normal PBs and our Carbon Fibre PBs? An asterisk against the assisted marks or, as was the case at the Raheny 5 recently, just an asterisk for those not running in the special shoes, as Fionnuala McCormack (and Paul O’Donnell) seemed the only elite not sporting them.

It is the third year for the series and  McCormack reminds us that “The Kia race series has driven the standard forward of distance running in Ireland by offering an incentive for elite and top-level national athletes to race against each other.”

This year, there is a prize pot of €10,000 on offer in the Kia Race Series. There is a €1,500 cash guaranteed prize for the overall male and female series winner, with €7,000 for course record bonuses on offer. If the course record is not broken, that bonus rolls over into the overall prize pot.

Athletes must compete in four out of seven races, with the lowest combined points scores over those four races winning the series.

If you’re intersted in signing up to any of the events below then register here.