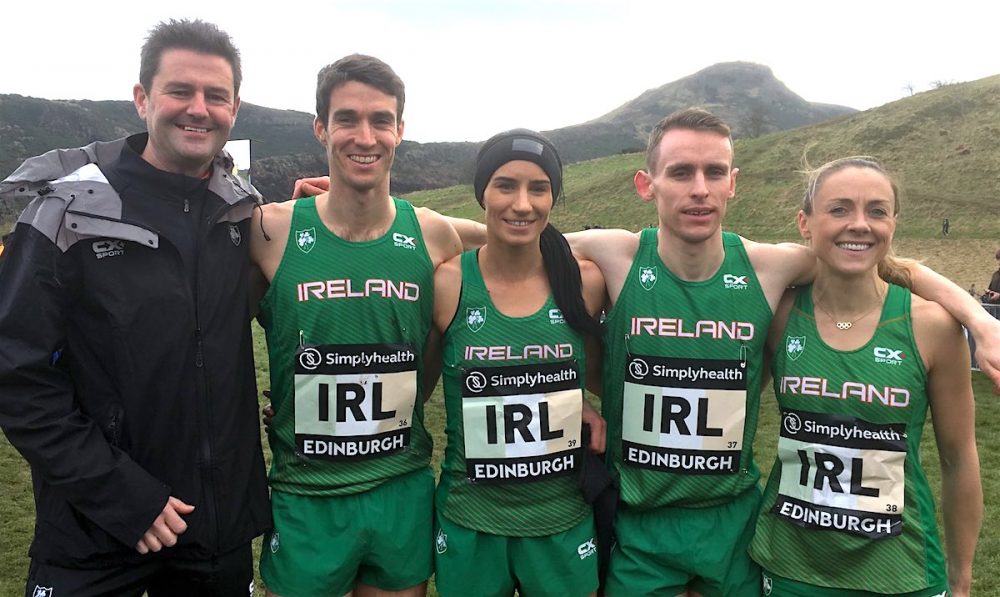 Kerry O Flaherty anchored the Irish quartet to strong fourth-place finish in the 4x1km relay at the Great Edinburgh XCountry on Saturday (January 13).

O’Flaherty, who was not included in the Northern Irish team for Commonwealth Games, was determined to bounce back positively with a good display in Holyrood Park.

Eoin Everard ran an impressive first leg closing the early Belgium lead, and by the exchange to Laura Crowe was neck and neck with Europe and the Belgian team. Crowe of An Riocht looked comfortable and led intermittently in the second of four legs, before relinquishing the baton to Kieran Kelly.

In the penultimate leg, the strength of the British and all Spanish European team showed and Raheny Shamrock’s Kelly handed off to Olympian O’Flaherty in fourth place of eight teams. Newcastle AC’s O’Flaherty gave it everything she had and cemented fourth place for Ireland three seconds ahead of the two chasing Scottish teams featuring Jake Wightman and Steph Twell, as well as the English and American quartets.

Laura Muir showed her class to pull away from the European and Belgian challenge early in the final leg before sealing a seven-second win and retaining the Stewart Cup.

Next up for Ireland in Edinburgh was Fionnuala McCormack in the blue of Europe competing in the senior women’s race. McCormack finished second last year in the Scottish capital but was not at her best this time around and finished in 11th place in a time of 21:42 over the 6km course.

The race was won by European teammate Yasmin Can of Turkey in 20:58 with Britain’s Emelia Gorecka second and USA’s Molly Seidel third.

Representing Europe, West Muskerry AC’s Stephanie Cotter finished 21st in the U20 women’s race. The 18-year-old Irish athlete, who finished a fantastic third last week at the Antrim International, crossed the line in 16:16. The race was won comfortably by American Kelsey Chmiel in 14:10.

Additional coverage and race reports from the Edinburgh XCountry can be found here.