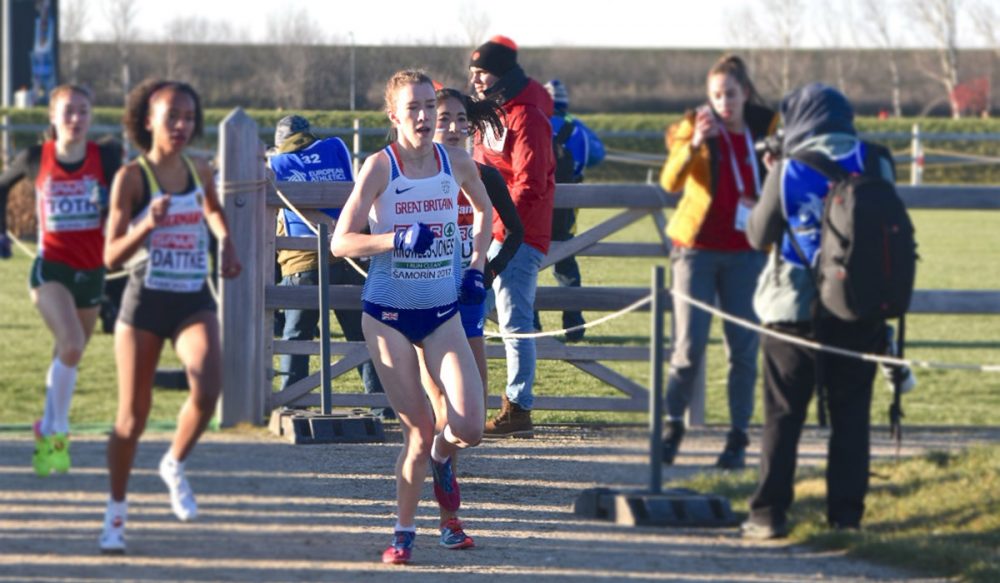 Knowles-Jones, who won silver in 2015 and bronze in 2016 was determined to better that result this year. The Warrington athlete ran a smart race, sitting behind eventual bronze medallist Miriam Dattke of Germany for the first couple of laps before using her strength to take the lead over the 4.1 km course.

Crossing the line to clinch gold in her final year as a junior Knowles-Jones was clearly elated.

“I’ve completed the set so I can’t ask for any more. My mum was crying as I crossed the line, and I was almost crying, it’s an amazing feeling,” said Knowles-Jones winning the junior gold. “I was chuffed for her to see it; she comes out to pretty much every race.

“It’s been such a mad season, and I have been really nervous about this as it’s my last chance to get that gold as a junior so I can’t believe I did it. It means so much to me and it’s brilliant for the whole team to win the team gold too. It just makes for the perfect day.”

After silver in 2015 and bronze in 2016, it's gold for @KJHarriet in the U20 race at the SPAR European Cross Country Championships! pic.twitter.com/NeRANPYDaJ

Norwegian teenage star Jakob Ingebrigtsen was the clear winner in the junior men’s race. The defending champion clinched the win with a strong kick to pull away from Ramazan Barbaros of Turkey and Louis Gilavert of France in Bronze.

Bronze for Jess Judd and team gold for under-23 women

From the off in the U23 women’s race, it was clear the winner was going to be one of German duo Alina Reh and 1500m specialist Konstanze Klosterhalfen. Jess Judd battled hard attempting to close the gap, but the early lead by the German athletes was just too much and Judd found herself out on her own for most of the race in third. In the latter stages, Rae overcame her compatriot to take the win. Klosterhalfen was second with Judd 20 seconds behind clinching the bronze.

“It was a lonely race out there, I was alone from the start and I wanted to catch the girls ahead but despite closing on every lap I couldn’t quite get to them,” commented Judd afterwards. “But I held on for third which was my main aim towards the end. I was thinking about my training in my head and tried hard not to spurt and use all of my energy and I stuck to my plan.”

The Chelmsford athlete’s battling performance was matched by teammates Amy-Eloise Neale in fourth and Amy Griffiths in fifth who with Judd sealed the second team gold of the day for the British women.

With 2016’s silver and bronze medallist still eligible for the men’s U23 this year, it was always likely to be a hard task getting amongst the medals for the British athletes.

Earlier in the race, last year’s silver medallist Yemaneberhan Crippa of Italy laid down the gauntlet, pushing the pace at the front, but he could not shake the French duo of Jimmy Grassier and Hugo Hay. In the closing stages, the French pair overtook the Italian and finished in a fine French 1-2 separated by only two seconds. Crippa held on to his bronze position until the line.

Mahamed Mahamed finished a brilliant 5th overall in Liverpool at the Euro Trials and there were high expectations on the Southampton athlete’s shoulders heading into the under-23 championships. Mahamed just missed the top 10 over the 8.1km course, placing 12th. His performance, along with Chris Olley 13th and Patrick Dever 16th clinched the team bronze medal for Britain. The team’s remaining athlete’s Joe Steward finished 25th, Jack Rowe 31st and Dan Jarvis 42nd.