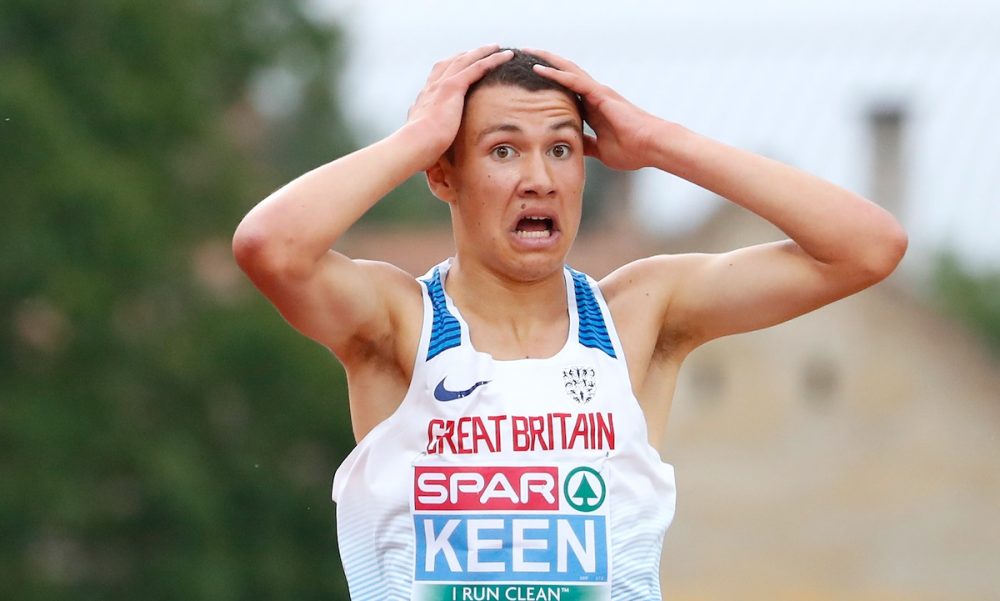 Distance gold on the first day in Gyor for young Cambridge & Coleridge runner.

There was a remarkable gold medal for Great Britain’s Thomas Keen in the boys 3000m on the opening day (July 5) of the European U18 Championships in Gyor, Hungary.

Keen produced a phenomenal display including a sub 60 second last lap to hold off the threat of Omer Amactan of Turkey and Ryan Oosting of the Netherlands to win in style.

The Briton – the European U18 leader going into this event – was always in contention, even when the two Turkish athletes made a move with 1km to go. It proved to be pivotal for a great deal of the field who could not contain the injection of pace. But the same couldn’t be said for Keen who embraced the change of pace and took it on.

With one lap to go, he made his move, hitting the front and taking a commanding lead, which resulted in European gold.

Thomas Keen opened the British medal tally at the European U18 Championships in Gyor with a sub-60 second last lap to win the 3000m title! pic.twitter.com/MSmo4OsqnB

He said afterwards: “All that training has paid off. My coach Mark (Vile) has done a great job to make sure I was in the perfect condition for this race and it feels so good to win.

“The Turkish athletes kicked with a kilometre to go and it was very quick. But I stuck with my plan until one lap to go. Then I thought, ‘if I die, I die’. I knew I was going to go for it as this opportunity wouldn’t come around again. So, I gave everything and it worked. I had planned to make the first move but they did that before me so I just stayed with them and stayed patient. I had another kick and just held on.

“I was starting to swim down the home straight. I mean, I had nothing left. I kept looking behind me, something my coach always tells me not to do. But I couldn’t resist, I wanted to see where they were. When I crossed the line, it was all relief.” He added: “Winning Europeans is amazing but I’ll be competing at English Schools next week – I’ll have to get straight back on it. Then I’ll have a holiday, maybe.”

Rory Leonard (Morpeth) was ninth in a time of 8:39.45, one of those hit by the rapid change of pace with a third of the race to go.

Swiftly making her way into the girl’s 800m final was Keely Hodgkinson (Leigh Harriers). Going in the sixth and final heat, the north-west based athlete had a long wait to take to the track but made the most of her time once she stepped onto it.

Going into the heat as the fastest athlete in the field, she predictably became the frontrunner, and comfortably led the field around to qualify with ease. In fact, she was just pipped on the line to finish second in 2:11.82, but that did not bother the Leigh athlete who completed her task expertly.

Solidly negotiating their heats, Jacques Maurice (Harrogate Harriers) and Kane Elliott (Falkirk) ensured there would be double British representation in the final of the 1500m.

Maurice went in the more tactical affair, biding his time before finishing second in the burn-up. His time of 4:01.97 saw him progress. Elliott was involved in the faster of the heats, finishing outside the automatic spots in seventh. However, his time of 3:56.57 was enough to set him up for a place in the final on Saturday.

Elise Thorner (Wells City Harriers) earned a personal best in the 2000m Steeplechase. 6:50.00 was an improvement by over a second, and she was delighted to face such competition on the European stage to help her to that mark.

She commented post-race: “This is my first proper [2000m steeplechase] race with more than two or three people so I really wanted to prove that I could race against other people. It was hard work as there was a lot of shoving so I had to show my cross-country spirit out there. I just used all my experiences from 800m and 1500m races that I have done over the years. You learn to adapt.

“It was such a great experience though and I’m over the moon to be inside the top five.”

After advancing as the fastest qualifier in the heats this morning, Cassie-Ann Pemberton (Birchfield) did the same in semi-finals, albeit with a wind-assisted time. A +3.1 wind picked up during the last semi-final, Pemberton clocking 11.56, a personal best, albeit with an illegal wind.

Sadly, Amy Hunt narrowly missed out on a berth in the final despite placing 8th overall in the standings. The first heat was quicker, which meant the Charnwood athlete settled for an improvement of 11.83 (+0.7) from this morning’s heat.

Out in the field, Jade Spencer-Smith (Harrow) faced a long pole vault qualification series, but she dealt with it calmly to move into the final. A second-time clearance at 3.80m secured her spot alongside 12 others in Saturday’s medal event.

There was comfortable progression for world U18 leader in the high jump, Dominic Ogbechie (Highgate Harriers), to the final of that event. The 16-year-old has cleared 2.22m indoors already this season, but he only needed 2.04m today to earn a place in his first international final.

The 16-year-old added: “Overall it was pretty good. I’ve jumped well enough to reach the final. Some parts were a bit scruffy but I know what I need to iron out for the final. Hopefully the big heights will come in that final.”

The action continues at 9:05am UK time with the boys 110m heats.