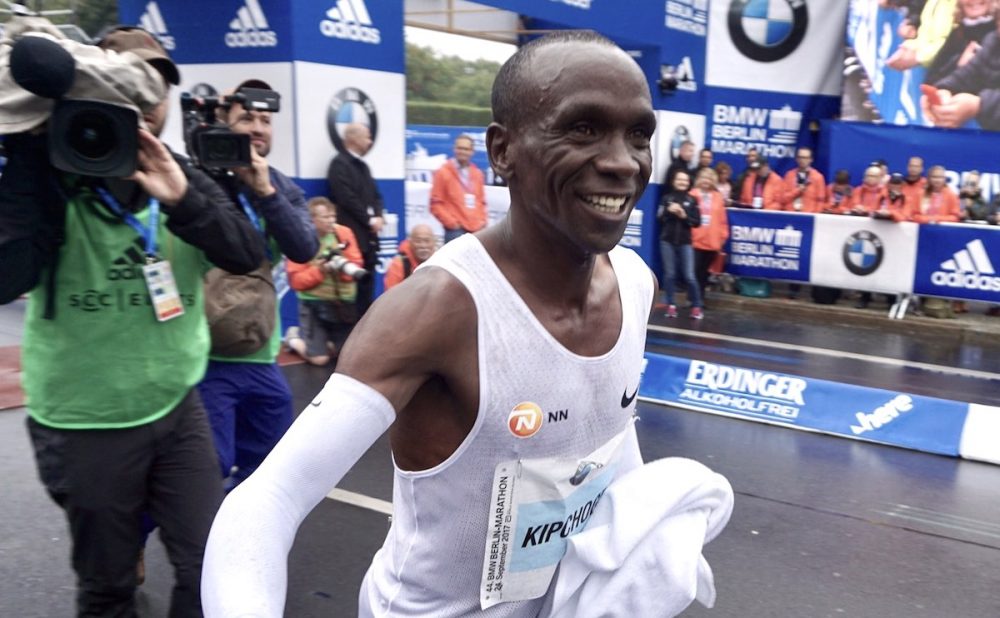 The marathon legend aims to break his 2:03:05 personal best in the German capital.

The 45th edition of the marathon major takes place on Sunday, September 16 and Kipchoge, who won his third London Marathon title in April, has stated he intends to break his personal best when he returns to defend his title.

“My preparation is entirely concentrated on the BMW Berlin Marathon on September 16,” said the Kenyan star. “I am confident I can beat my personal best on this fast course if conditions are good.”

Given that he is the Olympic champion and acknowledged to be the number one for the distance in recent years, this suggests the 33-year-old Kenyan is ready to produce something special. His best is currently 2:03:05, set in winning the 2016 London Marathon. This was eight seconds slower than the world record which remains in the possession of his compatriot Dennis Kimetto (2:02:57), when winning the 2014 race in Berlin.

Kipchoge’s mental as well as physical prowess has suggested for some time that the world record is within his reach. A strong contender will also be the former world record holder in the marathon Kipsang. Now 36, the Kenyan set his world record time of 2:03:23 in 2013 in Berlin.

Kipchoge and Kipsang lined up last year in Berlin with the target of breaking 2:03 as a key objective but such hopes were dashed by steady rain throughout. Kipchoge won in difficult conditions in 2:03:32 while Kipsang dropped out.

Another to be taken into consideration is Zersenay Tadese of Eritrea, five times a winner of the world half marathon title as well as the world record holder for the distance.

Kipchoge has a strong claim to be the greatest marathon runner of all time. He is the reigning Olympic champion, having won the title in Rio in 2016, three times a winner in London (2015, 16 and 18), twice winner of the Berlin Marathon title as well as winner of the Chicago Marathon in 2014. He finished runner-up in Berlin in 2013 when Kipsang broke the world record. He broke into new territory in May last year when running 2:00:25 for the marathon distance, achieved on the Formula One circuit of Monza in Italy though substitute pacemakers made the time ineligible as a record.

Kipsang’s best marathon time is not his world record from 2013 but ten seconds faster: 2:03:13 which he ran three years later in Berlin which left him runner-up behind Kenenisa Bekele of Ethiopia, whose time of 2:03:03 was only six seconds outside Kimetto’s world record.

Tadese of Eritrea is the oldest of the trio at 36 and, though highly experienced over the distance events in general, has the least experience of the three in the marathon. No-one has gone close to his world record of 58:23 for the half marathon, set in Lisbon in 2010.

The super-fast Berlin Marathon course has been the stage for ten world records – three by women, seven by men. Since 2003 all six world marathon records were run in Berlin including the current top time of 2:02:57 by Dennis Kimetto. In 2001 Japan’s Naoko Takahashi became the first woman to break 2:20 when the Olympic Marathon Champion from the previous year ran 2:19:43.