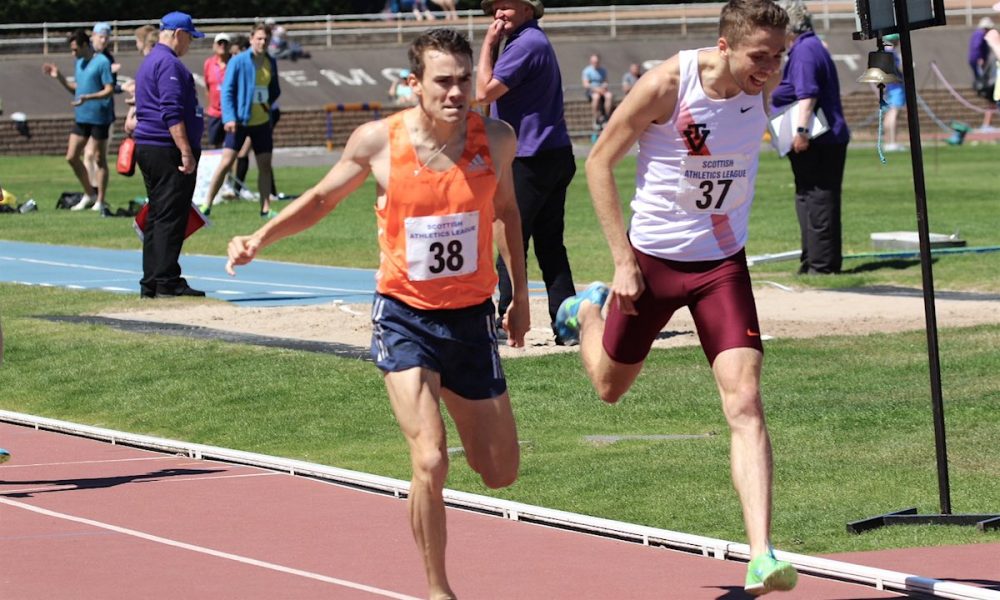 The reigning champion hopes for another all Scottish podium in the men’s 1500m at the British Championships this weekend.

Chris O’Hare says he would “love to see another 1-2-3 for Scots” at the British Championships as the nation’s best descend on Birmingham for two days (June 30 – July 1) of track and field action and battle for places on the European Championships team.

Edinburgh AC trio O’Hare, Josh Kerr and Jake Wightman claimed all the medals at the Alexander Stadium last year and were duly selected for the London 2017 World Championships.

Fellow Scot Neil Gourley was fourth – and only lost out by two hundredths to O’Hare in a specially-arranged 800m ‘warm-up’ at Grangemouth on Sunday.

“I’m ready now to go again next week and the good thing is I am definitely in much better shape than I was in Australia for the Commonwealths,” he says. “It is going to be very exciting, that is for sure, and I’d love to see another 1-2-3 for Scots – or even a 1-2-3-4 like last year.”

English Olympian Charlie Da’Vall Grice is in better form than a year ago, however, and O’Hare for his part is looking to seal a Berlin slot to help bound back from eighth place at Gold Coast 2018 1500m final, where Wightman took bronze.

“Charlie is in better form than a year ago, though, so that’s a big danger and there will be others,” he explains. “You just don’t know how it can pan out but I suppose the good thing is it prepares those selected for Berlin itself.”

O’Hare clocked 1.48.35 on Sunday at Grangemouth with Gourley at 1.48.37 with two of the quickest 800m times by Scots in in Scotland for a number of years.

“It was a good race and a good test,” says the 27 year-old, who closed a gap in the final 100m for a season Best run. “I had to work really hard to get back at Neil and I wanted it as competitive as that – because that’s the ideal preparation for next week. The time isn’t significant but it was decent on the day because it was pretty windy on the back straight in particular.”

Meanwhile, Olympian Frank Clement has outlined his admiration for this generation over 1500m by insisting they are the best for four decades.

“There’s no doubt at all it is a great era for our men in the 1500m,” says Clement, who was fourth in the 1978 Commonwealths and in the Olympics over 1500m. “To have four or five guys so high in the British rankings reflects well on them as individuals and on the sport.

“Josh Kerr has shown great form in America in the past couple of years, Jake Wightman’s double bid at the Commonwealths was very good and Chris O’Hare proved in Oslo a couple of weeks ago he is ready to bounce back again.

“All of them are under 3.36 for this year already and people maybe have to appreciate that’s pretty fast. It could be that one of them will have to post 3.33 or 3.34 to top the Scottish rankings for 2018 – it will be fascinating to watch that later this year, never mind what happens in terms of the selection for GB for the Euros in Berlin.

“I look at what they are doing and feel they are all pushing each other on and getting competitive.

“I hope is that they don’t get scared or anxious about racing each other. I think head-to-head meetings will bring the best out of them. It became very rare for Seb Coe and Steve Ovett to race each other and that was a pity.”

Action from the guest race at Grangemouth on Sunday (June 24) where Chris O’Hare competed in his first race in Scotland for more than three years ahead of this weekend British Championships in Birmingham.