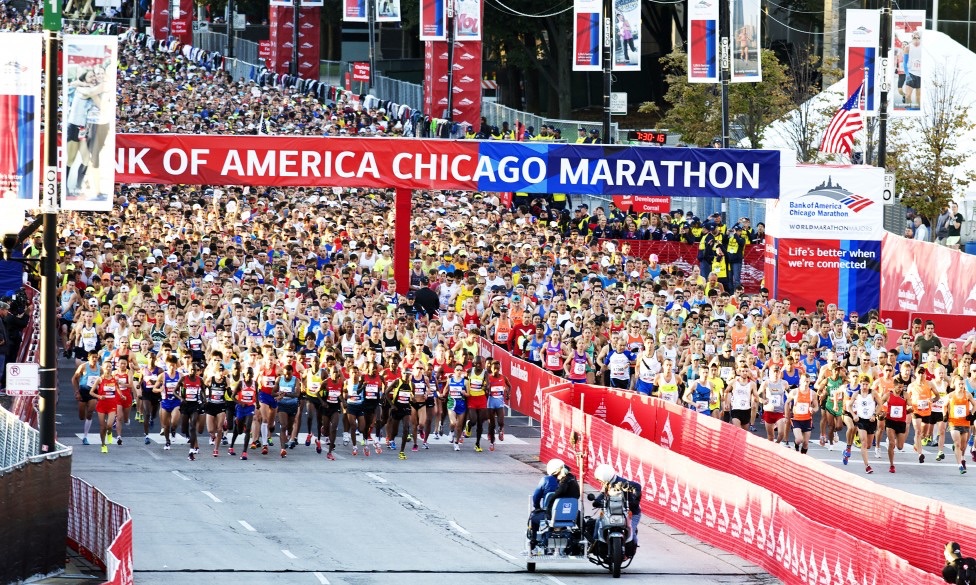 Kenyan duo Abel Kirui and Florence Kiplagat aim to retain their titles on Sunday, but both are well aware it won’t be straightforward at the 40th edition of the Chicago Marathon.

Kimetto holds the Chicago course record posting 2:03:45 in 2013. This is the first time the Kenyan star has been back to the windy city in four years, and in during that time, he broke the world record, running 2:02:57 in 2014 at the Berlin Marathon.

Last year Kirui won in 2:11:23 and it’s expected a faster time will be needed if he is to retain his title.

Galen Rupp, America’s best distance runner of his generation aims to be in the mix and has his sights on breaking his 2:09:58.

“I definitely think I am in shape to run a fast time in Chicago,” Rupp said in an interview with Fast Running. “The other marathons I have run have all been fairly tactical and slow, at least in the first half of them, so I definitely think there is a lot of room for me to run faster than I have in the past.”

In the full interview with the double Olympic medalist, he chats about targets for Chicago, training and Mo Farah. It can be found here.

Despite Kiplagat being the two-time defending champion, the Kenyan is not the favourite in the women’s marathon race. Ethiopia’s Tirunesh Dibaba, the 5,000m world record holder and the third fastest female marathoner in history is expected to deliver a winning performance in her first appearance in Chicago.

“I’m ready for Chicago and I hope to improve my personal best, that’s my first goal and then to win,” Dibaba said to Fast Running. “I have been training for two months now after the World Championships to prepare for Chicago, and God willing I can run faster than I did in London.”

The full interview with the 3-time Olympic track gold medalist, including her thoughts on Paula Radcliffe’s world record, can be found here.

Also hoping impress in Chicago are outcome are American Jordan Hasay, Kenya’s Valentine Kipketer and Australian Lisa Weightman. Hasay is making her second marathon appearance and has her sights improving on her personal best. In her marathon debut in Boston earlier this year the 26-year-old posted 2:23:00 for third, the fastest marathon debut by an American and moved her up to fifth on the US all-time list of women marathoners.

Britain’s Sammi Kinghorn makes her marathon debut in the wheelchair race and aims to achieve the Commonwealth Games standard, while, in the men’s race fellow Briton Simon Lawson features.

How to watch the Chicago Marathon
American broadcaster NBC has full broadcasting right around the world. Thankfully though they have allowed unrestricted online viewing access around the world online.

USA: In the US you can watch on NBC Sports Network, NBC 5 Chicago and the online steam can be found here.

Worldwide, including the UK and Ireland: NBC’s online stream can be found here.