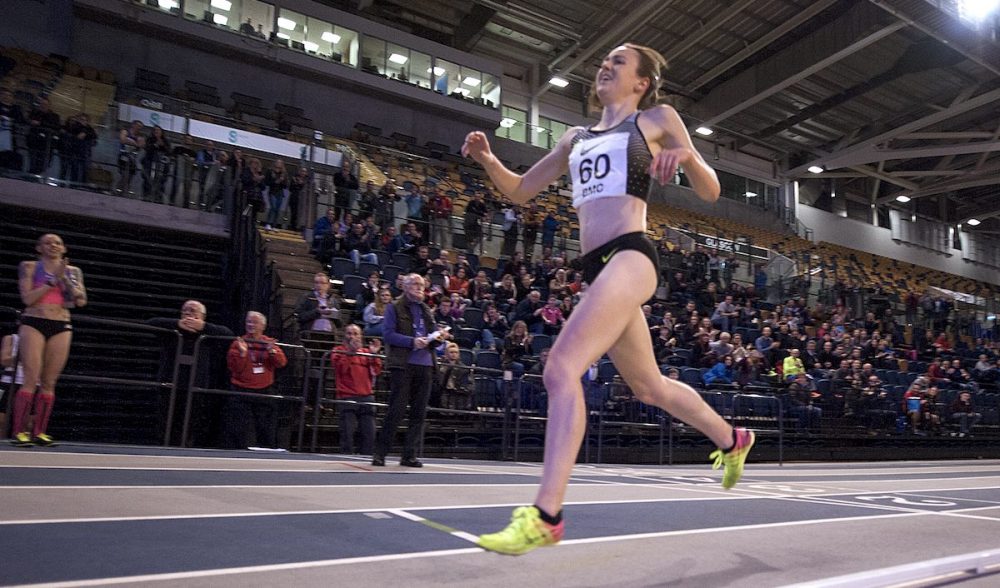 Laura Muir, Hannah England and Andrew Heyes open their indoor seasons at the GAA Miler Meet in Glasgow and the BMC Indoor GP in Sheffield respectively, while Josh Griffiths and Rebecca Robinson get set for the rearranged Telford 10k.

Laura Muir leads the entries for the Scottish 3000m Championships in Glasgow on Sunday for an eagerly-awaited GAA Miler Meet.

Muir, who won double gold at the European Indoors last year, begins her indoor season ahead of the World Indoors in Birmingham in March. The European champion, set this event alight last year with a superb run in the 5000m when her time of 14.49.12 broke the British Record for indoors, previously held by Liz McColgan.

“I’m really looking forward to another GAA Miler Meet event at the Emirates as I love to race in Scotland when I can,” said Muir. “It is the first of two, of course, with the Great Edinburgh XC at Holyrood Park the following week when I am involved in the 4 x 1K International Relay.

“Sunday should be a really good afternoon of athletics at the Emirates so hopefully people can come along and support the athletes and their coaches.”

The women’s 3000m race features Katie Snowden and Melissa Courtney who will chase the 8:50 qualifying time for selection for the World Indoors in Birmingham. The race will be paced by Charlene Thomas.

Among the start-lists for the other races are Kelsey Stewart and Jill Cherry (600m), Erin Wallace and Josephine Moultrie (3000m); and masters clashes will see the likes of husband-and-wife team Fiona and Grant Matheson in action.

The men’s 800m is lead by Liverpool Harrier Jamie Webb with a best of 1:46 in a field that consists six athletes who have run under 1:50 including BUCS 800m champion Jonny Monk.

The rescheduled Telford 10k takes place this week and the course is renowned for fast times. The popular road race is normally in early December, but following a heavy spell of snow, organisers postponed it to the beginning of January 2018.

Eighteen men broke the 30-minute barrier in 2016 with Aldershot Farnham and District athlete Josh Grace taking the win in 29:21, in front of Tom Lancashire who ran 29:22 (Bolton Harriers) and Jake Shelley of Shaftesbury Barnet in third with 29:23.

This weekend sees another great line up including; Swansea Harrier and World Championship marathoner Josh Griffiths, Kevin Seaward, who was announced in the Northern Ireland Commonwealth Games squad this week and his Cardiff AAC teammate Matt Clowes.

Dan Studley of Bristol and West along with a host of the country’s top runners who will descend on Telford, hoping to be rewarded with quick times.

Elsewhere, across England club athletes are heading to their County Cross Country Championships on Saturday. The best of the counties will have aspirations of becoming County Champs and representing at the Inter-Counties on Saturday 10th March 2018 at Prestwold Hall, Loughborough.

Norfolk County XC have been holding group training sessions for all clubs in the build-up to the Champs with new Senior XC team managers Chris Merrylees and Dom Blake taking the progressive step to improve the County Team going forward.