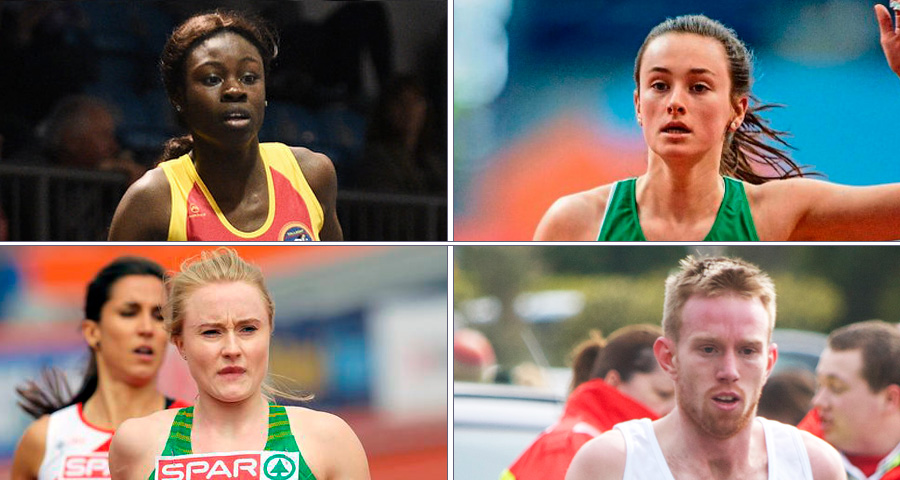 Rhasidat Adeleke of Tallaght AC, aged just 15, proved the star in Athlone. Adeleke, who took silver European Youth Olympic Festival in Hungary last summer, blazed around the track in 23.80 secs to rewrite both the national junior and youth record books.

Also in fine form was Ciara Neville of Emerald AC in Limerick whose time of 7.34 seconds in the junior women’s 60m was agonisingly close to the World Indoors qualifying mark of 7.30 secs – a time Neville ran last year when equalling the Irish indoor best.

Multi-eventer Kate O’Connor of St Gerard’s Dundalk, who will compete for Northern Ireland at the Commonwealth Games next April, was a busy woman over the weekend.

After winning the shot in Jordanstown a day earlier, she won the junior long jump in Athlone with a final round leap of 5.79. Second was Ruby Millett of St Abban’s with 5.64m, another all-rounder.

McTeggart, the only competitor in this competition, also recorded a height of 1.70m in the high jump, while Morland, the reigning national senior and junior champion, won the U23 60m hurdles in 8.50 secs. Molly Scott of St Abban’s, who had finished second in the 60m behind Neville, took the junior title in 8.54 secs.

Class of the field in the U23 men’s 60m hurdles was Matt Behan of Crusaders, whose time of 7.97 secs was a personal best.

Dooneen’s Cathal Locke was an impressive winner of the junior men’s 400m in a time of 48.22. Winning the U23 title was Brandon Arrey of Blarney/Inniscarra in 48.43. Ciara Deely of Kilkenny City Harriers won the junior women’s 400m in 55.14 secs with Miriam Daly of Carrick-on-Suir second in 56.77.

James Kelly proved the class of the field in the junior men’s 6km shot, with 16.58m. Older brother John won the U23 title heaving the 7.23k shot out to 16.44. A final jump of 13.37 won Sean Thompson of Lucan Harriers the junior triple jump title.

Last year’s junior champion Michaela Walsh of Swinford, moved up an age to the U23 age group winning with a heave of 14.94m.

In England, multiple time Irish champion Amy Foster of City of Lisburn showed a welcome return to form, with a personal best and World Indoor qualifying time of 7.30 secs at the London Indoor Games in Lee Valley.

This times equals the Irish record set by Anna Boyle in 2007 and equalled by Ciara Neville last year. Foster, whose previous best was 7.32 secs, was left disappointed early this month after not gaining selection for the Northern Irish team for the Commonwealth Games.

“The last 3 months were a nervous waiting game. The last 3 weeks I have been in a state of disbelief and devastation,” Foster wrote on Instagram. “Today I ran faster indoors than I ever have done before. Someone up there is looking after me.”

John Travers showed when leading home a record 3,516 finishers at the Raheny 5-Mile in Dublin on Sunday, January 29.

Travers’ time of 23 mins 38 secs saw him finish comfortably clear of home favourite Mick Clohisey who finished in 23:50. Also, home in under 24 minutes was William Maunsell of Clonmel in 23:56.

The first woman was Ann-Marie McGlynn of Letterkenny AC who finished in 26 mins 44 secs. Leevale’s Michele Finn was second in 27: 29 – just ahead of Catherina Mullen of Metro St Brigid’s who finished in 27:34.