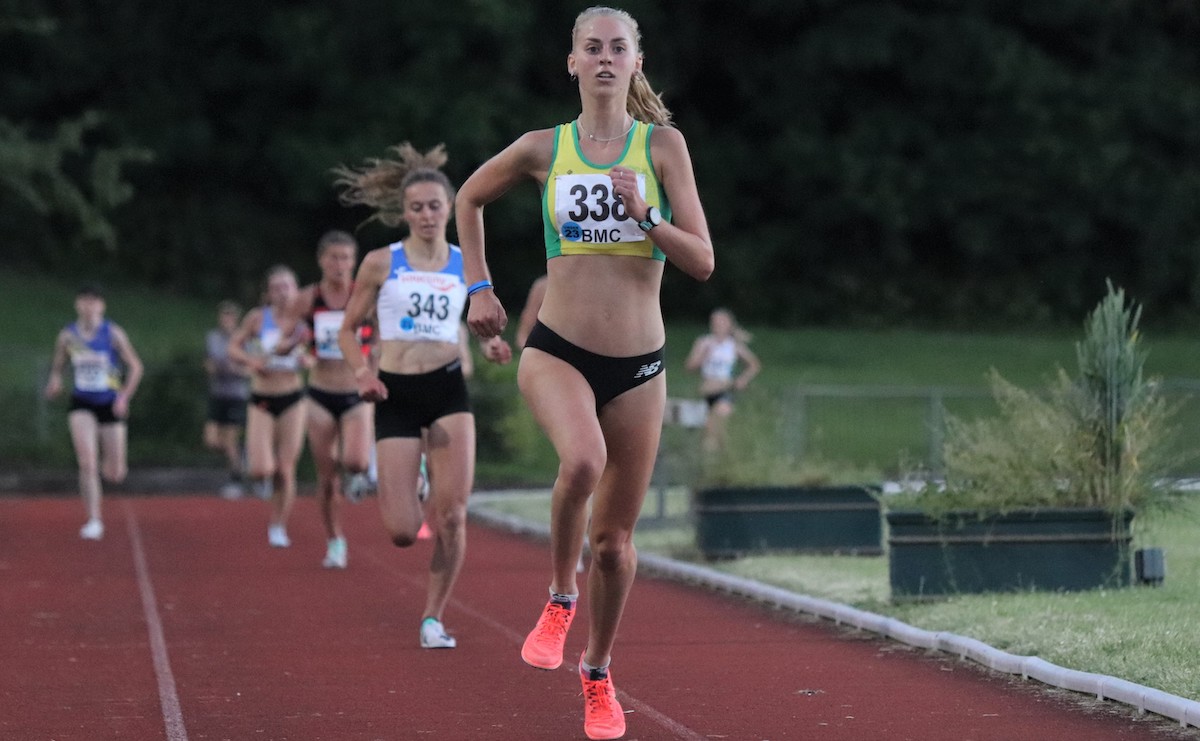 Charlotte Dannatt at the Watford BMC GP a fortnight ago. Photo: James Rhodes

The inaugural Leeds Midsummer 10,000m Classic promises fast times and exciting racing. So much so that you wonder why Mo Farah didn’t sign up there instead?

Whilst 10,000m-watching eyes this week may be focused on Mo Farah as he targets his fourth Olympics within a dedicated race at the British Championships on Friday, just 24 hours earlier a host of fine club athletes will take to the track for a night of 10,000m racing hosted by Leeds City AC at the inaugural Leeds Midsummer 10,000m Classic.

The races will be streamed live on YouTube with commentary from Matt Long, and to whet your appetite allow me to run you through those expected to compete.

The women’s race incorporates a real mix on the experience scale, with eight of the 17-person field making their track 10,000m debut.

There is no standout favourite for the race, which starts at 20:35, although based on performances this year Charlotte Dannatt goes in as the fastest over 25 laps.

The U23 athlete made her debut the distance in the States in April with 34:02.99, the third fastest by an U23 this year. She has also improved her 5000m PB to 16:06.70 at the Watford BMC GP a fortnight ago, but agonisingly is less than two seconds shy of the European U23 Championship qualifier. However, the Camberley athlete is due to race over 12.5 laps at the British Championships just one day later.

By contrast, Claire Duck is no stranger to racing 25 laps with six under her belt. Thursday will be a ‘home’ race for the Leeds City athlete who set her 32:51.38 PB at the 2017 edition of the Night of the 10,000m PBs when finishing fifth.

Abbie Donnelly, who has twice represented Great Britain at the European Cross Country Championships, will be racing on the track for the first time since September 2019 following a 16:37 5k last month. Two of the field raced at the Müller British Athletics 10,000m Championships three weeks ago in Birmingham; AFD’s Sally Ratcliffe (34:39.68 debut), who has taken huge chunks off her 5k PBs on both the road and track, and Elizabeth Renondeau (37:10.61 debut).

As I mentioned at the start, for almost half of the field the race will represent their 10,000m debut. These include two athletes who ran well to record PBs at the Cheshire Elite Marathon – Anna Bracegirdle (2:42.25) and Rebecca Gallop (2:46.06). They will be joined by Claire Martin, Ruth Jones, Rachel Friend, Michelle Schaub, Nicola Devine and Grace Copeland who, according to Power of 10, has never raced above 3000m on the track.

The field is completed by Keri Pearson in her first race of 2021, home athlete Leila Armoush, Hannah Brown (who has set PBs in all four of her races in 2021) and Leeds City’s Heather Townsend, who I cannot find on Power of 10 or Tilastopaja to bring you any information on. Thursday’s action will end with the Men’s A Race kicking off at 21:20, with 25 athletes on the start list.

One athlete in the field having a fine 2021 is Fast 10’s Nigel Martin. The Sale Harrier made his marathon debut at the British Olympic Marathon Trials in Kew Gardens in March with 2:18.09, and took over 25 seconds off his 10,000m PB at the Müller British Athletics 10,000m Championships less than three weeks ago.

Also in the field is Scotsman Max Milarvie who will be full of confidence after taking the win in the C race at Birmingham three weeks ago in his debut at the distance with 29:22.91, a time that puts him 18th on the UK rankings for the year. Max has also run over 5000m consistently at the three BMC Grand Prix held this season, including a 14:10.91 PB at Sportcity, a track where just two days later Olympic places will be decided.

Davies continues to get better with age

An interesting name on the start list is Welshman Andrew Davies. The Stockport athlete is best known for his exploits on the roads and mountains. Afterall, his CV includes holding the marathon V40 British Record (2:14:36), a total of 23 marathons, including at the 2017 World Championships and two Commonwealth Games.

However, this will be the Stockport athlete’s first track race in nine years and his debut over 10,000m. Following a seventh-place finish at the British Olympic Marathon Trials in March and two 5ks this month just a shade outside his PB, it could be a good return to the track!

Iraitz Arrospide will also be making his 10,000m debut, having represented Spain at last year’s World Half Marathon Championships and the 2018 European Championships for the marathon. He is also reigning IAU World 50km Champion (2:47:42).

Other debutants over the distance on the track include Lewis Gamble Thompson, Callum Davidson (following a 14:09.81 PB over 5000m at the BMC last month), Chris Perry, Alistair Rutherford, Ronny Wilson, Samuel Moakes and Matthew Bowser (in his first track race since 2018), whilst – according to Power of 10 – Andy Norman will be racing 25 laps for the first time in 18 years!

Others due to take to 25 laps of the Leeds track include Ross Skelton in his first race of 2021 after a 2020 that included wins at the Isle of Man Marathon, Goodwood Half Marathon and Rye Summer Classic Series 5, and Ollie Lockley, one of last year’s Fast 10 group, will be looking for another good race after his 29:41.40 at in Birmingham earlier this month. Dominic Jones, who dipped under 30 minutes on the road for the first time in April, Marc Brown, Chris Rainsford, Alastair Watson, Richard Allen (in his first track race in two years), Ryan Thompson, Nathan Jones, Paul Graham (less than a fortnight after running a 5000m PB in Watford), and James Straw round out the field.

Farah to take one last swing at 10,000m
65 Athletes nominated for Olympics