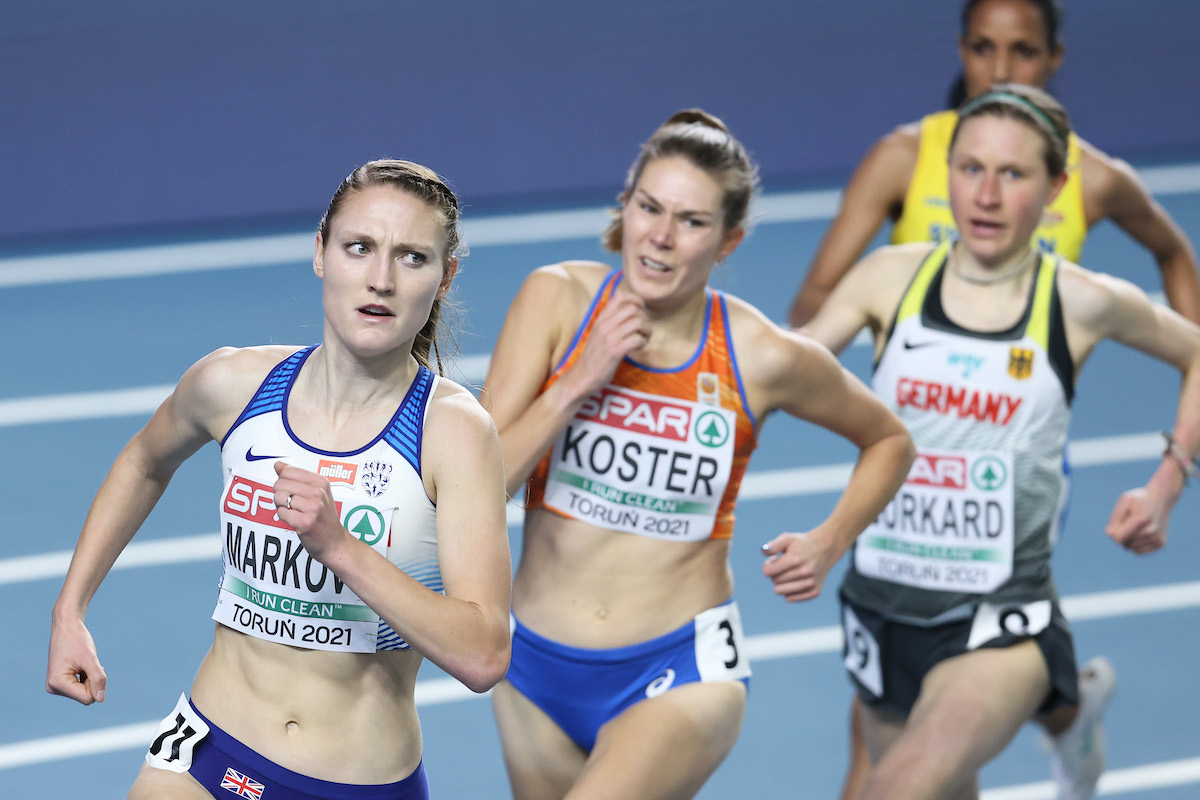 We’ve been so excited by a Champs actually happening, we’re not holding it all back for the Sunday weekend round-up. James Rhodes in on the case.

As James wrote in his preview, this weekend’s European Indoor Championships are the first time a large contingent of the British team are making their senior debut, gaining their first British vest or representing their country for the first time on the track.

You’d never guess it by the maturity of the performances shown by the British athletes in the first two sessions of the four-day event, with 15 of the 17 athletes in action between the 400m and 3000m progressing from the heats. Want to know what’s been happening?

Then this round-up is for you!

Yesterday’s opening night action saw a series of heats on the track and in the field, with the 3000m women taking centre stage from a British perspective.

All three athletes easily progressed through to tonight’s final and could easily feature in the race for the medals. Amy-Eloise Markovc was first across the line in the opening heat in 8:56.26 – her second fastest time over the distance – in a strong field. Post-race she was evidently pleased with her first outing at a senior championships.

Also in Championship debuts, Verity Ockenden and Amelia Quirk lined up in the second heat with Quirk leading from the front in, impressively, her second ever indoor race. Verity ran tactically to finish second in 8:52.60 (less than a second behind her PB set last month), whilst Amelia was rewarded with a PB of 8:53.21 in fourth.

The heat was not without controversy however, with Slovenia’s Maruša Mišmaš-Zrimšek (originally first) and the Netherlands’ Jip Vastenberg (originally third), both potential medalists, disqualified for stepping off the track and on the inside line respectively. Rules are rules, but the idea they gained an advantage from this is one certainly up for debate.

This leaves the Brits as first, third and fourth fastest from the heats going into the final at 20:00 tonight. As Ellie Goulding sings, ‘anything could happen’! Piers Copeland of Great Britain competes in the Men’s 1500 metres during the European Athletics Indoor Championships at Torun Arena on March 04, 2021 in Torun, Poland. (Photo by Alexander Hassenstein/Getty Images for European Athletics)

Whilst I’ve billed the men’s 1500m as a battle between Marcin Lewandowski and Jakob Ingebrigtsen (who both easily qualified from their heats), two of the 12 finalists looking for a place on the podium will be Piers Copeland and Neil Gourley.

Piers ran a smart race in his senior debut, sitting back for the first few laps before moving into third at the bell and finishing second behind Spain’s Ignacio Fontes in 3:38.88. Ireland’s Andrew Coscoran ran 3:39.00 for third and will also line up in tonight’s final as a non-automatic qualifier.

Neil has come to Torun looking for vengeance, having qualified for the final two years ago in Glasgow, but unable to race due to illness. His heat included Jakob Ingebrigtsen, who looked comfortable throughout (even yawning on the start line), but it was Neil who crossed the line first in 3:39.84 with an evident grin. Whether that was for making the final, or for being able to say “I beat Jakob” is for you to decide.

He was delighted with how the race went, saying post-race “I didn’t really put a foot wrong. I would be selling myself short if I said I was just happy to be in the final; I am looking to win a medal tomorrow and we will see if I can back that up tomorrow.  I am confident that my best performances will come in the championships, so I hope that is the case tomorrow.”

Brighton Phoenix’s Archie Davis, another making his British senior debut, finished sixth in a heat won by Marcin Lewandowkski with a 3:41.40 – a hugely positive result for his debut.

The final is the last race of tonight’s session at 20:35.

Good performances continued in this morning’s session by Britain’s middle-distance runners in the heats of the women’s 800m and 1500m.

As I’ve said a few times, these Championships are an opportunity for athletes to compete on the “big” stage for the first time, and the 800m a prime example of this, with Keely Hodgkinson, Issy Boffey and Ellie Baker making their British senior debuts.

Saying they performed well feels like an understatement. Keely, who goes into the competition over a second faster this year than anyone else, comfortably won her heat in 2:05.63 and was pleased with how things went; “I felt good from the start, the pace was good and I managed to save as much energy as I could. The job is done and I’m looking forward to the semi-finals. I have faith in my training and my strength to get through the rounds. I need to make sure I stick to the plan and try not to make any mistakes.”

Issy was the fastest of the three Brits, coming second in her heat behind Elena Bello of Italy in 2.04.08, whilst Ellie ran well to win her heat in 2:06.15. Norway’s Hedda Hynne – who I predicted would feature in the final – finished fourth behind Ellie and did not progress.

Ireland’s Nadia Power progressed with 2:03.16 to come second in the fifth heat behind Poland’s Anna Wielgosz who ran a PB to finish as fastest in the heats. However, sadly Nadia’s two compatriots (Síofra Cléirigh Büttner and Georgie Hartigan) did not progress.

Following good performances from Piers Copeland and Neil Gourley in the 1500m heats yesterday, the women were not going to be upstaged over the same distance. Holly Archer of Great Britain competes in the Women’s 1500 metres during the first session on Day 1 of European Athletics Indoor Championships at Arena Torun on March 05, 2021 in Torun, Poland. (Photo by Alexander Hassenstein/Getty Images for European Athletics)

Holly Archer set an outright PB of 4:09.77in winning the first heat, pushing the pace with three laps to go after a slow first kilometre (2:54). It was Holly’s first race in a British vest and her first time running sub-4:10. To say she was happy would be an understatement, telling the BBC post-race interview “I looked at the start list and thought this is a tough heat … for them!”. I am really excited to see how she goes in the final.

She will be joined by Herne Hill’s Katie Snowden, who led for much of the third heat, notably faster than the preceding two as athletes looked to secure one of three non-automatic qualifying spots. Making her senior British debut Katie’s tactics of leading out worked as she secured one of those fastest qualifying places with 4:10.70 for third.

Whilst we focus on the endurance races, it would be remiss of me to not quickly mention some other highlight performances.

Whilst only 16th fastest in the heats, Femke Bol is the standout favourite for the gold medal after running four (!) Dutch National Records this season, with her 50.48 PB the fastest European indoors since Nicola Sanders in 2007.

I’ll end with my love for the combined events, where Holly Mills has made an excellent start in the first three events of the pentathlon. It’s her senior debut and has made good progress with a 8.22 60m hurdles (0.01 off her PB), 1.74m high jump (1cm shy of her PB) and a 13.22m SP, her fifth best ever. I can’t wait to see how she goes in the long jump and 800m tonight, especially after running a solo 2:12.07 in Manchester last month to qualify for the Champs.

We’ll continue to bring updates throughout the weekend as the action continues.