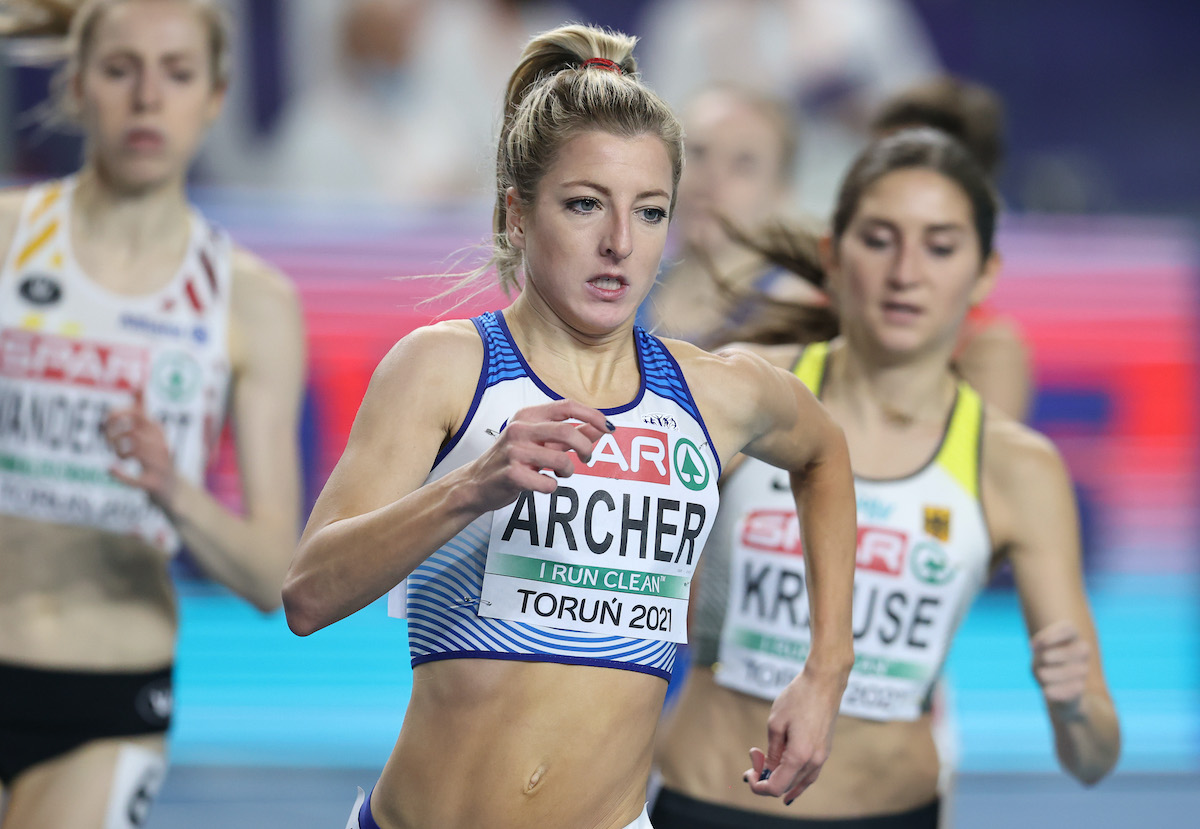 Catch up on yesterday’s European Indoor Championship action from Torun, Poland with another James Rhodes report.

It is strange to think we are over two thirds of the way through the European Indoor Championships. It feels like it only started yesterday – which is not far off true – yet so much has happened it also feels like it’s been going for weeks. If it was the Great North Run, we’d have turned onto the seafront in South Shields, with the final stretch to come tomorrow.

Saturday saw plenty of action, drama and upsets. I’ll take you on a whistle stop tour of what happened. Buckle up, it will be a bumpy ride. Or at least will be if you are a female 1500m runner.

In my original preview I said I was genuinely excited for the women’s 800m. After the heats and the semi finals, that sentiment has not changed. For the first time in European Indoors history, Great Britain will have three women in the 800m final. Not only that, it is a debut senior Champs for Keely Hodgkinson, Issy Boffey and Ellie Baker, and they all look right at home.

Tonight’s three semi-finals were led out by Keely, literally, who led the first heat from start to finish for a comfortable and commanding win. It wasn’t just the win that was impressive but the manner in which she did it. Of the three races, hers was the slowest through 600m, (1:34.42), but Keely ran the final lap in an astonishing 28.69, to be the fastest from the three races with 2:03.11.

Issy was next to go in a field including home favourite Joanna Jozwik. Issy stayed out of trouble towards the back of the field for the first three quarters of the race, before making a decisive (and brave) move at the bell to take a jump on the other five athletes. Her bravery was rewarded with a second place finish behind Jozwik and a place in the final. Two down, one to go..

Next up, Ellie. Could she make it that half of the final would be British? Of course she could. Sitting comfortably off the shoulder of Spain’s Daniela Garcia, not panicking when the field bunched around her around halfway before breaking on the final lap, coming second behind Angelika Cichocka. She was clearly delighted in her post-race interview with the BBC, moreso when told she’d be joined by Keely and Issy.

The women’s 1500m final was wide open; I struggled to call a winner beforehand, and was none the wiser after the heats. Holly Archer and Katie Snowden both looked good in their heats, but then so did about 7 other athletes. Would someone lead it out from the start and go for a time, or would it be a more sedate affair?

Well, neither. It was one of the most ridiculous races I’ve seen, resembling a game of bumper cars on Brighton Pier more than a track final. Elbows, pushes, barging. Based on the DQ-happy officials to date, a lap didn’t pass without a “that could be a DQ moment”.

It started at a pedestrian pace – 2:30.84 through 800m – with Spain’s Ester Guerrero making a break for it before running out of stream in the home straight (she was leading at 1400m, but finished fifth). Belgium’s Elise Vanderelst capitalised to take the title in 4:18.44.

Holly had sat towards the middle and back of the very tight pack for much of the race, but had a strong finish to come home second with Hanna Klein of Germany taking the bronze. However, there  had been moments in the race where Holly appeared to try and fill two or three gaps that didn’t exist, and there was reluctance to celebrate too early, both online and, it seemed, by Holly herself. It was as if she knew.

Sure enough, 15 minutes later, her disqualification was announced, as was that of Spain’s Agueda Munoz. A very sad situation. The GB camp submitted an appeal, but the coverage didn’t seem necessarily in her favour, and a distraught Holly’s Instagram Stories made for incredibly hard viewing.

Fast forward 45 minutes or so – good news! Holly was reinstated and confirmed as silver medallist. Given the extent of pushing and shoving elsewhere in the race (and reinstatements elsewhere – notably the men’s 1500m), it feels the right decision. At the time of writing there’s a counter-appeal under consideration, but I can’t see another change, would be more flip flops in one evening than in my wardrobe. Jamie Webb continued his impressive return from injury with a second-place finish in the 800m semi-finals, clocking an impressive 1:45.99, one of the fastest indoor runs of his career. He was surprised by the pace, telling the BBC it felt like he was in a 60m race for the first lap but that he is very much looking to upgrade his silver from Glasgow two years ago.

The pace was set by Andreas Kramer of Sweden, but Poland’s Mateusz Borkowski made a move at the bell and was rewarded with a PB crossing the line first, with Kramer third.

Borkowski was subsequently disqualified for pushing Kramer (who’d then advance to the final), but was later reinstated after an appeal. Sound familiar?

Spare a thought for Spain’s Mariano Garcia, who is entertaining for the motorcycle impressions he brings to his pre-race introductions and post-race celebrations. He went out like a man on a mission in the first heat, going through 400m in 53.58, over a second ahead of the rest of the field. Unfortunately his motorcycle ran out of petrol in the last 100m and he was overtaken just before the line by Amel Tuka and Patryk Dobek.

I omitted Dobek from my pre-compeition preview, but Mark Hookway touted him as one to watch. He was right, with the Pole – best known as a 400m hurdler – qualifying for the final in a race that is precisely one month after his first ever 800m race. Crazy!

Pierre Amboise Bosse and Adam Kszczot complete the line up in Sunday’s final.

Earlier in the Day

The morning session predominantly incorporated a somewhat ridiculous number of men’s 60m heats, alongside both 60m hurdle heats (as some who know me might expect, it would be remiss for me to not mention Nadine Visser’s 7.92 to go into tomorrow’s semis and final as the fastest in the field).

However, it also saw the heats of the men’s 3000m, with Jack Rowe, Andrew Butchart and Phil Sesemann going for Great Britain.

Andrew and Jack both safely qualified for the final, and I was particularly impressed by Jack’s performance. He led the field from 1500m, holding on for third position, an automatic qualifying spot and his second fastest time (7:55.67).

“It felt good. It went exactly how I wanted it to go,” said the Scot. “The floor felt pretty smooth and my legs should be pretty fresh for tomorrow. The main thing is to be as fresh as I can for the final and hopefully I can come back tomorrow and get the win.

“When we went out quick, I knew some people would struggle with it, so I tried to keep clear. When it’s like that, you can look around a bit and enjoy the moment, so that was nice. I want to bring home a medal. The shinier, the better.”

Phil Sesemann ran well to finish fifth in a loaded heat, behind reigning Champion Jakob Ingebrigtsen, Jimmy Gressier, Isaac Kimeli and Mike Foppen. Given his focus has been on marathon training, and he viewed the British Indoor Championships as potentially his last, I’d say it was a bloody good showing.

Poor Mike Foppen, though. He went out at a crazy pace, at one point about 75m ahead of the field, but clearly struggled in the last kilometre before being swallowed on the home straight and not making the final.

As always, I’ll end with some notable performances in the non-middle distance events. Jodie Williams took a brilliant bronze in the 400m from lane 1. Not only that, she did so with a 51.73 PB to go eighth on the British all-time list. A captain-worthy performance from the British Team Captain.

The race was won by Dutchwoman Femke Bol, who set her fifth 400m National Record of the year (50.63), still the fastest European over the distance in 14 years.

Holly Bradshaw also added a bronze to her European Indoors collection (2013 Gold, 2019 Silver) in the polevault, with a 4.65m best clearance.