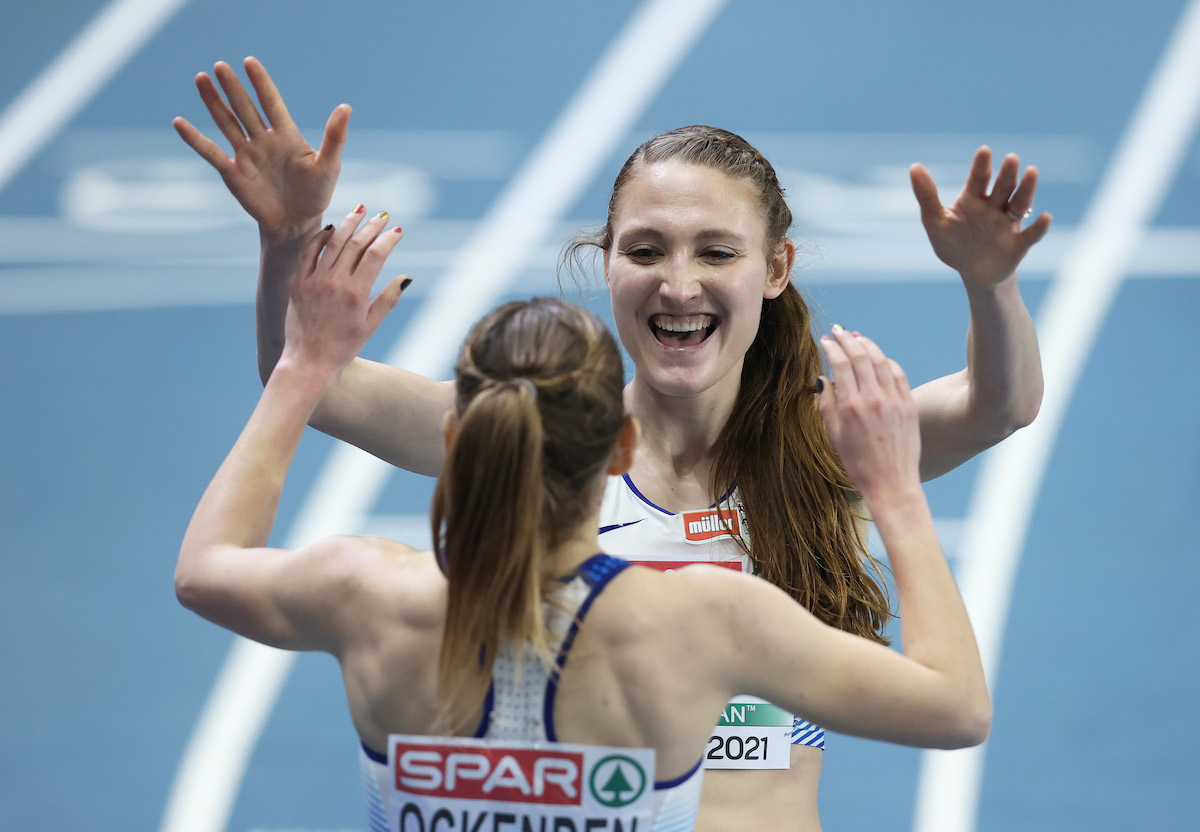 James Rhodes continues in his coverage of the Torun European Indoor Championships after an exciting evening. in Poland.

This afternoon in writing about yesterday’s 3000m heats, I said the following: This leaves the Brits as first, third and fourth fastest from the heats going into the final at 20:00 tonight. As Ellie Goulding sings, ‘anything could happen’!

Turns out I was right; anything could happen, and everything did happen. Verity Ockenden, Amy-Eloise Markovc and Amelia Quirk went in as first, third and fourth fastest respectively, and they did not disappoint.

Israel’s Selamawit Bayoulgn led out the field for the first half, at one point the on-screen pace calculator predicting a 8:38 finish. Continuing a pattern of frontrunning she was closely followed by Amelia, still in only her third ever race indoors, with a relatively bunched field behind including Verity and Amy-Eloise.

Unfortunately Maureen Koster tripped with less than 400m to go, almost taking Mehaf Bahta down with her, which allowed Verity, Amy-Eloise, Amelia, France’s Alice Finot and Selamawit to gain a gap – five Brits in the top five with less than two laps to go!

Down to the final lap

At the bell it was down to Verity, Amy-Eloise and Alice. Even at 100m to go it was impossible to predict the order of the podium. It had me off the sofa and on my feet, I can imagine what I’d have been doing had I been in the stands in Torun as once planned.

Amy-Eloise took the win in 8:46.43 – an eight second PB – with a fast finishing Alice taking silver and Verity just behind for bronze in 8:46.60, a five second PB. Just 17 one hundredths of a second separating the podium. Amazing.

Amelia held on for an impressive fifth, again a PB, with 8:48.82. I can’t really comprehend running that speed in your third go indoors. It’s superb.

The race, and the podium, was the greatest demonstration as to why you should send full teams, even if the ‘big’ names don’t choose to participate, and more importantly never write an athlete off, always give them a chance. Three athletes making their senior debut, all in the top five and two coming home with medals.

Verity, who will be 30 in August, and Amy-Eloise, who ran at the World Juniors ten years ago, are perfect examples of the fact that it is not all about what you do at the start of your career. Fantastic.

I also think not setting a medal target helps to remove a layer of unnecessary pressure, I commend Head Coach Christian Malcolm for that.

Verity was crying on the podium, I wasn’t far off doing the same on my sofa. I’m not sure there’ll be a result this weekend that tops that for me personally. A great performance by Piers Copeland in his first senior championships. (Photo by Alexander Hassenstein/Getty Images for European Athletics)

I billed it as a race of Jakob Ingebrigtsen against Marcin Lewandowski, and that’s exactly what happened, with Jakob leading it out after a couple of laps and never giving up the lead, crossing the line first in 3:38.06. Marcin took second in 3:38.47, swapping their positions from the previous edition in Glasgow in 2019. Spain’s Jesus Gomez took third, matching his medal from Glasgow.

But, drama alert. There was some pushing and shoving mid-race, and Jakob has been disqualified for taking one step off the track. There was no apparent advantage, and a counter-protest was raised by the Norwegians.

[It was a story with a happy ending, for Norway rather than Poland, with the young Norwegian re-instated and given the title. Lewandowski having to settle for second, instead of a fourth successive win – Editor].

Piers Copeland, another athlete making their senior debut, finished in an excellent fifth place with 3:39.99. Guy Goes For It

The heats of the 800m followed the largely expected script, with no surprise results to tell you about. Having no non-automatic qualifiers did add an extra layer to the six races.

Shout out to 18-year old Cian McPhillips of Ireland who took second to progress from the third heat, behind Spain’s Mariano Garcia and his motorcycle celebrations.

Mark Hookway noted after my Champs preview that he’d been impressed by Patryk Dobek’s performances this season, who I’d failed to mention. Better known as a 400m hurdler, the Pole has paced a couple of 800ms on the circuit and looked sharp.

Mark was correct – the Pole won his heat finishing ahead of 2017 World Champion Pierre Ambroise Bosse and Irishman Mark English.

Holly Mills finished a superb fifth in the pentathlon with 4517, her second best and second score over 4,500 in a fortnight. A great performance by the 20 year old in her senior debut. She was clearly thrilled in her post-competition interview, with a brilliant outlook for the summer ahead:

“I feel like if you don’t aim for it [Tokyo] you’re never going to get there, so you might as well aim for it, if you miss it, you miss it”.

Nafi Thiam put in what she called an unexpected performance to set a PB and National Record of 4904 for the gold, a title that has swapped between Katarina Johnson Thompson and Nafi since 2015. She ended with a 2:18.80 800m indoor PB, which she set in 2013. Crazy.

The Belgian’s score puts her seventh on the all-time list, and I cannot wait for the eventual KJT-Nafi indoor battle. Belgrade next year, anyone?

Belgian Noor Vidts and Hungary’s Xenia Krizsan both set PBs for the silver and bronze.

Two more noteworthy British performances before I sign off; Jodie Williams ran a 52.09 PB to qualify for tomorrow’s 400m final, whilst Emily Borthwick set a 1.91m high jump PB to also make the final. Her reaction to her third-attempt clearance was a joy to watch.