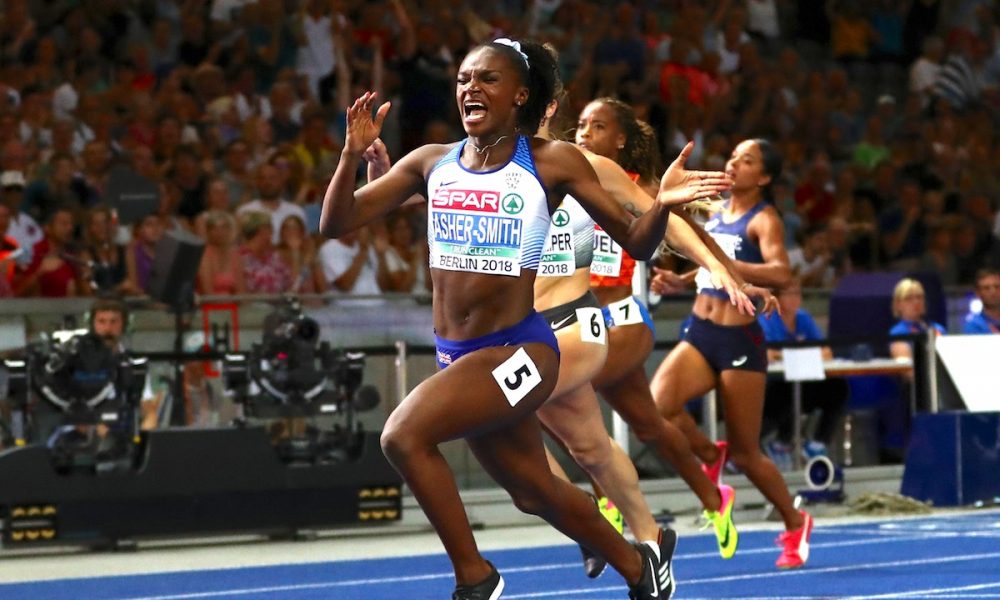 The first British woman to win European 100m gold since Dorothy Hyman’s victory some 56 years ago at 1962’s championships in Belgrade, Asher-Smith lived up to her billing as the favourite in emphatic style with a show-stopping performance.

The signs had been in place from earlier on in the evening as the 22-year-old clocked a world-class 10.93 while easing down in her semi-final, though what was to come was extraordinary nonetheless.

Bolting out of the blocks, Asher-Smith put ground between herself and the rest of the field almost immediately, with the gap only increasing as torsos came upright and heads began to eye the finish line.

Streaking clear, Asher-Smith secured gold with a dip, with the clock flashing 10.85 to reveal yet another revision of her own British record, this time by some seven hundredths of a second following her 10.92 posting earlier this summer in Oslo.

In a 10.85 British record and world leading time, Asher-Smith looked delighted to win the European title. “I went out there and executed my race,” said the speedster. “Sprinters say the word ‘execute’ so often it becomes  boring but I was just so happy that I went out there and ran the race that I knew I was capable of.”

In sixth place was Imani-Lara Lansiquot and the 20 year-old, who has been sharing her journey this year on Fast Running, was very impressive in her first major championships.

“I am very, very happy,” he said. “This is my first time on the senior stage and that is my second fastest time ever. It would have been lovely to have left with a medal and a personal best but I am only 20. I am learning my craft and getting better and better with each race. I am a little bit disappointed now, but I am incredibly proud of myself.

“This time last year I think I had finished my season and run 11.7, now have put together consecutive 11.1s. I’m just very grateful to be in one piece and to be a European finalist, not many people can say that, and to be better than I have ever been before. I have to take that.” Zharnel Hughes led a British 1-2 with Reece Prescod grabbing silver. With both athletes under 10 seconds with 9.95 and 9.96 respectively it was a great night for British sprinting. CJ Ujah was just outside the medals in fourth with 10.06.

Hughes is already looking to the future and said “That’s the high point definitely, it sets me up nicely going in to the world championship, next year, so I just need to focus and continue putting in the work and trust and believe in my team and myself and leave the rest to God.”

Pressed ran a U23 National record with his 9.96 and the future looks bright for the young star. “To be honest I can’t really complain. It was a personal best and the first time dipping under ten seconds legally. I am really happy about that. It was a national under-23 record as well and I am happy to come out and get my first sub ten clocking”

One of many other events with triple British interest, the men’s 10,000m took place in punishingly hot conditions inside the well-populated Olympiastadion. Featuring the experienced Andy Vernon and Chris Thompson alongside Alex Yee, the sweltering conditions made for a tough race from the off.

Led out by Juan Perez (ESP) with the enthusiastic Kaan Kigen Ozbillen (TUR) on his heels, the British trio kept in touch with the lead pack in the early stages, with Yee doing the early lead running of the Brits as the field trotted through 3000m at 8:30 pace.

Halfway was reached with Ozbillen to the fore and always looking to push proceedings on, with the British trio continuing to hang on to the well-established lead pack of thirteen as Vernon began to show his experience and move through, beyond Yee and Thompson, as the latter pair’s legs began to feel the effects of the heat.

Looking strong having recently travelled in from an altitude camp out in St Moritz, Vernon maintained form as he moved into seventh then sixth, as the field came round with two laps to go and the toss-up for medals really began.

Kicking too early, temporary race leader Adel Mechaal (ESP) paid the price as he was overtaken and pushed back to fourth come the finish line, with the conclusion of the race boiling down to a scintillating final 800m in which Frenchman Morhad Amdouni moved out to lane three to power home to gold. Chasing all the way, Vernon finished a brilliant fifth, clocking 29:16.90, with compatriots Thompson and Yee finishing 11th and 14th in 28:33.12 and 28:58.86 respectively.

On his finishing position and the race, Vernon said: “I’m a bit disappointed. It was that last couple of laps, it was just like my legs weren’t quite wanting to give me it, they were ‘numb’ is the way I’d describe them, I just didn’t have that in the last two.

“And it didn’t seem like it was that quick, if I was there I think I could have been amongst it, I just had to be there and I wasn’t. I’m disappointed in myself that I wasn’t. It was just frustrating

“It terms of tactics until the last 800m I nailed it. 10,000m is about running to rhythm and getting to the last 1k or maybe 2k having conserved as much energy as possible.”