Curtain Call for a Terrific Torun 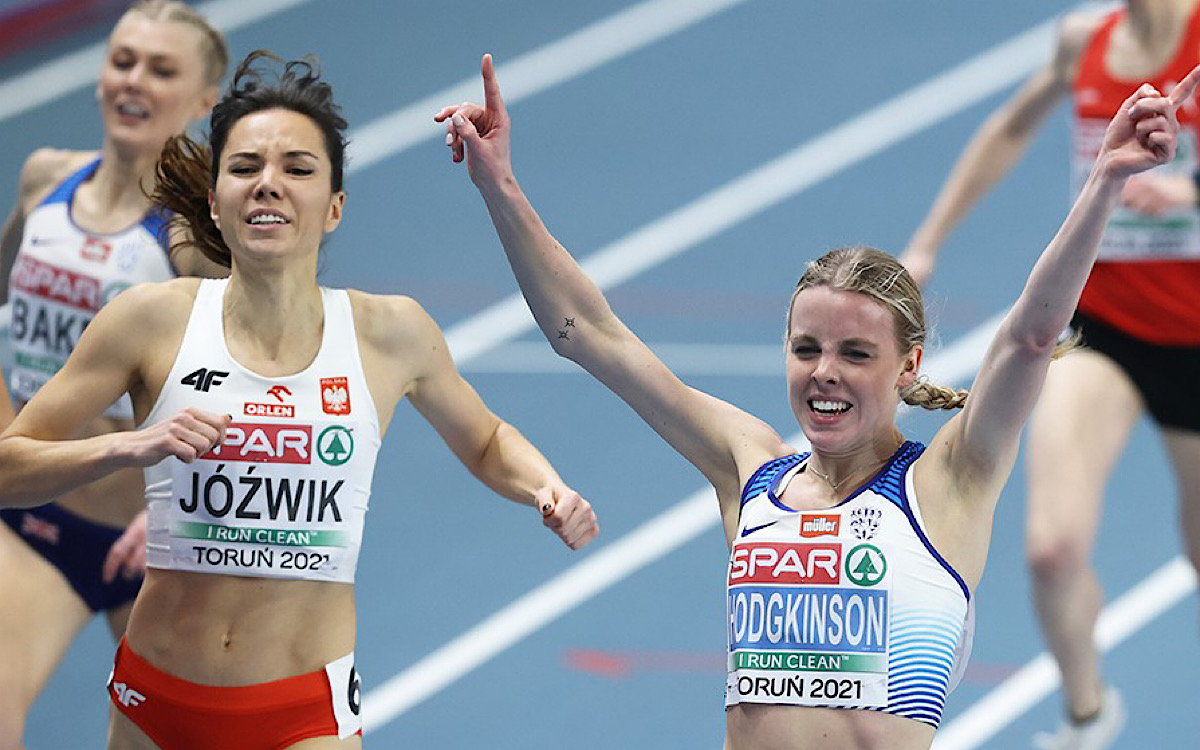 What can I say? For the past four days (as well as those preceding) I have been consumed by the European Indoor Championships in Torun. It has been 515 days since the World Championships in Doha came to a close, and it was a long, but worthwhile, wait.

In a sea of travel restrictions, sanitary protocols, testing procedures, limited on-site media and no spectators, the event somehow managed to go ahead smoothly. It’s a fantastic achievement and I can’t really believe it happened.
The athletes went – in record numbers – to run in Torun, and run they certainly did.

As an all-round athletics fan I’d even suggest they left the best session till last. It had everything, and as I have for the past three days, I’ve put pen to paper (or keys to a Word document) to share my thoughts on what we saw from a middle distance perspective.

The women’s 800m final came with a bit of history – it was the first time in European Indoors history that Britain had three women in the final. They came in the form of Keely Hodgkinson, Issy Boffey and Ellie Baker, all making their senior debuts in a British vest.

All three had impressed in their heats and semi-finals, and there were genuine medal chances on offer.
Thanks to her 1:59:03 now-former World U20 Record, Keely was the fastest on paper, but so many times that counts for little in championship racing, as had been witnessed in other races. Just nineteen years old, you might expect the pressure of going in the favourite to be daunting, especially with two strong Polish stars in Joanna Jozwik and Angelika Cichocka in the field.

Despite their best efforts, the field could not catch her. It wasn’t just a win, it was a dominant and tactical win. There’s not much else to say other than she is a bloody good athlete!

She continues a strong tradition in the event, with previous winners including her mentor Jenny Meadows. She is also the youngest British European Indoor Champion in 51 years. What a statistic!

Webb Went For It

The men’s same over four laps also promised to be a cracker. It could almost be seen as a battle of the young guns against the old guard, with the line up comprising (comparative) veterans of the distance Adam Kszczot, Pierre-Amboise Bosse and Amel Tuka up against Jamie Webb and Poles Mateusz Borkowski and Patryk Dobek.

Jamie, who went in with the fastest time of 2021 and was looking to upgrade his silver medal from two years ago, took it out and led for the first three laps. It was a brave move, particularly after a fast semi-final, but ultimately he could not hold off the charge of the Polish trio, coming home in third for bronze.

It was a race of six athletes, but also a race of three Poles, with all looking good for victory as they approached the home straight. In the end it was Dobek who had the fastest charge for the line, crossing in a PB of 1:46.81, closely followed by Borkowski (1:46.90). Just 0.14 seconds separated the top three. Adam finished fourth. A changing of the guard of sorts.

I omitted Dobek from my preview, which was clearly an oversight! In my defence, five weeks ago he had never run an 800m. Not a bad progression! Again I must mention Mark Hookway, who messaged me after reading my preview to say he was looking forward to seeing how Patryk would won. He’s clearly got an eye for talent, which is no surprise given his success with Tonbridge AC.

Keeping Up With the Ingebrigtsen (or not)

The 3000m men had the potential to deliver fireworks. Jakob Ingebrigtsen was looking to defend his title from Glasgow, but was about to run his fourth race in as many days after taking gold in the 1500m.

Not only that, a number in the field had run quicker this year than his PB. Would they go for it from the start to try and outrun the Norwegian? This seemed the only possible way anyone could claim victory.

As it turned out, no, they would not do this. In fact, they did the complete opposite and the race played straight into Jakob’s hands.

Then, just as one would expect, Ingebrigtsen put the burners on and was gone. There were valiant attempts to catch him by Belgian Isaac Kimeli and Spanish duo Mohamed Katir and Adel Mechaal, but they all fell short, with Kimeli taking the silver and Mechaal bronze.

It was no surprise they failed to catch the 20 year old; he closed in a 2:21 (yes, that’s not a typo) final kilometre, rewarding him with a second PB in two days (7:48.20). That 2:21 would place him eighth over that distance in Europe this year (thanks to Jon Mulkeen for that stat).

He also overtakes his older brother Henrik as the most successful of the Ingebrigtsen trio at the European Indoors with three golds and one silver.

Brits Andrew Butchart and Jack Rowe (another in his GB debut) finished in seventh and ninth respectively.

It was a successful evening for the Brits elsewhere, with medals in both relays and both hurdles, and plenty of other noteworthy performances on the track and in the field. Here’s a whirlwind tour.

The men’s 4x400m relay team (Joe Brier, Owen Smith, James Williams and Lee Thompson) took bronze behind strong Dutch and Czech teams, the first medal Britain has got in the event since 2013. Credit to James for a very impressive leg, another athlete in his first GB vest.

In the final race of the Championships, the women went one better to take silver. They did so behind a Dutch squad that included individual gold medallist Femke Bol, who ran one of the all-time fastest indoor relay splits (49.99). The time of Zoey Clark, Jodie Williams, Ama Pipi and Jessie Knight was the third fastest by a British quartet.

A fantastic finish to the track events with a Silver medal in the women’s 4 x 400m! 🥈

It was a case of Sister Act in the 60m hurdles, with Cindy Sember and her older sister Tiffany Porter taking silver and bronze. I said yesterday that people who know me would know it’d be remiss to not mention Nadine Visser’s performance, and that is applicable again today. She defended her title with a PB and National Record of 7.77, which puts her =16th on the all-time list. A personal highlight of the Champs.

Andy Pozzi took silver in men’s equivalent, equalling his PB of 7.43. As expected, the heptathlon title was taken by European Record holder Kevin Mayer, scoring 6,397 points. The fight for the remaining medals was a much closer battle, and largely hinged on the 1000m that brings the seven events to a close.

In a chase for the bronze Dutchman Rik Taam was off like a rocket, at one point with an 80m or so gap on the seven others. He was rewarded with a PB (2:35.35, not bad after six events in two days), and a heptathlon PB, but finished in the agonising fourth place.

Jorge Urena and Pawel Wiesiolek took silver and bronze. As much as I love the multi events, there are others able to tell their story considerably more eloquently than I, so I shall leave it there. Other than to say kudos to Andreas Bechmann, who ran the 1000m with just one shoe.

That was, as they say, that. A superb four days of competition that has certainly whet the appetite for the outdoor season and – hopefully – the Olympics.

Congratulations to European Athletics and the Local Organising Committee for managing to make it happen, and for providing excellent live results and live streams, including dedicated videos for every separate event. I would have been there if it had been permitted, but I have enjoyed watching at points four streams simultaneously on four devices.

Also, thank you for those who have read these round ups and previews, and to Fast Running for giving me the chance to share my track and field passion with others.

To DQ or not DQ, that is the question
Strong marathon team for Euros