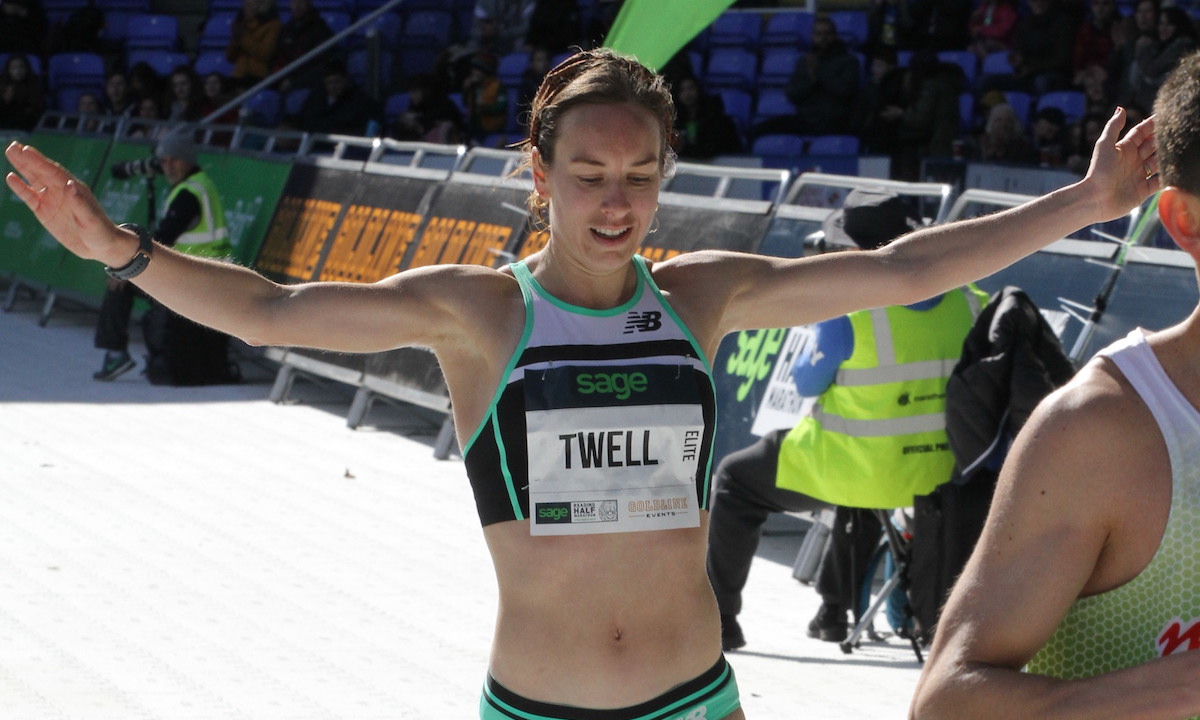 Well, what a weekend. Abroad and on home turf British and Irish athletes turned out amazing performances. These are the kind of weekends we love, the weekends when we see all the hard work come to fruition, the weekends that keep us glued to race trackers and twitter feeds as we shout and will our fellow athletes on. So, settle in and bask in the glow of an amazing few days of racing.

Where else could we start but with the Frankfurt Marathon? The GB lineup of Twell, Carruthers and Spink was always going to keep us entertained and it didn’t disappoint. After making her marathon debut last year in Valencia where she ran a controlled 2:30 it was clear that Steph Twell would be after an Olympic Qualifying Time.

She went out with intent and paced the race perfectly to finish 8th in an awe-inspiring 2:26:40. That time means that she tops the Scottish all-time list and according to Scottish Athletics she is the eighth Scot to set an outdoor National record this year. In addition she moves to the 5th on the UK all time marathon list ahead of Priscilla Welch and Liz McColgan.

Hayley Carruthers looked to be going out with a similar intent of getting an Olympic qualification time but faded a little from 15km and pulled out after 30km having been passed by Jenny Spink. From frustration to elation, you only have to look at this video to know what the 2:31:14 (13th) run by Spink means to her;

Still don’t have the words… but so happy to have run well today. Still can’t believe it 2:31! . . . #frankfurtmarathon2019 #runningintothefinish #PB #facesaysitall

Hawkins PBs with strong performances from Scott and Navesey

It wasn’t just Twell who was giving Scotland something to pay attention to over in Germany – Derek Hawkins showed that he is coming back strong from injury, running a 2:12:49 PB to finish in 10th place.

The England team of Aaron Scott, Paul Navesey and Peter Le Grice were also in action. Aaron Scott finished just outside his PB with a strong performance of 2:17:05 with a lot of solo running in the second half after his training partner Josh Lunn stopped after 25km. Navesey clocked a new PB with a negative split crossing the line in a super 2:17:16. Le Grice went out very hard and was not far off his half marathon PB pace through 10km on 2:09 pace but paid later in the race before but toughed it out to finish.

Irish athletes Eoin and Tommy Hughes broke the father and son world record with Eoin clocking 2:31:30 but beaten by a stunning 2:27:52 from his father. The overall winner was Fikre Bekele in 2:07:08

Before the Valencia Half Marathon organisers were talking up an attempt on the women’s world record. Alas, a fall early on left favourite Sifan Hassan to finish in a surprising second place finish behind Teferi Sora who won it in 65:32.

After battling SI issues for a while it was great to see Lily Partridge show a return to the kind of times we know she can run. Her 71:58 will give her confidence for the final stages of her buildup before she returns to run the full marathon in December. Emma Mitchell of Ireland had a good day, running a sizeable PB to finish in 72:28.

Valencia HM 2019! Relieved to be back running something respectable and my body felt strong throughout. 5 weeks to go.. time to turn respectable into good 💪🏽🌞 #halfmarathon #marathontraining #valencia #adidas

It wasn’t just those racing abroad that had their speedy shoes on this weekend. The Dublin Marathon has always worked well for Natasha Cockram and this year was no different as she knocked yet another chunk of time off her marathon, finishing in 5th place in 2:30:49 despite being kicked by a horse on Wednesday and running with a huge bruise on her leg. Hardcore.

Surely this makes her one to watch for the future (the time, not the bruise). For a big chunk of the race she was well inside the Olympic qualification standard and should not be considered a contender near year. Her time saw her break Susan Tooby’s Welsh National marathon record.

In a wonderful debut performance Charlotte Taylor-Green finished in 12th in a time of 2:36:54. Pretty impressive for an athlete who until recently was very much focused on middle distance running. Katie Wood was 18th in 2:43:12. The headline from the Leeds Abbey Dash 10k has to be the stunning piece of racing produced by Charlotte Arter (Cardiff AC). She ran 31:34 to not only win the race but also put herself in between Wendy Sly (31:19 in 1983) and Laura Weightman (31:39 earlier this year) to place 5th on the all-time GB rankings for the 10k.

Loughborough Student Abbie Donnelly clearly benefited from the extra hour in bed too as she appears to have knocked a mind bending two minutes and 30 seconds off her PB when she stormed home in 32 minutes flat for second place.

To put that even further into context, she beat Beth Potter who wasn’t exactly off-pace given that she ran only two seconds off her best and finished in 32:05 for third. Indeed Jess Judd, who has been on fine form this year and ran a solid PB herself, was outside the medals with her 32:11. Charlotte Arter and the rest of the Welsh team at Leeds Abbey Dash. Credit: Welsh Athletics

Not to be outdone by the ladies, Omar Ahmed was also looking to give an update to his Power of 10 column. The Birchfield Harriers’ athlete broke the tape in 28:38 which was a nice comfortable 15 second upgrade on his previous best, though a not so comfortable lead over the line.

It was Stockport’s Ross Millington who was chasing Ahmed down all the way to the end to shave one second off his own PB, finish one second behind the winner and finish in 28:39! Ducking out of Cross Country duties, Adam Craig of Inverclyde AC was third in 28:45.

Hawkins on show in the Scottish National XC Relays

On Saturday Cumbernauld House Park was host to countless Scottish athletes who lined up to put best spiked-foot forward for their teams at the Lindsays Scottish Athletics National Cross Country Relays. Both genders were running 4 x 4000m and as always, it was a very competitive race.

Topping the team podium in the women’s competition was Edinburgh University’s Hare and Hounds thanks to Johnson, Nankivell, Jaffray and Page running a 58:40. Nearby rivals Edinburgh AC were next in 59:59 and Bronze went to Giffnock North A.C (1:00:07).

It was Central AC whose 49:16 showed their continued dominance as they took the gold for the men, in part thanks to a great run from Jamie Crowe who was the only athlete to run under 12 minutes for one leg of the race. Callum Hawkins was back from Doha to compete for Kilbarchan and he and his team mates took Kilbarchan AAC to silver in 50:00. Inverclyde AC finished in the 50:16 to claim bronze.

A strong starting field at the Snowdonia Marathon suggested that John Gilberts’ 2:33:38 from 2015 might be in trouble. However very tough conditions was always going to make that hard but Callum Rowlinson got very close with an exceptional 2:34:14 which was some way ahead of his closest rival.

Daniel Connolly (2:38:26) was next home after conquering the punchy final climb to 1,200ft at Bwlch y Groes and the quad destroying downhill finish. Martin Green took was third in 2:41:18. James Thie is normally used to indoor tracks and shorter distances but he was out in the Welsh mountains to take on his first ever marathon. He finished in 2:59:19, commenting that it was a ‘humbling’ experience after he went through 20 miles in the top 10 and then struggled towards the end finishing in 22nd place after a heavy fall on the final descent.

The women’s course record (2:57:55 by Hayley Munn) was also untroubled and looks pretty invincible. This year’s winner was Andrea Rowlands who finished in 3:09:18. Anna Bracegirdle was second in 3:09:54 and Danielle Higham thir in 3:13:23. A full report on the race will be published tomorrow. Camille Herron, of the USA, ran a world record of 167 miles (tbc) to secure the win in the women’s competition, with her trademark fast starting style paying dividends once again.

In the men’s race it was a slightly more controlled start than usual for Aleksandr Sorokin of the USA. The Lithuanian has dug deep to medal in the past but never won a gold. The British men’s and women’s teams both eventually finished fifth, after looking like they were comfortably chasing third place they lost rankings in the latter stages.

As is the nature of 24hr running, it is often how you deal with the inevitable adversity that shows the character of the performance and the fact that all 11 GB Athletes were still out on the 1491m loop at the end was a great sign.