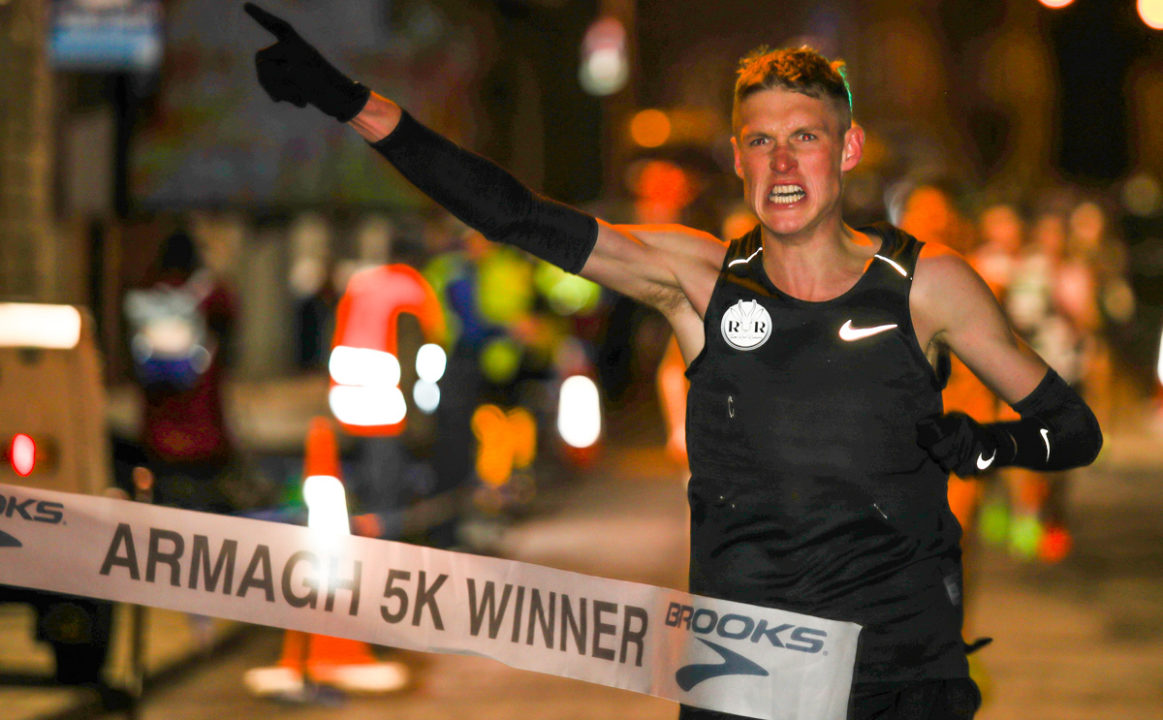 If you wanna be a record breaker…. this was the week for it as records tumble in races from Armagh to Monaco, Dublin to Glasgow.

Where to begin? What a week! On the roads and the track indoor and outdoor our athletes have really been putting their winter training to the test and reaping the rewards.

Getting us off to a flying start was Ciara Mageean (City of Lisburn AC/ Team New Balance) who broke her own Northern Irish Senior record, ran a PB and a Stadium Record at the AIT International Grand Prix in the Women’s 3000m on Wednesday night.

After battling with GB’s Rosie Clarke from the start the Northern Irish Olympic hopeful won out and Clarke had to settle for second in 8:49.49. Third place also went to team GB – Beth Kidger finished in 9:18.53 and Eloise Walker set a GB U20 record to finish fourth in 9:21.30. Read more here.

The Men’s Mile was similarly competitive. Ethiopia’s Samuel Tefera ran a PB of 3:55.86 for the win, followed by Ireland’s Brian Fay who bettered his previous indoor record to take silver in 4:00.77 ahead of Brazil’s Thiago Andre (4:01.55). Also heading home with a PB was Adam Craig who placed sixth in 4:03.34

Møller and Clarke win in Armagh

It was a night to remember at the Armagh International Road Races. Not just for the scrappy beginning of the men’s race that saw several tripped, stumbling or even falling in the crush to get a fast start.

Near perfect conditions led to 50 women running under 10 minutes in the Intersport Women’s 3k. 135 men ducked under 15 minutes (113 last year) in the 5k, with 21 going sub 14. In that depth of field it is not surprising that it took a new course record to secure the win for Anna Emilie Møller in 8:58 with Adam Clarke clocking 13:42 in an exciting finish.

Blazing after Møller in the women’s 3k was Alex Bell, who would normally race over 800m but appears to have plenty to offer over longer distances. According to her twitter she rather enjoyed the chance to stretch out her run and was rewarded with the silver in 9:06. Amy Griffiths was just behind Bell to take third in 9:09 and Kate Avery was fourth in 9:10.

For the gents, it was Johnny Davis and Phil Sesemann who were both just two seconds behind Alex Clarke in the 5k to take second and third with the same time of 13:44. As suggested by the crazy start, the race was a battle for every place, and the next two positions were also neck and neck at 13:46 for Phil Norman and Jake Shelley.

When you realise that the race record is within reach, and the finish line smile changes slightly😁🙃 Had good fun racing my first 3k on the road last night! Didn’t really focus on the time – just 👀 on the 🏆. Enjoyed the great atmosphere in Armagh, a nice little town in Northern Ireland. Definitely worth coming back for👍🏼 Ciara🌪 had left, so this time the race was NOT cancelled. Last weekend I wasted a trip to Holland, where I was meant to run a 10k, which Ciara🌪 cancelled.. So I was pleased to finally get to do a road race again🙌🏼 | 📸: Keith McClure

Scott, Reekie, Muir and Learmonth impress on the track

In Seattle, Washington the Husky Classic 3000m was part of a weekend of indoor racing and resulted in a 7:46.11, a little indoor PB and second place for Mark Scott of Cambridge & Coleridge who was running for Bowerman Track Club in this setting. James West who was running for Oregon but is a Tonbridge athlete when on home turf ran a sizeable PB to place sixth in 7:47.10 with Jack Rowe 10th in 7:51.00.

It is weekends like this when athletes thank their lucky stars for indoor meets. With races being cancelled left right and centre on Saturday, the Müller Indoor Grand Prix Glasgow was a safe haven for runners wanting to burn it up on the track. In the Men’s 800m Adam Kszczot of Poland took the 10 points for top spot in 1:46.34. Scotland’s Guy Learmonth ran a 1:47.16 for third with Josh Kerr and Elliot Giles fourth and fifth but with the same time of 1:47.40 and Alex Botteril seventh in 1:47.77

What a day!!! Thanks so much for all the messages today, love being back to my old self!!
Put so much graft in the last few months to get back here and I couldn’t be happier. My team is the best in the world!
Now the ball is really rolling!! 🦍 #TeamNB #F8TC pic.twitter.com/PFd1vobyZS

The Men’s 1500m victory belonged to Bethwell Birgen of Kenya in 3:36.22. First home for GB was Piers Copeland who took fourth place in a new PB of 3:38.81. Following him for GB were Geroge Mills in 3:39.25 for sixth (also a PB) and Archie Davis in seventh 3:44.48. Charlie Da’vall Grice sadly had a fall midway through the and Jamie Webb also did not finish.

Laura Muir proved that although she’s battled injury over the winter she can still command a strong victory in the Women’s 1000m. The Scot said it was a tough race, commenting “I was a little down at 600m and oh that last lap was so sore“, but nevertheless she took home the win in 2:33.47 and will “be back out training in the wind and rain tomorrow” ready for the outdoor season.  Adelle Tracey couldn’t quite reach Muir and had to settle for second in 2:37.95 to make it a GB one-two.

It was Muir’s training partner Jemma Reekie though who grabbed everyone’s attention yet again. After breaking the national 800m, British indoor mile and British indoor 1500m records just weeks ago Reekie just went and churned out a 4:04.07 to grab top spot in the 1500m ahead of Ethiopia’s Dawit Seyaum (4:04.24). Reekie said ““It was a good race and a good confidence boost. I try to focus on myself out there because I’ll only ever work with the pressure that I put on myself and I don’t feel it off other people.”

On Sunday morning at RunMonaco, the 5k World Record was smashed to smithereens by Uganda’s Joshua Cheptegei. He went into the race ‘thinking of sub-13’ and he certainly achieved it with his 12:51. That makes him 27 seconds faster than the previous best.

Meanwhile it may not seem very spring-like here at the moment, but the season for long distance road running IS warming up and athletes were tuning up and testing out at the Barcelona Half Marathon.

Good conditions at the start gave way to a bothersome headwind at 15k. This caused a lot of runners to slow in the latter part of the race but didn’t stop some impressive times. Kenya’s Victor Chumo broke the tape in 59:59 to go sub-1hr for the first time.

Went for it today. 28.37 through 10k and a few seconds outside 46mins through 10 miles, then blew up a little. 😬 still happy to hold on for a 61.33, my second fastest time over the distance. In a good place with 10 weeks to go 👌🏻 #Londonmarathon #ne… https://t.co/WwVbovOTwg pic.twitter.com/2pZSjWbiZw

Charlotte Arter has a good history with the race, having run a Welsh record there last year to finish fifth in 69:40. This year she was chasing the likes of Ethiopia’s Ashete Bekere who won in 66:37. She couldn’t quite beat her 2019 showing but came close, placing sixth in 70:00 right behind Valencia Marathon winner Rosa Dereje. Ireland’s Fionnuala McCormack finished just outside the top 10 in 71:39 and Samantha Harrison ran a huge PB to scrub out her 73:01 on Power of 10 and replace it with a 71:43 and 13th place.

A rather different half marathon experience awaited those taking part in the Kinloss to Lossiemouth Half. The point to point course had forecast a tailwind gusting into the 30s. We’re awaiting official results but a bit of Strava stalking suggests that Kenny Wilson was blown to a PB of 64:55 and Robbie Simpson ran 65:00.

RunThrough Battersea Park 5K / 10K beat at least the worst of the storm on Saturday morning in London. Lucy Reid was a little way outside her PB with 35:29 but claimed the win. Steph McCall of Herne Hill Harriers followed her with 35:42 and Lou Hunter rounded out the podium with a 35:53.

Jo Meek hit the trails in Arizona and took fifth place at the Black Canyon 100k in 9:49. In Costa Rica the Coastal Challenge, a multi stage race over 6 days with 10, 000m+ of elevation over 236k through rainforest, mountains, river valleys and beaches sounds like a beast of a race. It was enough to stop Oxford City’s Rebecca Ferry who finished the whole lot in 17:57:12. Susie Chan finished third with an overall time of 21:14:31.

I tried my hardest but it wasn’t good enough. 5th in #blackcanyon100k

🙏🏻 @aravaiparunning for hosting such a great race

Most Cross Country races seem to have been cancelled or are awaiting results. Club runners could still have their fix against each other in the North East Road Relays. Gateshead Harriers were victors in the women’s race in a combined time of 52:33 thanks to their team of Chloe Wellings, Gillian Manford Jane Giles and Innes Curran. For the men it was Kieran Hedley, Taylor Glover, Dan Melling, Rowan Bennett, Sam Hancox and Adam Pratt who grabbed the premier honours for Morpeth Harriers.