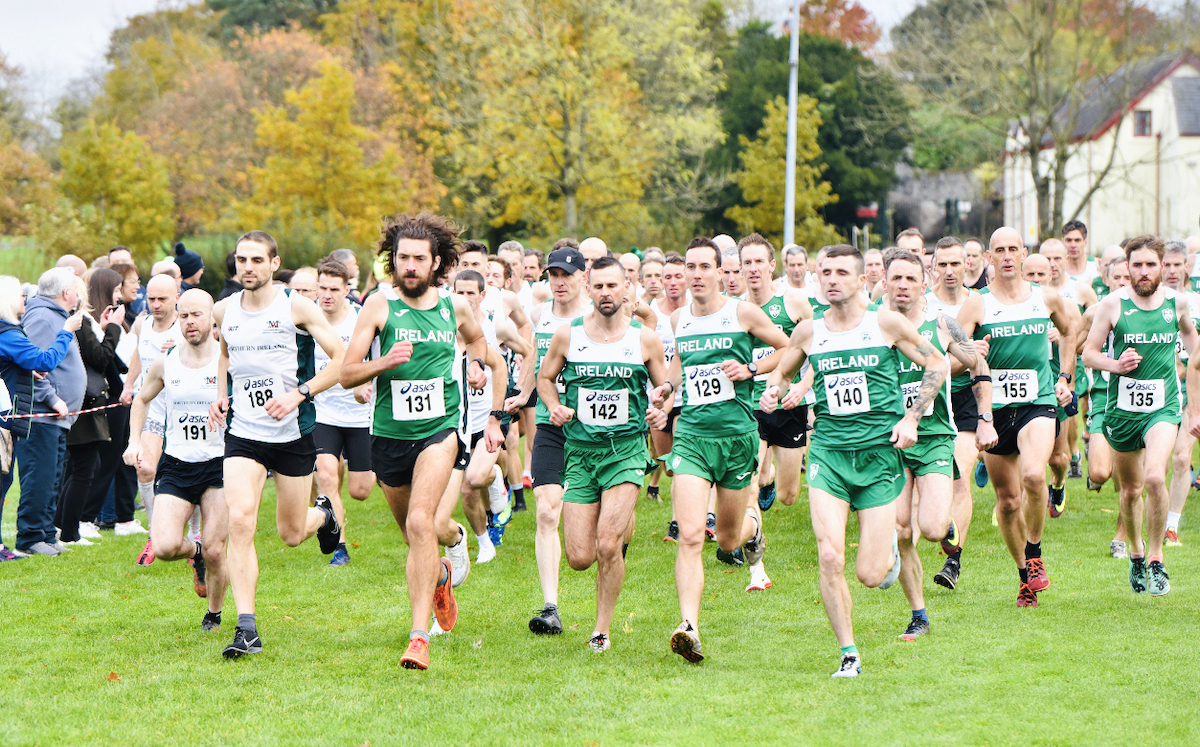 In the North v South (Ireland) Masters cross country match on Saturday two weeks ago, a tall and powerful figure was in the lead group, covering every move with ease as the pace was forced on, before kicking away for a fabulous victory.

As John Craig (Annadale Striders) crossed the line for Northern Ireland, to a rousing cheer, he was mobbed by his ecstatic kids who had earlier been seen accompanying their Dad on his warm-up.

It has been a stellar year for John. But where did he come from? Why is he setting four PBs in his third year as a veteran athlete?

Thankfully he took some out to answer a few questions put to him by Lee Maginnis. Enjoy the read.

Lee Maginnis: “When did you start competing?”

A nasty cruciate ligament injury put a stop to my rugby career when I was 20. I wasn’t involved in sports much through my 20s, apart from a bit of indoor football here and there.

My wife and I had our first child and I was getting a bit on the chunky side, so when I was nearing 30, I decided to do a bit of running for general fitness and to lose weight. I started doing my local parkrun and noticed my times coming down every week, so I decided to join a running club as I had well and truly caught the bug, and the rest is history!”

LM: “Are you from a sporty family?”

JC: “My family have always enjoyed being active, and from a young age my parents got me into sports in general (probably to keep me out of mischief – which didn’t really work). They always supported me a lot in my sporting endeavours.

We always had an outdoor lifestyle, and I was blessed to go on some great holidays, where we did a lot of walking/hiking in places like the Lake District, Rocky Mountains etc. My parents also had my siblings and I climbing the Mournes regularly when we were kids. I always loved that, and I suppose unconsciously I was building a good base fitness from having a very active childhood!

My brother Aaron was a good hockey player and played alongside some top class Irish Internationals at my school Wellington College. They went on to win the all Ireland schools final. Being my big brother, he was always an influence on me, both in my sporting and musical interests.”

LM: “What are your best achievements to date?”

JC: “I would say my greatest achievements to date have been winning the Irish Masters 5000m championship in 2020, winning team gold medals with Annadale at the NI 5K road championships and NI road relay championships this year.

And more recently winning the NI Masters XC Championship, then winning the North vs South XC Challenge shortly after. I’m also happy to have posted some decent times on the track this year.

LM: “What is your favourite race?”

JC: “I would have to say the Seeley Cup 10K. It attracts the best runners in the country and is always super competitive. Every time I’ve competed in it, I’ve run big PBs (plus it was my first ever 10K), so I’ve got great memories of the race.

I’m very much looking forward to it this year, as the entry list is stacked with top quality runners. It’ll also be extra special, as it’s incorporating the NI 10k road championships.”

LM: “What do you put your success down to?”

JC: “I would say consistency and patience, as well as discipline and smart training. But even more than these things is my inherent love of the sport and hunger to succeed.

Last but not least is great coaching, mentorship and support through the years. Much credit has to go to my previous coach Keith Purdy and current coach Paul Lawther. Joining Annadale Striders last year marked a big improvement in my running. There’s a real culture of excellence at the club and we’re all about competing to win championships!

I have a very supportive wife and kids. Family life keeps me grounded and helps keep any ego at bay – I’m quickly brought back down to earth after any of my wins!” LM: “What are your ambitions and targets?”

JC: “I would love the opportunity to represent NI & Ulster at senior level on the track, road and cross country. Individually I would like to win a few NI Senior titles and have a crack at some British masters titles. With my club Annadale Striders, we are hoping to win loads more team titles on the road and cross country!”

JC: “Paul Lawther (Annadale Striders). He’s a great coach and a local running legend. He was a top level International athlete when he was competing and used to mix it with the likes of Steve Ovett back in the day. His Northern Irish 3000m record (7.49.1) set in Oslo in 1978 still stands to this day!”

LM: “What is your favourite training session?”

JC: “Generally 3K – 5K pace speed work on the track (with a bit of mile pace stuff thrown in). I just love that zone where you’re moving fast round the track – working hard, but not forcing it too much. I like to jog recoveries and keep them fairly short. It keeps the session moving along in a nice momentum.”

JC: “Mostly solo for me. I sometimes like training with a group for certain sessions (mainly the very fast stuff with long recoveries pre track season), but I mostly like to get locked into my own pace/rhythm. I have no problem pushing myself as hard as I need to on my own. ”

LM: “What are your favourite foods?”

JC: “If we are talking favourite foods, I would have to say good quality Asian food – Malaysian, Thai or Indian (although I’m also partial to a big Ulster fry up!). I like to keep my diet fairly sensible throughout the week and eat a lot of fish (mostly mackerel), rice, vegetables, eggs, fruit, nuts etc. I enjoy healthy food, but don’t deprive myself of treats here and there!”

LM: “Do you have any other interests/sports?”

JC: “Aside from having fun days out with my wife and kids, I’m a huge music lover and have been DJing for almost 20 years.

I’ve played in venues all over Ireland and the UK and held down residencies at various venues. I also produce my own music and have had music released on a few established European labels.

I’ve taken a bit of a hiatus from music production for the past couple of years to really focus on excelling as much as I can at running, but I still have all my studio gear and plan to get back at it!”

If you enjoy our Fast Running website then we highly recommend the book 1001 Running Tips by our editor Robbie Britton, found here.

A day of two different races – Irish round-up
Calm before the Euro-Cross storm?