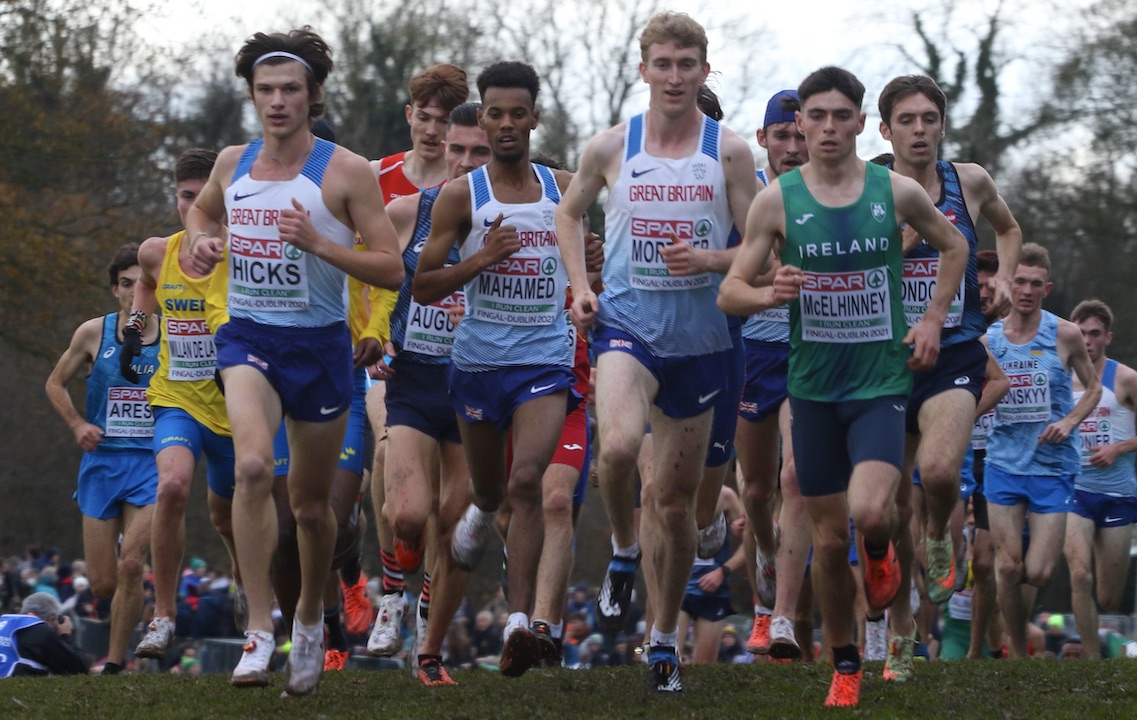 The show was stolen by the cross country this weekend, but Lindie Naughton brings you the full Irish round-up.

A stunning team victory by the men’s U23 team proved the highlight of the European Cross Country Championships held at Abbotstown, just to the west of Dublin on Sunday (December 12) .

Leading the team home in a fighting second place was UCD student Darragh McElhinney from Glengarriff in Co Cork. On the final lap of the 8000m race, McElhinney had briefly led but he could not quite hold off the challenge of Britain’s Charles Hicks.

“Charlie made it hard. I did my best to stay with him,” said McElhinney after the race. “In the second lap I made the decision to sit back off him. Then in the second last lap, I said to myself if I put it a hard lap in here, it’s a medal guaranteed, so I ended up closing the gap on him, and we knew it would come down to a bit of a kick. I’m happy with second, but the fact that the team pulled it out of the bag, I’m over the moon. I’m buzzing.”

McElhinney was backed up by Keelan Kilrehill of Moy Valley AC, sixth, and Michael Power of West Waterford AC 13th, with Donal Devane of Ennis TC, Jamie Battle of Mullingar Harriers and Thomas Devaney of Castlebar AC making up the squad.

After they had collected their medals, the delighted team winners did a much interrupted lap of honour around the course stopping frequently for congratulations and photos. On a great day for the host country, the U20 men took team silver, led by Abdel Laadjel of Donore Harriers, one of a number of athletes who had returned from the USA for the occasion.

Laadjel ran a smart race, catching his team mates Dean Casey of Ennis TC and 16-year-old Nick Griggs of Mid-Ulster AC on the final lap. With Casey finishing 13th and Griggs 16th, Ireland lost out on gold by a single point to the British team. Making up the squad were Scott Fagan of Metro St Brigid’s AC, Sean Fay of Clonliffe Harriers and Cathal O’Reilly of Kilkenny City Harriers. Of the women, Sarah Healy of UCD AC finished fifth in the U23 women’s race, having moved into second place at one point. With Danielle Donegan of UCD AC 31st, and Aoife O Cuill of St Coca’s AC 32, backed up by Lauren Tinkler and Jodie McCann, both of Dublin City Harriers AC, and Ruth Heery of Waterford AC, the team finished fifth.

“It was challenging,” said Healy, who at 20, still has two years left in this age category. “That hill down the bottom takes it out of you every time, but it was such a great atmosphere. I’m disappointed to not get a medal, but I just had nothing left at the end. Fifth place is still good.”

Best of the U20 women was Aoife McGreevy of UCD AC who finished 23rd. One place behind was Emma McEvoy of Dundrum South Dublin AC, who has only taking up running in the past year. With national champion Jane Buckley off Leevale AC 30th, the team finished eighth. Also running were Rebecca Rossiter of Loughview AC, Laura Mooney of Tullamore Harriers and Roise Roberts of North Belfast Harriers. Exciting senior racing for all, but especially Norway

In the senior races, Fionnuala McCormack of Kilcoole AC pushed hard from the start of the women’s 8000m, showing no signs of having run a marathon personal best time only a week earlier.

She finished ninth in a race won by Karoline Bjerkeli Grovdal, who was making it a senior double for Norway.

“It was always going to be tough to be up at the front but that’s where I wanted to be, it was great out there” said McCormack.
“The support was unbelievable. It’s amazing to run a race where you just hear everyone roaring at you. When everyone is shouting ‘Fionnuala’ at you, it’s nice. In Dublin twelve years ago, I had a really tough race. Today was tough but it was better.” Brian Fay of Raheny Shamrock AC, another athlete who had returned from the USA to compete, ran a tactical race to finish tenth in the senior men’s 10,000m race behind the Olympic 1500m champion Jakob Ingebrigtsen of Norway.

“I was happy. I always felt like I had momentum, alhough on that last lap I was just gassed, I was spent. But with everyone cheering you on, I’m like I can’t let the team – or the country – down. So I gave it everything,” said Fay.

Ireland started well in the mixed 4 x 1500m relay, with Ciara Mageean of City of Lisburn AC handing over to UCD’s Luke McCann in first place.

McCann held on to that lead, but on the third leg, Britain’s speedy Alex Bell caught and passed Síofra Cléirigh-Buttner of Dundrum South Dublin AC. Despite his best efforts, Andrew Coscoran of Star of the Sea AC could not catch the final leg runners for France and Belgium, who were also ahead of Ireland at that stage. In a thrilling chase for the line, the team finished a close fourth.

While it didn’t match the four medal haul of Lisbon in 2019, it was a good day for the host nation. Let’s leave the final word to Fionnuala McCormack, who was running a record 17th time in a race she lovesd and has won it twice.“Overall the teams, the U23 lads earlier, the whole day, it was massive with the top five and top ten finishes. It was brilliant.”

On the roads, Seamus Fearon in 76 mins 35 secs and Ciara Wilson in 83:28 were the winners of the Ray D’Arcy Laura Lynn Half Marathon held in the Phoenix Park, Dublin, also on Saturday. Jamie Fallon and Ciara Forrester won the 6km race.