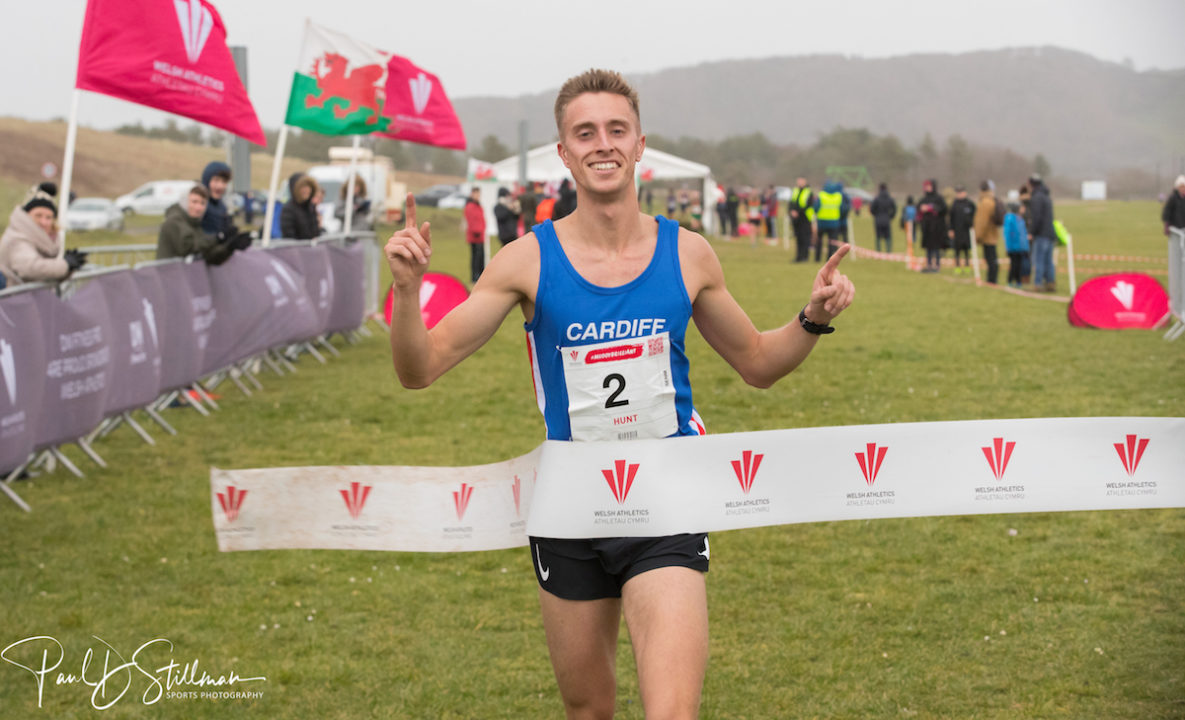 James Hunt overcame a classy field to elude Dewi Griffiths of an eight senior title at the 116th edition of the races held near Llanelli. Strong winds had threatened the event earlier in the week but conditions underfoot remained excellent on the undulating course around Pembrey Country Park.

2018 Champion Hunt had been a pre-race favourite following a 13:58 clocking over 5km at the Brooks Armagh International Road Races 10 days earlier. He was joined in the early stages by club-mate Ciaran Lewis and Swansea Harriers Griffiths and Morgan Davies.

Cardiff’s Dan Nash came past Griffiths in the closing stages to close a Cardiff only podium and help to ensure that the team title stayed with the club from the capital city.

Swansea Harriers were the second team with Pontypridd Roadents led home by Adam Bull in third.

‘It was nice to race Dewi and the other boys from the Welsh Cross Country scene’ said Hunt.

‘Conditions were tough but I went off quite hard at the start and I saw the boys trying to tuck in so I started to push hard in different parts of the course. Dewi finally dropped of the group and I never looked back so I’m really happy with that’.

Mel Wilkins of Wycombe Phoeonix Harriers was a convincing women’s winner, going one better than her silver medal spot from 12 months ago. Wilkins had looked confident from the early stages, sitting a few metres ahead of BUCS Silver medallist Lauren Cooper of Parc Bryn Bach Harriers. Wilkins used the undulating parts of the course to ease away from cooper and when she had established a gap, was never likely to be caught.

‘It was extremely windy out there today but it was brilliant to come back said Wilkins’. ‘Last year I came second so to come back and win today was a big aim for me’.

‘My long term aim is to qualify Commonwealth Games Marathon for Wales so that’s the big goal but I’m going to stay pretty chilled until then and see how I get on. I was very happy to come here today and win the title’. Dominic Smith ran solidly to claim the U20 men’s title ahead of Sheffield & Derne AC’s Sam Roberts with Aled Jones of Menai Track & Field in third.

There was a brave attempt by Cardiff AC’s Lloyd Sheppard to run away from Osian Perrin of Menai Track & Filed in the U17 Men’s race. It was Perrin however that timed his bid for glory perfectly to retain his title here.

Samia Jones of Menai Track & Field overcame last year’s U17 Champion Ashleigh Willis of Swansea Harriers to claim the U17 title and to win the combined U17 / U20 Women’s race outright. Martha Owen of Deeside AAC took U20 honours.

There were victories for local club Carmarthen Harriers courtesy of Frank Morgan and Iwan Thomas in the U15 and U13 Boys respectively.