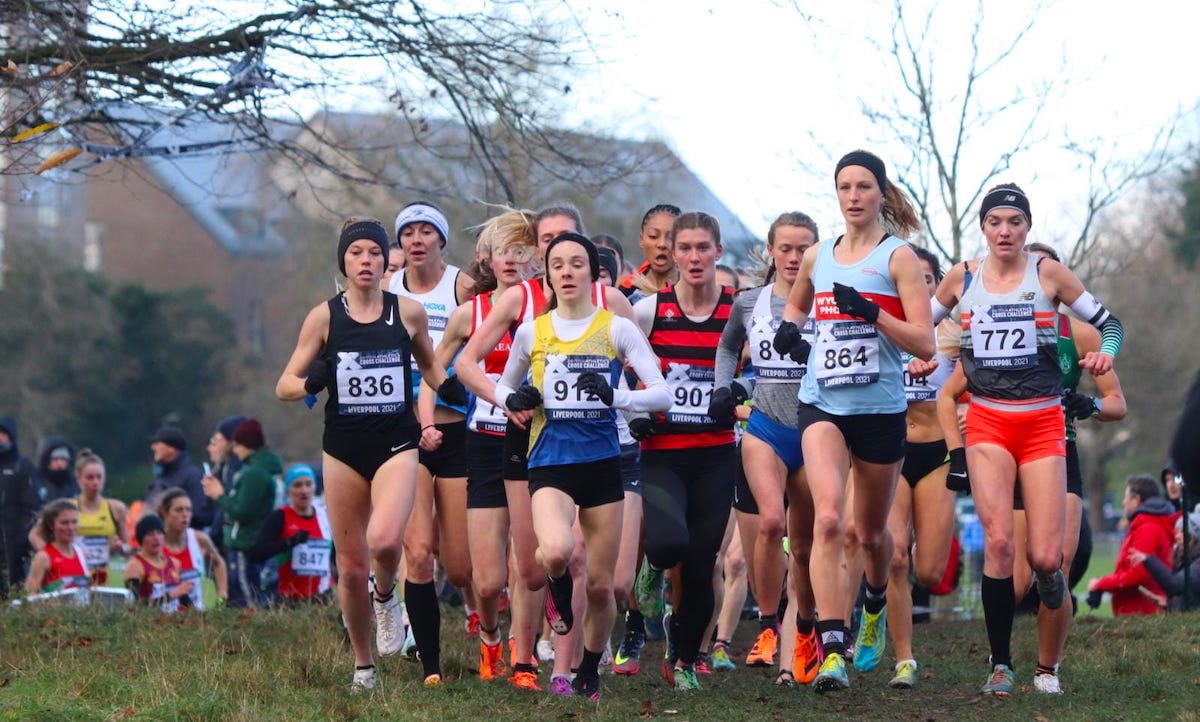 The recent form book of the Great Britain team for next week’s European Cross Country Championships is assessed by Dr. Matt Long.

Trials winners Jess Judd (Mick Judd, Blackburn Harriers) will be making her third appearance over the country after turning in a fast leg at Mansfield in the National Cross County Relays on 6th November. Runner up Jenny Nesbitt (Chris Jones, Cardiff) has run consistently strongly in all 3 British Athletics Cross Challenge races this year including runner up spots in both Cardiff and Milton Keynes.

Bronze medallist Abbie Donnelly (Rob Lewis, Lincoln Wellington) had a fine run both in the Mansfield based relays as well as a win over the country in Ireland at the Abbotstown Open Cross County race in mid October.

Jess Gibbon (Reading) won over the country in Milton Keynes and placed third in Cardiff, as well as having produced a performance in Liverpool which bodes well for Dublin.

Kate Avery (Shildon) took bronze in Milton Keynes and 6th in both Cardiff and Liverpool and will be delighted to have made the team, whilst Charlotte Arter (Chris Jones, Cardiff) still has to prove her fitness having not raced since a promising 2nd place in the Leeds Abbey Dash on 24th October. The men will be spearheaded by Jack Rowe (Tim Eglen, Aldershot Farnham and District) who won by 11 seconds over Andy Butchart (Barry Fudge, Central) in Liverpool last week. The Scot can boast victories in both the Scottish National Relay championships and Scottish National short course championships over the country this winter.

Jamie Crowe (Derek Easton, Central) was a further 11 seconds behind his yellow vested clubmate in Liverpool last week and has finished runner up to him in Perth and Lanark over the country this winter.

The confidence of William Battershill (Luke Gunn, Erme Valley) will be high after a sub 30 minute clocking and a victory in the Wilne 10k (29m54s) back in September. Stuart McCallum (Bud Baldaro, Winchester) ran strongly at the National 6 stage road relays in September, whilst Jake Smith (James Thie, Cardiff) impressed massively in placing a fine 4th in September’s Great North Run.

7th placer Izzy Fry (Steve Vernon, Newbury) has turned in solid performances over the country all winter most notably at Cardiff and Mansfield, with trials 11th placer Cari Hughes (Andrew Walling, Cardiff) perhaps impressing most with a 6th placing at The Milton Keynes version of the British Cross Challenge. Taking 4th place in the trials was Amelia Quirk (Mick Woods, Bracknell) whose only other outing over the country this summer has been a win in the Midlands Womens League at Crewe.

10th place in the trials was Eloise Walker (Andy Young, Edinburgh) whose five outings over the country have included a fastest leg at the Scottish national relay championships.

On the mens side, 16th in the trials was Sam Charlton (Helen Clitheroe, Wallsend), who has turned in a fine 29m17s at the Leeds Abbey Dash 10k.

Stanford University based Charles Hicks (Ricardo Santos, Shaftesbury Barnet) has raced no less than 9 times over the country in 2021 whilst Stateside, and likewise Oklahoma State based Rory Leonard (Morpeth) has been similarly prolific over the country but did return home to place 10th in Liverpool at the trials. 15th placer in Liverpool was Zakariya Mahamed (Idris Hamud, Southampton), who has caught the eye earlier this year both in Milton Keynes (2nd) and Cardiff (4th).

Tom Mortimer (Chris McGeorge, Stroud & District) ran a fine 4th in Liverpool and has the benefit of overseas excursions over the country both in Ireland and the Netherlands earlier this winter. 12th place in Liverpool was Matthew Stonier (Peter Mullervy, Invicta East Kent) whose winter form builds on summer success and a fine 3000m win at the Loughborough International last summer.

With regards to the ladies, Columbia University based Phoebe Anderson (Wayne Vinton, Herne Hill) placed 5th in the trials and has run well Stateside this winter in Boston and Princeton especially.

Alice Garner (Mick Woods, Aldershot, Farnham and District) placed 3rd in the trials and her selection follows a fine 4th over 5000m at the European junior championships this summer.

7th placer (2nd U17) in the trials was Ella Greenway (Joanna Louise Evans, Cleethorpes) who performed superbly on the track last summer in BMC races, including a win in the BMC Festival of Miles at the Linford Christie Stadium.

The men can boast the presence of Hamish Armitt (Crawford Whyte, Giffnock North) who placed 4th in Liverpool on the back of a win at the British cross challenge in Milton Keynes.

2nd place at Liverpool was Will Barnicoat (Aldershot Farnham and District) who ran an eye catching leg at the National cross country relays in Mansfield earlier this winter.

Osian Perrin (Andrew Walling, Menai) who placed 3rd in Milton Keynes has also raced sparingly over the country as has the aforementioned McLuckie, whilst Liam Rawlings’ (Colin Lancaster, Shrewsbury) 3rd placing in Liverpool was a follow up to his runners up spot in Milton Keynes. Alex Bell (Andrew Henderson, Pudsey and Bramley) is fresh from her Tokyo Olympic 800m final, whilst Luke Duffy (Richard Massey, Mansfield) is a 3m42s 1500m man and a 4m06 miler.

Matt Long has served as both an England Team Manager and Coach and welcomes contact at mattlongcoach@gmail.com for coaching support.