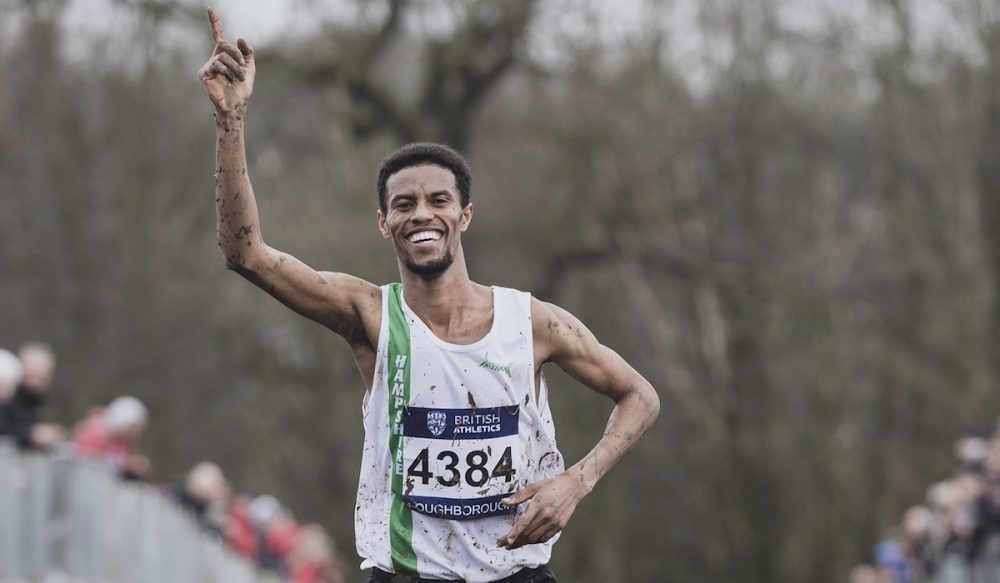 Cross country season came to a close with the Inter-Counties and there was some quality racing on the roads, all brought to you by Hannah Irwin.

Dannatt claims the biggest win of her career

The CAU Inter-Counties Cross Country Championships traditionally signify the close of the cross country season. Hundreds of athletes headed to the mud ridden Prestwold Hall to take part this year in the event doubling as the final Cross Challenge in the series.

With the amount of rain dumped on the country recently there was no doubt that the course would’ve been deep in mud, and that it was. Athletes fought for their county as they bounded through the relentless, thick clay. The tough 10km course turned out to be a slightly soul destroying 1.3km longer too for good measure!

After the postponement of the World University Cross Country in Marrakech due to coronavirus, Charlotte Dannatt made a last-minute decision to race but wasn’t it a good job she did? Dannatt took home the biggest win of her career and admitted after she didn’t quite know how the break the tape!

📝 Our report from the Cross Challenge series finale in Loughborough here #MuddyBrilliant https://t.co/AP9ynBkYSe

The silver medal went to Oxfordshire’s Jess Gibbon, who has had an absolutely storming cross country season. After winning the Southern cross country, coming 4th at nationals, and dominating the Hampshire league, Gibbon said goodbye to cross country in style.

She also claimed 4th in the overall cross challenge series rankings. The third-place podium position went to Phillipa Williams of the North East after a cracking run. Williams ran at the World Mountain Running Championships last year and put her strength on the uphills to good use.

In fourth place was Dani Chattenton of the MK Distance Project. The 1500m runner has also had a brilliant season and was also selected for the World University team. In fifth place and gaining the winning title for the overall Cross Challenge series was cross country queen, Kate Avery. After racing at the European Cross-Country Championships for the seventh time in December and winning the Stirling Cross Challenge, Avery was a truly well-deserved winner.

Mahamed and Hickey the men to beat as Evans impresses again

In the men’s race, Mahamed Mahamed also gave an impressive performance to take home the gold medal. After Mahamed and Hickey pushed away from the main pack after the first half of the race, Mahamed stormed ahead to create a 15 second gap. Mahamed not only took the race win, but also captured the winning prize for the overall Cross Challenge Series for the third time.

Hickey came through in a convincing second place, a solid 39 seconds ahead of third place. The Essex athlete tied his laces on extra tightly after losing a shoe at the nationals and kept both feet in his spikes has he put in yet another impressive XC display.

Hickey was followed by ultra-runner, Tom Evans, who took home is first ever podium finish in the Inter-Counties with a stunning performance. The versatility of Sussex athlete is a very rare thing probably in world let alone British athletics. A man who can race 100k+ plus on the trails and yet still build new speed to use over the cross and on the roads.

🎽 @Mahamed1920 rounds off the day with victory in the senior men’s race in 37:21 #MuddyBrilliant pic.twitter.com/ZXGYWCSeUU

In the South East Lancashire League, more athletes took to the muddy fields of the UK. Craig Jones of M/R Ymca took home the winning title with a lead of 1 minute 20 seconds. Jones finished ahead of East Cheshire’s Robin Horner and Tim Greenald who came in second and third.

M/r Ymca also took the win in the senior women’s race as Rebecca Whalley was first to cross the line. It was Hayley Simpson from East Cheshire who followed 15 seconds behind Whalley. The bronze medal finish went to Heather Hughes, Whalley’s clubmate.

Out of the mud.

Not racing, but instead on pacing duty, was Charlotte Purdue. Purdue proved that her marathon build up is in full swing as she managed to knock out a time of 1:10.26 through half way at the Nagoya Marathon.

The Llanelli Half did not disappoint producing some fast times and fine performances. Luckily the sun shone for the athletes. After running at the Big Half last weekend and finishing 17th in 65:53 and racing the Welsh XC Champs the week before, Dewi Griffiths secured himself a convincing win in a rapid 66:52.

Griffiths was followed by Luke Williams (Guernsey) with a personal best by over 2 minutes in 69:53. Third position was claimed by Matthew Rees of Swansea in 71:04. In the women’s race the times were just as speedy.

Natasha Cockram secured herself the position at the top of the podium, doing International Woman’s Day proud. Cockram, who is coached by Tony Houchin set a half personal best of 75:27 with a five-minute lead. Second place went to Carys Hughes (Cardiff) in 1:20:35 and third place went to Rachel Davies (Swansea) in 1:23:36.

At the Saucony Cambridge Half Marathon, Cambridge and Coleridge dominated over the flat course that goes through the colleges of the beautiful University city. Jonathon Escalante-Phillips landed himself the victory title in a rapid 65:36, a PB after a fine 2019.

Escalante-Phillips was over 90s ahead of second place Chris Darling, also of C&C, with a time of 67:10, a lifetime best by just under two minutes. Alex Milne, recently selected to run for England over 100k, took third place in 67:25.

C&C dominated once again in the women. It was Victoria Knight who took home the win and was just seconds off her PB clocking 74:45. In second place with a time of 77:16 was Emma Hodson of Cambridge University Hare and Hounds with a best time by 2 minutes 45 seconds. The third-place medal went to Katie Brown (Trent Park RC) in 79:53.

At the Aldi Chester 10k, after also being disappointed by the postponement of the World University Cross Country, Dan Jarvis made a last-minute decision to race in his first ever road 10k. Jarvis had a cracking run to smash the 30-minute barrier.

The Bedford & County AC athlete crossed the line in a solid 29:45 to take the win from Kadar Omar of Birchfield Harriers in 30:15 . Omar boasts a PB of 28:39, which he set at Telford back in December. Third place went to Ian Crowe-Wright in a strong 30:33.

The winner of the women’s race was Charnwood athlete and British distance legend, Gemma Steel. Steel ran across the line in 36:22. Tessa McCormick (Vale Royal) shortly followed behind in 36:45 ahead of Joanna Marsden (Ellesmere Port) in 37:09.

Massive congratulations to the female winner of the 3rd @ALDIUK #Chester10K Gemma Steele in a time of 36.22! pic.twitter.com/X5LBImTK9K

The Jack Crawford 10k continued a weekend of fast road times. In first place, with an impressive time of 30:57, was John Bell (I.A.C) finishing just five seconds off of his lifetime best time. Corstorphine AAC runner, man Mark Haskett set a PB by over a minute with 32:34 for 2nd. Rounding off the men’s podium was Kevin Liddle of Garscube Harriers in 32:45, another PB by 52 seconds.

The first female finisher, also from Corstorphine AAC, was Jessica MacLeod. The U20 athlete ran an impressive 38:54. In second place, Ruth Fraser-moodie (Springburn Harriers) crossed the line in 39:47. Charlene Kelly (Dumbarton AAC) was third woman in 41:06.

Johnny Van Deventer took home the win at RunThrough Victoria Park 10k clocking 31:27, in his first ever 10km race. In 32:27, Angus Butler of Herne Hill proved the massive progression he has made over the past few years. With a previous personal best of 36:41 set in 2017, Butler took over four minutes off of his time. Third place was claimed by Erik Fossen Nilsen in 33:16. For the women, Sophie Ballie took to win in 41:05 followed by Heather Wilson and Konstantina Rapti in 41:59 and 42:41 respectively. The half marathon event shows some very odd chip times so we won’t even go there…

The win at the Surrey Half Marathon went to Ben Cole (Tonbridge). Cole stopped the clock on 70:22, 33 seconds ahead of second placed Max Dumbrell. The Horsham Blue Star runner crossed the line 70:55 ahead of third placed Alastair Cambell 71:12. The women’s title was claimed by Katie Harbon of North Herts with a personal best by almost eight minutes in 82:44. Rebecca Hair was second in 83:58 and Becky Morrish completed the women’s podium in 84:44.

At the Surrey Half 5k it was the juniors who came to the fore with some storming runs. U17 athlete Ryan Symington (Poole AC) had a fantastic run in his first ever road 5k, the junior ran an impressive time of 15:29. Stephen Blake crossed the line at the exact same time, also 15:29 for a rare tie. In second position, just one second behind the winners was Max Duckworth (AFD) also an U17 athlete.

Third place went to Charlie Kershaw (Windsor Slough Eton & Hounslow) in 15:39 in his road 5k debut. For the women, Junior athlete Jemima Ridley claimed the win with a time of 19:03. Guildford & Godalming’s U13 athlete, Katie Pye ran her first sub 20 time for the 5k distance, stopping the clock on 19:20. Third was claimed by Emmie Savory in 19:25, also her first sub-20 clocking.