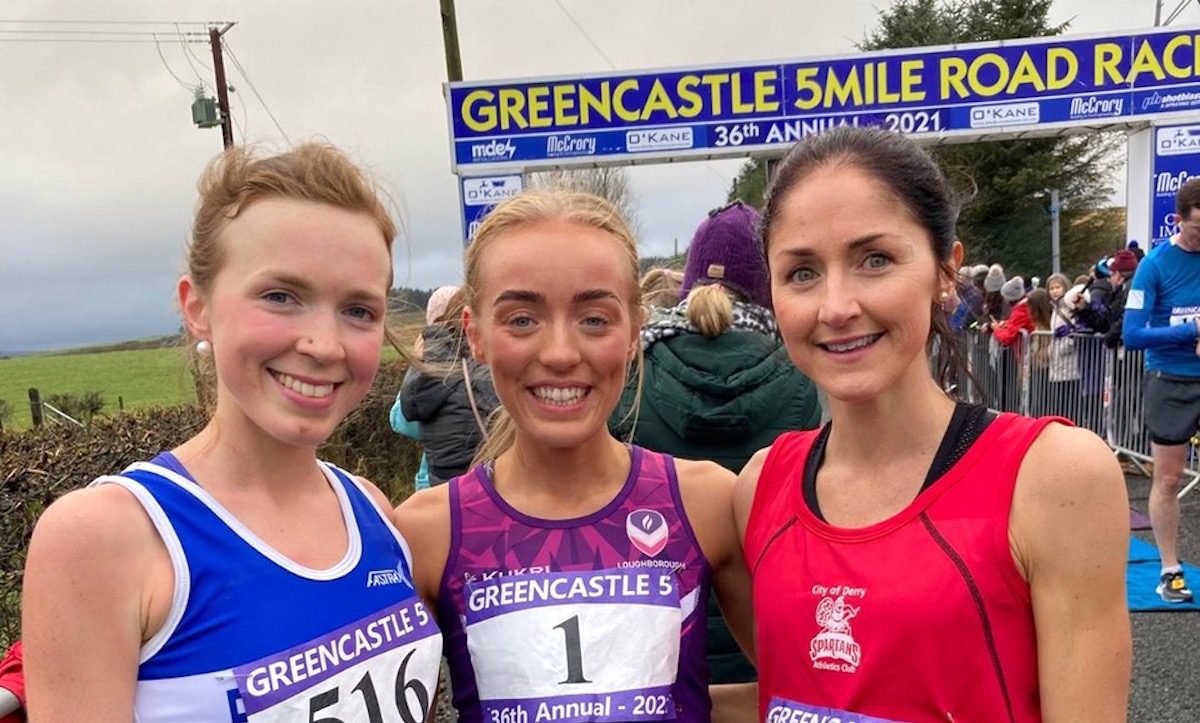 Such is the health of endurance sport in Ireland, decent events are occurring every weekend of the year, where possible. Lindie Naughton, as always, reports.

***In case you missed it, catch up on the wonderful interview with the inspirational Sarahjane Cooke from last week****

As is his wont, marathon man Mick Clohisey of Raheny Shamrock headed west on St Stephen’s Day (Sunday December 26) where he led home an entry of over a thousand at the Fields of Athenry 10km – the biggest road race of the day.

Clohisey’s time of 30 mins 45 secs gave him a comfortable victory over two Craughwell athletes – Jamie Fallon, who was second in 31:13 after sticking with Clohisey until the halfway point, and William Fitzgerald third in 31:26.

Class of the women’s field was Aoife Kilgallon of Sligo AC, who finished in an eye-catching time of 33:49. Kate Kelly of Athlone RC was second woman in 37:01 and Catherine Thornton of Crusaders AC in Dublin third in 37:24.

The race was one of many taking place on St Stephen’s Day (Sunday December 26), with the weather (mostly) a big improvement on the downpours of Christmas Day.

Not going down without a fight

Fastest 10km time of the weekend came from Ben Branagh of St Malachy’s AC who won the 10km at the Titanic Festival in Belfast in a time of 29 mins 29 secs after leading from the half way point of the race.

Marathon man Stephen Scullion of Clonliffe Harriers also broke the half hour, finishing second in 29:56, while third in 30 minutes exactly was Eskander Turki of Annadale Striders. These three finished two minutes – and more – ahead of the chasers.

First woman in 38:34 was Gillian McCrory of St Peter’s AC. She was followed home by Niamh Donnelly of Armagh AC in 39:10 and Fiona McFall of Roadrunners AC in 39:28.

Winners of the 5km were Gerard Heaney of North Belfast Harriers in 15:36 and Margaret Flyn in 17:47.

Over five hundred turned out for the 36th annual Greencastle 5-Mile in the foothills of the Sperrin mountains in Co Tyrone, where Conor Maguire was the winner in a time of 24 mins 53 seconds. Second in 25:07 was Conán McCaughey of North Belfast Harries while third in 25:28 was Eoin Mullan of Omagh Harriers. Seventh and first junior in 26:59 was Lughaidh Mallon of Lagan Valley AC.

Grace Carson of Mid Ulster AC/Loughborough lived up to her billing when for a second year she finished first woman with a time of 28. The in-form Catherine Whoriskey of City of Derry Spartans AC finished one place behind Carson in 28:34 while Cassie Lagan of Finn Valley AC, home from her American college, was third woman in 32:17.

In Cavan, Conor Duffy of Glaslough AC – who had won at Greencastle a year earlier – won the Cavan Christmas 5km Dash.

His untroubled time of 14 mins 50 secs saw him finish well over a minute clear of the chasers. John Whelan was second in 16:09 and Catherina Mullen of Metro St Brigid’s AC third and first woman in 16: 35. Finishing sixth and second woman in 17:15 was the veteran Denise Toner of Clones AC.

Four miles of fun for all On an ideal day, over 300 runners took part in the 32nd anniversary event. McEvoy was one of a group of six still in contention with a mile to go and a faster kick saw him get the verdict over West Waterford’s David McCarthy, a 3 mins 55 secs miler, by four seconds.

His winning time of 18 mins 44 secs was almost a minute shy of Sean Tobin’s phenomenal 17:45 course record set when the race was last held in 2019.

Kevin Moore of Dundrum AC took third spot in 18:59 with McEvoy’s Kilkenny clubmate Brian Maher showing a remarkable comeback from injury to finish fourth in 19:00, a second faster than his winning time at the race three year ago. Now 44, Maher’s last race was the National 10,000m in 2020.

Dymhna Ryan of Dundrum was first of the women, her time of 21:56 faster than Siobhan O’Doherty’s winning times from the two previous editions of the race.

Ciara O’Neill, a reserve for the Irish U23 team at the recent Euroopean Cross-Country Championships, took second place in 23:13. Prolific marathoner Angela McCann of the promoting club – now in the F50 category – finished third in 23:28.

Another outstanding masters’ performance came from Joe Gough of West Waterford, winner of the M65 age-group in 25:21.

A kick for the line

A chase for the line at the Streets of Wicklow 5km saw Tudor Moldovan of Clonliffe Harriers just holding off Ashford AC’s junior athlete Jonas Stafford for victory in a time of 15 mins 28 secs.

Stafford was just a second behind, with Gareth Murran of Sportsworld AC third in 16 mins 4 secs.

First woman in 17:19 was Sheila O’Byrne of Parnell AC. Claragh Keane of DMP AC was second and first junior in 18:36 and Ava Martin of local club Inbhear Dee AC third and second junior in 18:59.

Families were out in force, among them the well-named Foot family, the Sheeran Purcells, the McElhinneys, the Anderson Ludlows, the O’Sullivans, the O’Briens, the O’Dwyers, and the Coxes.

Paul Mitchell of Tullamore Harriers was the winenr of the Kilbeggan St Stephen’s Day 6km in a time of 18 mins 53 secs. Matthew Glennonr finished second in 19:05 andf Michael Murphy, another Tullmoare Harriers athlete, third in 19:19. Finishing 16th and first woman was Nadine Donegan of Tullalmore Harriers in 22 minutes exactly.

Tullamore legend Pauline Curley, now running in the over 50 age group, was just 18 seconds adrift for second place, with Joan Flynn of Mulligan Harriers third and first W40 in 22.44.