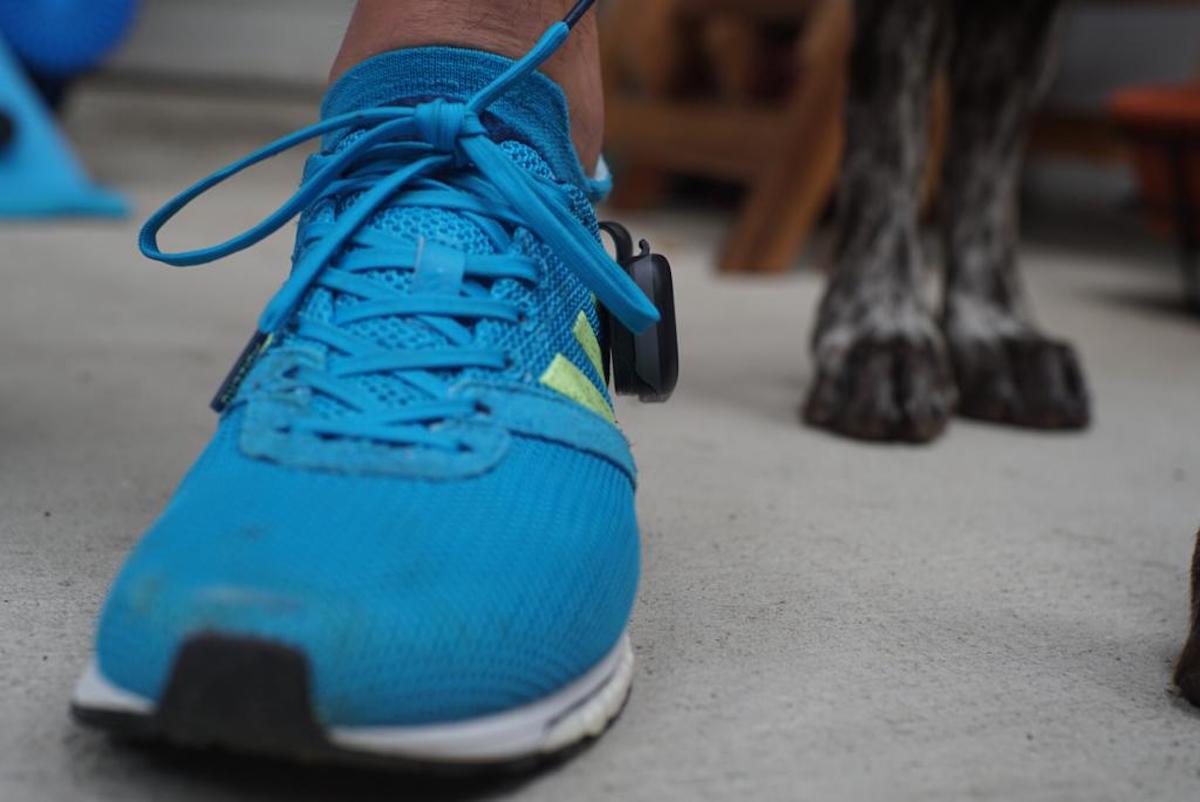 A few months ago the opportunity arose to review some of the newest, fancy tech devices to come into running, the Nurvv run system. Fast Running’s Robbie Britton got involved.

As someone who’s been working on a long term injury, and more recently with my friend Paul Tierney on trying to improve how the bones/joints of the foot articulate so that the rest of my movement can positively benefit, it seemed a no-brainer to try out these gadgets to see if the work we was doing was changing anything.

Not only that, but a we got a free pair to test and they normally retail at £250 so it felt like a good swap for the time to test and review the products, especially if they helped me out in the meantime.

So what is it?

The Nurvv is a couple of insoles that go underneath your normal insoles, that attach to a sensor on the side of your shoe.

There’s 16 sensors in each insole and it links to an app on your phone, with certain watches and just records itself so you can upload and review your metrics afterwards.

If you’re an over-pronator, heel striker or front foot runner, the insoles will show you what they actually looks like across your run, different terrains and as you fatigue as well.

So I imagined it would be super insightful to see what it said about my feet, which Paul and I had found did very little in the way of pronation, even with my super high arch that just likes to stay where it is all the time.

“Your foot might as well be made out of concrete” was how Tierney worded it. If you’re interested in our stylish tiles then you need to buy an old flat in Northern Italy. Also legs had been shaved for aerodynamic gains in an 1000km bike race and I don’t think it helped. Don’t judge me.

How it worked in action

The kit is all pretty self-explanatory but the instructions show you how to fit the sensor to the side of the shoe and how to secure onto thinner walled shoes too.

Syncing to your phone is also pretty easy and soon you’re ready to go.   If, like me, you don’t actually run with your phone then you need to look into the traffic light system to tell you when they’re ready, as it’s your only guide.   The sensors record your GPS location too so could be used instead of a watch in that regard, but it means waiting until they’re ready, which is easy to see with the phone, but not impossible without.

The Nurvv website informs us that the sensors are a lightweight 22g, which isn’t much to add onto your shoes, but it’s unclear if this is the insole unit or the unit on the side of your shoe as my set, for a UK size 9, adds up to 69g per foot.

Is the weight a big deal?

Now 60-70g isn’t a huge amount I hear you say, but if you’re in 250g training kicks then it’s nearly a 30% increase to each shoe. Mine are generally lighter shoes too so the percentage difference increases.

Personally, I’m very unlikely to add this kind of weight to each shoe when racing, which unfortunately removes one aspect of usefulness for the Nurvv for me.

Seeing how my gait changes in a race effort would be fascinating, but that kind of addition could realistically affect your performance.   For faster training sessions, well if they slow you down a little that’s no bother really as it’s only training.

Up to you to think about the balance between the value in the metrics and the extra weight.

There is however the issue of whether a 30% increase in weight per shoe would change your gait in the first place. If this is actually more at the rear of the shoe too, where the recording units are, then could this have an impact? I don’t know.

The first time I wore the sensors I noticed one thing straight away: I was up on the balls of my feet more than normal.

Just knowing that my gait was being analysed on every step made me change something.   Even as someone trying to be aware of this and trying to stay relaxed and normal, I couldn’t help myself.

Then there was a blister that occurred within about 30 minutes of the session on my right heel. I doubled checked afterwards for the fit and it was correct and it didn’t affect me in any other shoes, but my Adidas Adios didn’t like them. Or more specifically, my heel didn’t like them paired with the Adi.

Other than the blister though, you don’t really notice them in your shoes and changing from shoe to shoe is easy enough. What did they tell me?

So the data and feedback from using the sensors was something I was really excited about. Having spent time trying to “re-educate” my feet a little, I wanted to see if there was some pronation going on.

Pronation was going on, more with my left than the right, which is one of the reasons I have had long term issues with my right lateral chain. Cheers Nurvv.

How about my foot strikes? Well the sole of every shoe I’ve ever owned can tell you that with it’s faded tread on the heel, but the sensors confirmed what I already knew there.

The feedback and the advice from the app was okay, if a little generic. How much do you want from an app though?

What’s good to see is that there isn’t any “X is bad and you should change it” messages in there.  With foot strike, cadence and pronation we are all a bit different and if you’re not injured and you’re running well then nothing might need changing.

After the initial excitement?

For the first few runs there was actual excitement to download the data and see what came out.

Testing different shoes, different terrain, gradient and pace all brought out similar results but was interesting none the less.   Pretty soon the extra hassle of swapping shoes or the thought of adding time onto my intervals with the extra weight didn’t seem worth the trouble.

Maybe a one off use if I were trying to improve something, but beyond that they’re not getting much use.

So do you need a set of Nurvv sensors? Not really. A nice to have sure, but I can’t see people using these long term, as the makers seem to target.   Could they be useful for someone working with a physiotherapist remotely? Maybe, but so could a slow motion video you take on your phone and send to them. If you’re not changing how you run to adapt to the sensors and extra weight then maybe there is some usual data looking at how you run and how that changes over time with fatigue, but not every run and certainly not in a race.

A good physiotherapist or coach can eyeball a lot of what the gadget is telling you, plus if you use one of the apps like Hudl to take a slow motion video yourself then you can see a lot there too, for a lot less.

So thanks to Nurvv for letting us test our your product, it’s pretty neat and does it’s job pretty well, but ultimately I think a wiser investment of your money would be with a well recommended physiotherapist or knowledgable people in gait analysis like Profeet Custom or the big man Paul Tierney himself.

Robbie Britton is a coach, 2:29 marathoner and ultra runner who’s run 261km in a single day, so he does a lot of running. It makes senses to get him to review some products on some of those miles.