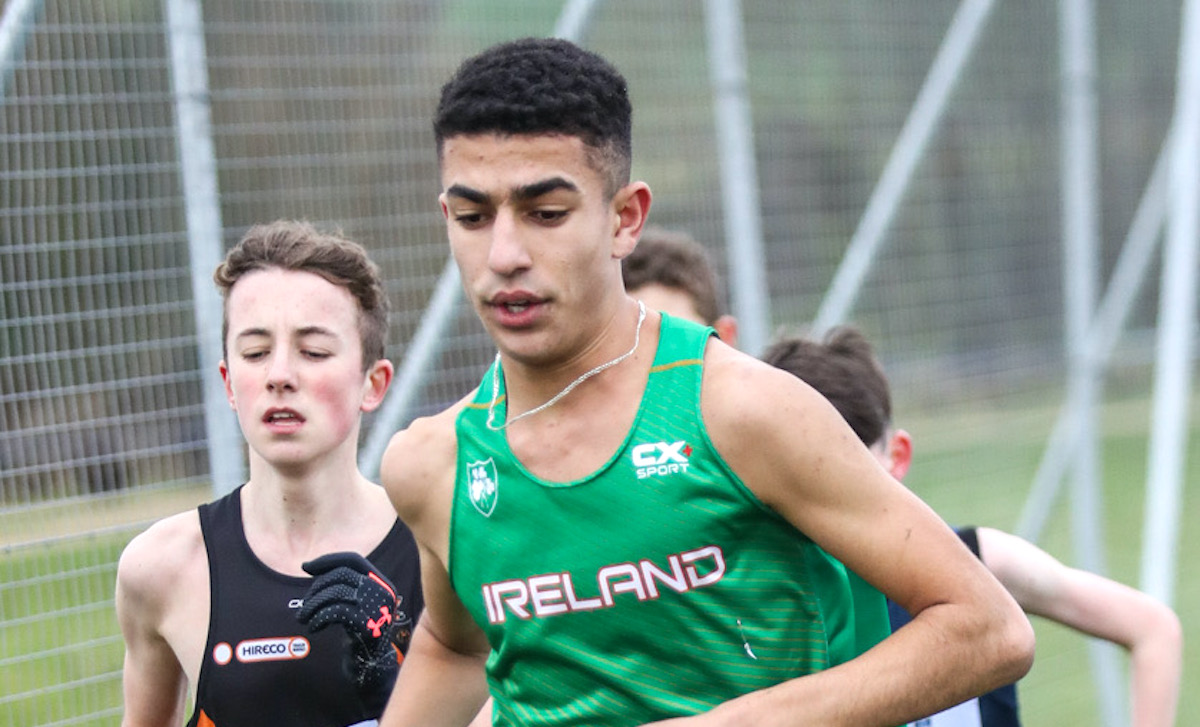 Young Irish star Abdel Laadjel has signed a full scholarship for Division One Providence College in the US and shares his excitement with Fast Running.

The All-Ireland Schools Cross Country championship back in March might seem like a lifetime away this year, but for Donore Harrier Laadjel it was a chance to showcase his hardworking and determination for the future. Winning the intermediate boys race by a clear margin.

Abdel is 17 years old, grew up in Lucan and attends Kishoge community college, but only in more recent years did his focus shift from football (soccer, in case we have any US readers) to running.

“He was born in Dublin in 2003 and was a football fanatic in his earlier years, only taking up running through his school Kishogue Community College which is based in Lucan,” Fast Running’s Lindie Naughton tells us.

“When he finished fourth at the West Dublin Cross-Country in the Phoenix Park in January 2017, he was approached by Gerry Naughton (no relation) and invited to join Donore Harriers, one of Ireland’s oldest clubs, which is based beside the park.”

What it means to Abdel?

“Getting a scholarship to Providence College is a honour,” said the young endurance athlete. “It’s crazy thinking I’ll be going to the same college that previous Irish legends like John Treacy and Mark Carroll went to.

I can’t wait to take my academics and athletics to the next level under the guidance of one the greatest college coaches Ray Treacy, who has produced a lot of great runners and Olympians . I as well want to be remembered side by side as one of the greatest Irish one day. This is only the beginning.”

The cross country and track starlet has big dreams and isn’t afraid to speak about them. “I’ve always been the guy to set my dreams into goals in my mind.”

“I definitely want to do really well in the NCAA and European cross country next few years, progressing well. But the end goal for me is definitely to make the Olympics and World Champs,” said Laadjel.

He’s not stopping there though and hopes to “also maybe racking up major medals for Ireland. A few Irish records maybe in my bag. I just have to see what the future holds, life changes fast.” Big hopes for the future, but with the talent and work ethic to make it happen. The impact of COVID

As a Muslim athlete there are other challenges within the year too, such as fasting during Ramadan, but the focus is clearly on the positives.

“Ramadan came around, which I had to fast for a month, so I chose to take six weeks off. But I think I needed that time off and I came back for summer and came 2nd in National juniors which I was happy about. It might have been a blessing in disguise.”

Laadjel was at the lower end of the age bracket for the National Juniors, but ran an excellent 8:39 for the 3000m to finish second. The down time over the summer clearly didn’t affect his leg speed too heavily.

It’s clear that Laadjel knows that a great support team can make all the difference in our sport. “My coach Gerry Naughton was the one to see potential in me that no one else would have seen. He really has coached me to becoming a good athlete and been a second dad to me.”

Yet it’s not just the importance of the coach, but teammates and the theme of the running family is clear from talking to the athlete. “Ciaran O’Flaherty came on in the past year coaching us, the group of lads, too in the past year and has a mad a huge difference.

“I also can’t forget Lee Van Haeften who I started off going to at the start for physiotherapy as he is a physio and a Donore athlete but he quickly became my mentor and big brother since then and really drilled in my head that running is all about being consistent.”

“Also all everyone who does the works in the background in Donore, thank you too all them. Donore Harriers is truly like a big family.”

So it’s exciting to see what the future holds for young Abdel Laadjel, over in the US, but also performing at a European and International level for Ireland. It seems that there is a wise head on those young, fast shoulders.

With thanks to Conor O’Heare for his input and for highlighting the story to FastRunning in the first place. If you know of any stories that should feature in our pages then please do email team@fastrunning.com