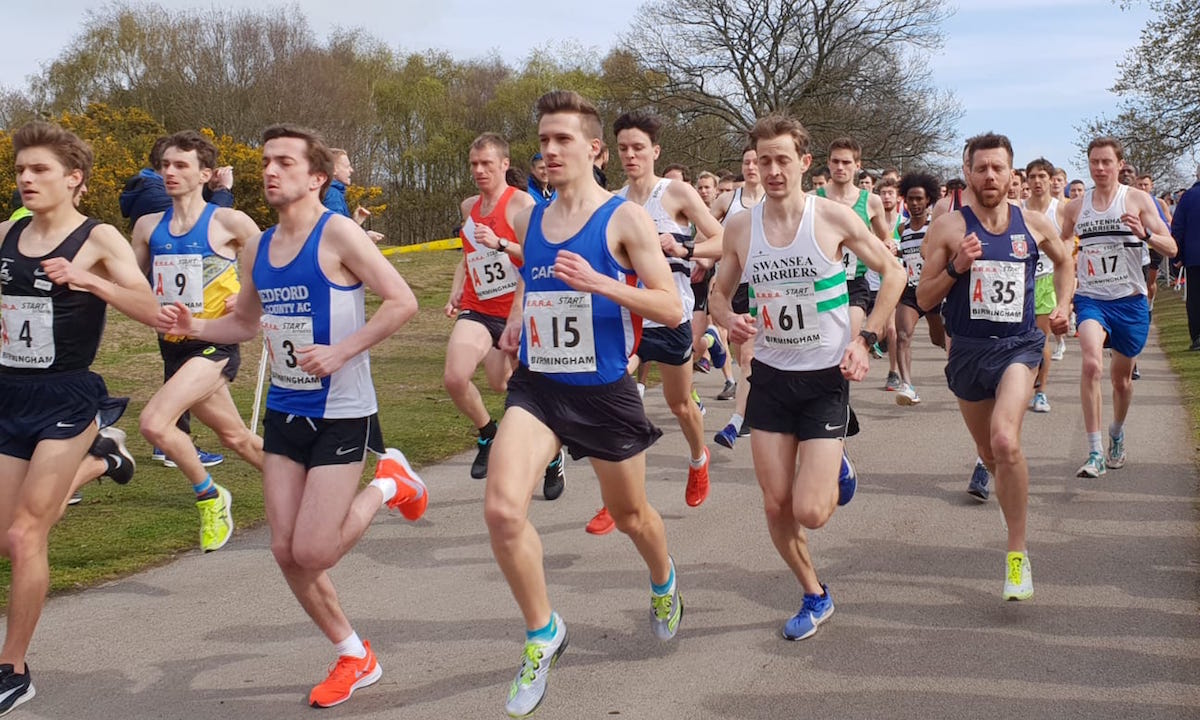 The Road Relays are at the beating heart of British club running scene. James Thie reflects on the great Cardiff AAC victory from 1999 as the team get together 20 years on.

The crowd lean over the barriers and Bud Baldaro’s recognisable tones informs everyone that the winning team is on the final climb to the finish. It is the blue, red and white of Cardiff AAC and the athlete with this honour is Christian Stephenson.

Anyone in the know of the 1990s running scene has respect for Chris or ‘Snappy’ as he’s known to his teammates. These teammates are going wild on the side-lines and Christian does his best ‘airplane’ impression for most of the final 200m! His time is 16:28 and is the fastest of the day, this is a moment of enjoyment, but still ‘what if’ or ‘how fast’ he could have run if he had to! Fast forward 20 years and 3 days and we are back together as a team. We are minus a few, some are unable to make it, but a great chance to catch-up, chat and remember some funny stories from the past. This got me thinking about that amazing day, but also what we ended up achieving in running and where we are now.

The one thing that stands out straight away is how much we wanted to win that day, and how much we talked about it in the months before. This was not luck or chance but a planned, calculated attempt at doing something our club had not done before, and we did it … but how … ? How it played out leg by leg

Myself playing the youngster! Well, in the team, I was by comparison aged only 21, and felt privileged and pressured that they trusted me the first leg. That summer, I was 5th in the British senior 1500m World Trials after taking bronze indoors, so I was used to producing on the big day, plus I had a bit of speed to be in the mix if needed.

The aim was to be as close to the top 10 as possible on the always ‘loaded’ first leg and hopefully within 20-30 seconds of the lead. I don’t remember much of the race, but I knew I was around the big teams that would be in the final mix as I out kicked Paul Freary (Belgrave) and was closing in on Ian Pierce (Tipton) to cross in 14th place, with 17:20, 32secs off Birchfield’s Matt Clarkson in pole position.

Andres Jones is a cracking athlete to have on the 2nd leg, as he was just a few months away from a massive breakthrough in the summer of 2000 when he runs an incredible 90 second personal best to hit the Olympic 10000m standard with 28.00.

He also won the 5000m trials, in a real purple path that season. 17:11 on this stage cuts through 10 places into 4th and only four seconds off the black vests of Birchfield. It was a great run by Andres who now resides in North Wales as a driving instructor which doesn’t surprise me. He was always calm and cool and I’m sure he still is! Unfortunately he was not able to make the reunion.

Richie ‘Dickie’ Gardner is now a high ranking policeman and doing great things alongside his wife at his local athletics club, Aberdare AC. He has a 2:18 marathon best and gold at the Commonwealth trial running championships (with today’s teammate Nat Lane in Silver), but say’s eight minute miles are tough at 45 years young, but he is still racing, as I am sure he always will!

So on the third leg he was right in the mix of the race taking over in 4th place and battling to a 17:35 leg split with just Tipton’s Matt Smith edging past. But up front, Darrius Burrows, another 90’s ‘super talent’, cracks round in 16:51 and extends the stage lead at the half way point.

Next up, one of those people in life who is fascinating to know … an enigma ‘on’ and ‘off’ the track (but he is away in Vienna during the reunion – keeping his mystery alive!). Nicky Commerford is an art teacher who on that day helped to create the canvas for the Cardiff AAC masterpiece!

This is no surprise to those in the know as Nicky is a 3:42 1500m athlete who went on to represent Great Britain in major international cross-country championships and is equally strong on the road. A 17:02 leg took us back past Tipton’s Mick Hill and up to 2nd place but still 22 second behind Birchfield…there was still work to be done.

Nat Lane is the brains and the hard worker who got us all together for the reunion. A super smart guy who works in law, and is one of the nicest people you could hope to meet. Nice off the track, but ruthless when a shift is needed on it, and will still make himself available for relays.

Going into this leg he had personal bests of 13:58 for 5km and 29:01 for 10km, so a huge runner to have on the penultimate stage of the race. Nat runs 17:10 and goes past Birchfield but it’s the super human leg of 16:44 by Nick Jones of Tipton that keeps Cardiff off the top spot. The green and white hooped vests had a 26 second on us….but was that enough?

Christian ‘Snappy’ Stephenson takes over, his nickname not given as some think for his often bluntness (he always said what he thought!) but for his stature when younger when it was thought he may ‘snap’ in the wind! He is not going to snap now…he is a flanker in his local rugby side and loving his work as a school caretaker, a great job for someone I always knew as super reliable and practical.

This athlete in 1999 was strong and one Britain’s best on any surface. As UK steeplechase champion he was to front run that summer 8:25 in the Solihull BMC to earn his Olympic berth. To have him as your friend and training partner (twice a day, almost every day for 2 years) is the best apprenticeship I could ever have wished for. He had everything, speed 22/23’s 200’s at the end of sessions, and strength where he could float over the grass and uphill like few I’ve seen since.

The past and present

At the reunion, I remind him of the one time I managed to drop him, when we ran up the big hill to my university halls of residence. He stormed in my room, grabbed his stuff without eye contact and said ‘same place, same time tomorrow’…what had I done!

The next day Chris says nothing, and we set off on the same run, but this time we are shifting in pace from the start. Faster, faster and a bit more and we hit a similar hill … bang he goes, and flies up. He stands there waiting at the top until I finally reach him.

He looks me in the eye and says ‘never try and drop me again, as if you do, it will come back 10 times’! He was right, it was a vital lesson and I still remind myself of that when I see athletes racing in training.

The speed I witnessed up that hill had the same intensity and powerful strides that I could see flying towards me, just 50m from the National 6 stage finishing line. The team sprint to the finishing line enjoying the moment together as a real team…we did it, and we won it! Scott Olson was willing to travel as reserve that day and even though he was not needed he was a young athlete that was inspired to take on a US scholarship and continue his athletic development. Now a well-respected electrician in Cardiff, he remembers fondly being part of that team.

We did think that day that we would or could rule for a number of years. But as every club knows in relation to 6 and 12 stage relays, getting your best team out rarely happens and if it does, you must celebrate. The next year the same team was ready a week out, but Andres was sadly involved in a car crash, and the team had to wait until 2001 to pick up bronze medals. A few near 12 stage misses with medals but no titles and the original super 6 are gone and replaced. I do though feel proud that I coached many of the next generation of Cardiff runners to take back the title in 2016, including Tom Marshall and his ‘milers’ sprint finish that day. A leg of the B team for myself, was a footnote in another great day for the club.

Then and up to present year and the 2019 relays, and leg 5, sees Cardiff phenomenon Jake Smith flying up the hill towards the line, in the lead! The last leg runner…yes yours truly, but this time there are no fairy tales, I’m the only guy available and even with a World masters gold in March, combined with Snowdon marathon training, there is not enough magic left in the old legs to hold on.

4th is our finishing placing, and I feel it is a fitting time to unofficially retire from the 6 stage, as hopefully I’m never needed or wanted again in the A team! Jake Smith in background and coach Thie in 2019.

But as we sink our beers and eat poppadums’ at the reunion, I’m happy and content and not sad it’s over. I just feel privileged to have been part of that top team in ‘99! Author James Thie, who went on to make World, European and Commonwealth games finals, is now Director of Athletics at Cardiff Met and a respected endurance coach.

Coaching – Art or Science?
Aoife Cooke is just getting started