An adventure in your own backyard 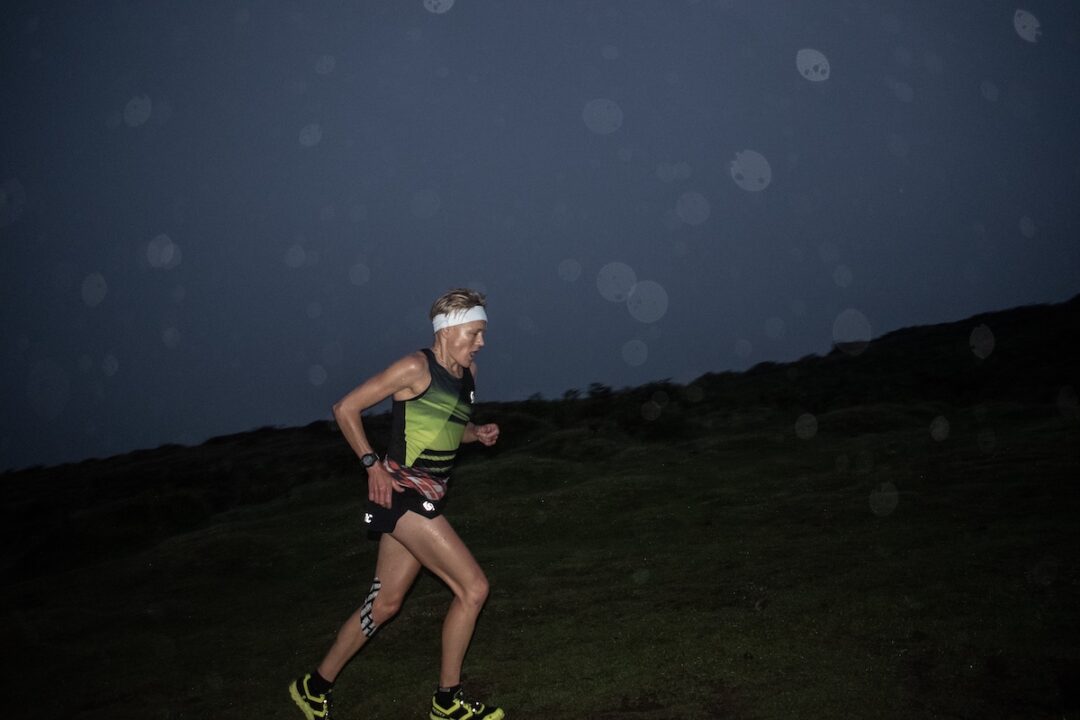 Meek, a GB international trail runner, said she “only heard about it because Patrick Devine-Wright and Tim Lenton ran it on the summer solstice.”

Jenkins, who originally ran it on the eve of the Millennium, with all the hours of darkness that involves, had set a time of 18 hours. This summer it wasn’t just Devine-Wright and Lenton who took on the challenge, but also Andy Connor, who ran 16:11:09 on the 18th July.

Meek planned to run the fastest known time, for male or female. There’s no messing around from the physiotherapist, also known as the Running Squirrel. At the finish the clock read 14 hours 29 minutes and 38 seconds. Whoosh!

“For me it’s about inspiring others to try it too,” said the ultra runner when speaking to Fast Running. “I wanted to talk about it beforehand too, mention my goals, as you shouldn’t be afraid to fail. Failing publicly is fine. It’s the effort that counts.”

Love where you live

So why the Nigel Jenkins Round and why this Summer? “I love where I live and I want others to know just how great some of the running on Dartmoor really is”.

With the disruption to races this Summer it left Meek without many options, but the lockdown rules also helped open her eyes to the opportunities close to home.

“The lockdown just meant I was able to explore my local area even more. With my husband Jon we got out onto the route for some bigger days. When the running was quick Jon had to work to keep up, but when we hiked uphill it was the other way round.”

Many runners will relate to how Meek really got to know her local trails, although maybe not as meticulously and with as much military precision.

“Jon asked if the Dartmoor map would ever leave our living room floor” laughs the running squirrel. “The logistics were meticulous and Dartmoor starts to haunt your dreams. I was sleepwalking and talking about the best way to go around certain Tors”.

Fine weather on the day…

When planning an FKT one might imagine part of the beauty is being able to move start times with the weather. Yet when you get a date set in stone, get pacers to commit to certain sections and fit it around work and family life, moving things isn’t that simple.

“It doesn’t have the five recognised sections like the Bob Graham,” remembers Meek. ” So you have to organise for pacers to meet you at Tors, or at some of the more remote road crossings. Plus you don’t want people put too far out, unable to get back to their transport.”

“Up until about 24hrs before hand the weather looked great. Then the clag came in.”

For those unaccustomed to the British term “clag”, its the type of low hanging, thick cloud or fog that means you can’t see anything. Even your head torch beam just bounces back into your face and navigation in the clag is a real art form.

“We were getting to Tors and I’d planned to meet Jon there, so started shouting “can anyone hear me, is anyone there?”

Out of the fog a response would come from Jon, but the pace of Meek’s run was causing problems. The curse of being too speedy

As the run was going so well Meek was arriving at points before scheduled pacers had arrived. The cold, foggy weather made have made navigation tricky, but it was ideal for fast, harder effort running.

“I actually lost a couple of pacers on one section. One struggled to keep up and another we just couldn’t find in the fog.” You always know it’s going well when you drop a pacer, just ask Dan Lawson.

“Heading off of one Tor I just went in the wrong direction and came back a minute or so later, where Jon confirmed I had gone wrong.” But no to be defeated the pacers did a phenomenal job and caught up with the record breaking runner.

“In weather like that you can panic or just get a grip”. A strong talking to herself and a determined outlook meant Meek always did the latter. “I said to myself “I’m not going to fail just because it’s a bit misty”.

The records for the Nigel Jenkins Round are good, solid marks, but it’s no surprise Meek could run such a great time. A 2:46 marathon in the past before turning to trail running, the Scott Running athlete has always pushed boundaries when she runs and has victories from across the globe.

But did the lockdown provide some benefits? Apart form highlighting the great trails on her doorstep, Meek thinks another factor was important too.

“Moving to long runs every two weeks, instead of every weekend, meant I could do more faster running. There was still a big run of 3-4 hours, but a fortnight apart.” Not that huge a run considering it was a 14 hour effort for the FKT.

“I was able to taper properly too. I backed off the volume, but kept similar intensity. It’s something I’ve done badly in the past, but felt like it went really well this time.”

So respecting the time between long runs and the taper meant Meek could get to the start line feeling fresh. The longer your race, the more important that can be. Continuing the theme of local trails and adventures, when pushed Meek does mention a future ambition. It shows there really inset any fear about dreaming big.

“I’d love to have a crack at the South West Coast Path at some stage. It’s a bit epic though”.

We reckon Damo Hall should consider this a warning, because his FKT of  10 days 15 hours and 18 minutes would certainly be in danger.

Want to read more then check out Jo’s blog on her own website.

Heel striking makes little difference to marathon
Down, but not out