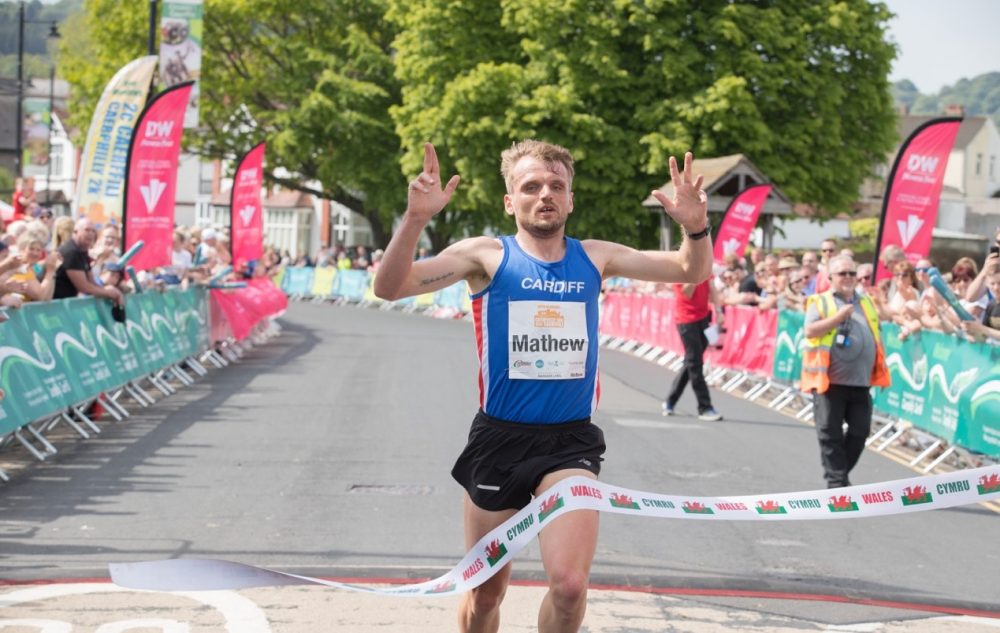 The Welsh runner bounced back from his marathon debut disappointment with a course record in Caerphilly.

Matt Clowes revised the course record at the Caerphilly 10k on Sunday (20 May) running a strong 30:33 on the hilly course.

Nearly 2,000 runners took to the streets of Caerphilly for the 2018 Bryn Meadows Caerphilly 10k.

The race had moved from a regular June date, but still enjoyed scorching temperatures as the runners weaved their way around an undulating loop of the medieval town.

At the 3k mark, the course team reported that Clowes already had a lead of around 60 metres and at 8:56 was on record to smash the previous best of 31:04, and perhaps dip under the elusive 30-minute barrier.

Similarly, the 5km mark was passed just seconds under 15 minutes but the route’s main climb was still to come. Clowes was indeed the first runner to appear charging downhill towards the finish on Crescent Road, stopping the clock in 30:33 and recording a new course record.

“This is a great event and I was happy to run that,” said the modest Cardiff AAC man. “The hill near the end was really tough but that time here is fine. I live 20 minutes down the road so to come here and get this done is ideal.”

After losing a bet with his other half that he could run under 2:15 at the London Marathon this year it’s good to see the Welshman back on form.

Next home was Teweldebrhan, unable to retain his title but still happy to finish on the podium as the runner-up. Phil Matthews held off Owain Jones to finish third in the white and green of Swansea Harriers.

Racing at the Sharpe end The ladies race saw Helen Sharpe of Fife AC live up to her pre-race favourite promise, winning in 37:04.

Cardiff AAC’s Lucy Marland had shared the pre-race favourite tag and stormed home in second place with a customary smile on her face. Claire Jacobs of Cardiff club Les Croupiers was the third lady back.

Sharpe spoke kindly of the event saying: “It was very warm but the crowds were great and I really enjoyed it. I was pleased to win here, it had a big race feel.”