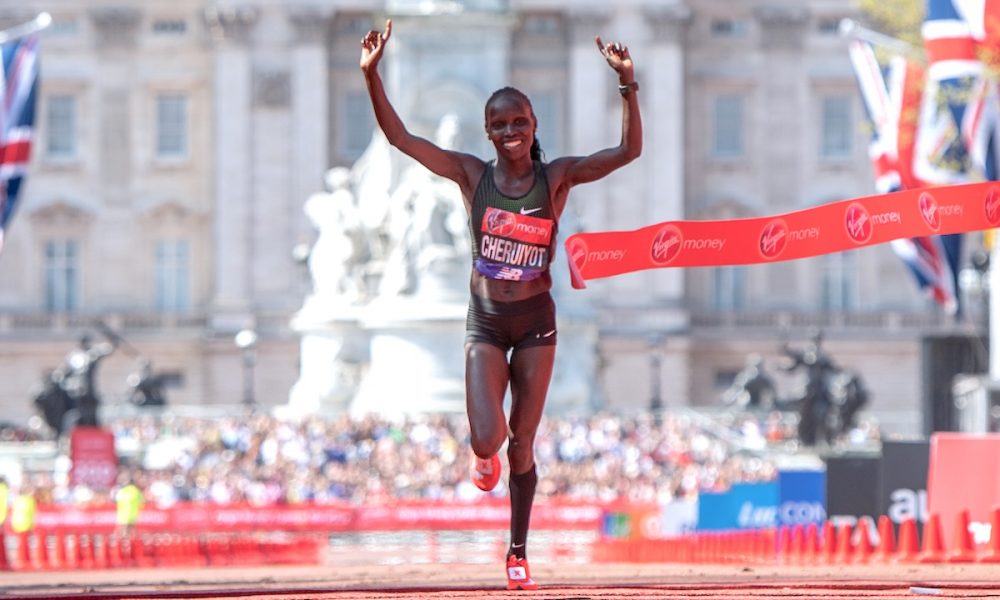 Vivian Cheruiyot was the surprise winner of the women’s crown, as Mary Keitany and Tirunesh Dibaba both faded in their attempts to break Paula Radcliffe’s record.

Cheruiyot, the Olympic 5000m champion crossed the line in 2:18:31 to become the fourth fastest woman of all time.

Keitany and Tirunesh Diababa ran the early parts of race tucked in behind the male pacemakers before the defending London Marathon champion made a decisive move at around the 10-mile mark and started to pull away on Diababa.

Still on the heels of the pacemakers, Keitany, who set the women’s only world record last year, had a 23-second lead at halfway, going through in 67:16 and on track for Radcliffe’s 2:15:25 mixed world record.

The gap grew further and by 25km the three-time New York City Marathon champion had a 29-second lead going through in 80:24.

Diababa was a casualty of the early pace and dropped out around the 30km mark. With about 5 miles to go Keitany was struggling herself and lost the lead to Cheruiyot, who ran her first marathon in London last year.

It was the 34 year-old’s race to lose from that point and she powered home to win by almost two minutes.

Keitany bravely battled through the pain to take fifth in 2:24:27.

Lily Partridge ran a big PB to finish eighth overall in 2:29:24 and the first British runner home ahead of Tracy Barlow in ninth, who clocked 2:32:09. Debutant Rebecca Murray was the third British athlete finishing 12th overall in 2:39:37.

“The reason it was so good for me today was because I started slowly; I didn’t go with the faster group because the faster group was quicker than I was at the start. Then I came slowly. I didn’t want to race against anybody, I wanted to race alone.

“So I raced like that. When I was in the 5K I saw Dibaba, and I had enough energy that I thought ‘I’m going to get her.’ After that, I saw Mary, and I got her, and I thought ‘yes, today I am going to be a winner of the London Marathon’ and I’m so happy.”

A detailed report on the British elites and club runners can be found here.