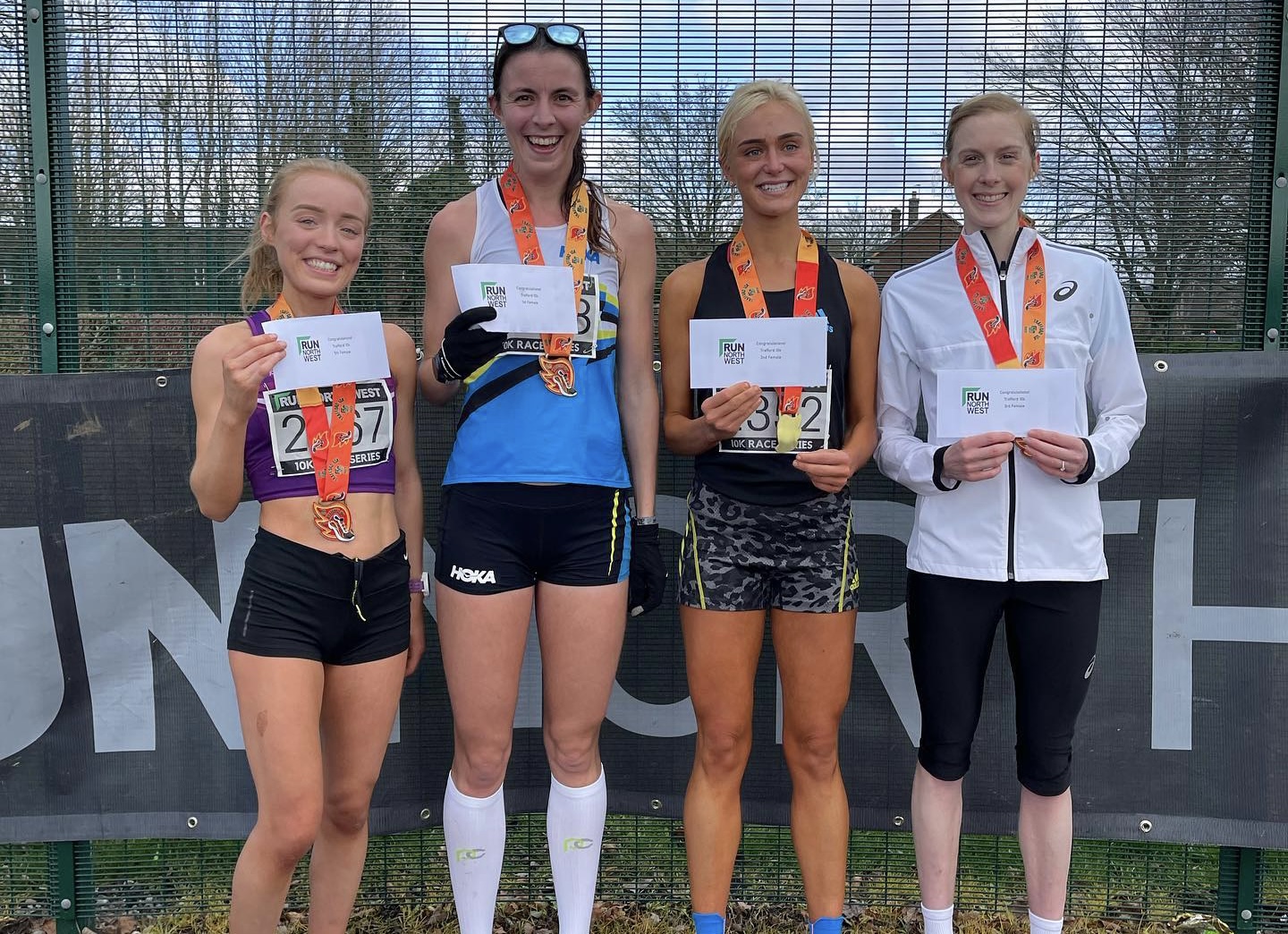 It is often quite a dilemma deciding where to start these articles, especially at this time of year when there is so much happening on the track, road and cross country. It is a bit easier this week, however, thanks to the fantastic results from the Trafford 10k. The race is a fixture in the UK racing calendar the team at Run North West delivered again and were blessed with superb racing conditions.

Judd claims victory on a day of stunning performances

I do not have enough superlatives to describe the performances in the women’s race, so I will just get straight to the results. In her first race since her half marathon debut in January, Jess Judd took a sensational victory in 31:06, a time that moves her to fourth on the British all-time rankings behind Paula Radcliffe, Liz McColgan and Eilish McColgan. It is also a 32 second PB for the Blackburn athlete and faster than the Tokyo Olympian’s best over the distance on the track.

She was not the only athlete to have a superb race, with Samantha Harrison (31:11) taking almost a minute off her previous best 10k in her first race of the year for second. The good form shown last year, which included PBs across distances on the road and track, is clearly continuing.

The top-three was completed by Charlotte Arter (31:26) who improved her own Welsh Record by two seconds in the process.

Grace Carson predicted a stunning performance to run 32:45 as an under 23 to finish 4th and Anna Bracegirdle was 5th with a huge PB top run 32:52 as she builds to what is shaping up to be a fantastic women’s race at Manchester Marathon.

A shout out also to Kirsty Longley, who’s 34:30 is the fastest by a V45 athlete in 32 years and moves her to second on the UK V45 list behind Priscilla Welsh.

It was the Birchfield Harrier’s first race since November and saw him rewarded with a 19 second PB. It would be remis also to not mention fourth placer Lucian Allison who recorded a 28 second lifetime best (28:38). In form Lewis Jagger ran a fine PB to clock 29:03 for 5th.

The superb depth of performances is demonstrated by the fact that a total of 21 men ran under 30 minutes, and a further 21 finished in under 31 minutes. One of those was John Gilbert, his 29:56 a 49 second PB that moves him to ninth on the UK V40 all-time list. Trafford was not the only venue witnessing fast times, with a plethora of races over 13.1 miles this weekend bringing some excellent performances.

In total, 16 athletes finishing in under 70 minutes at the Cambridge Half Marathon.

A fantastic run provided Tonbridge’s Lucy Reid (71:15) with the win, a 63 second margin of victory and a 93 second improvement on her previous best. Behind her, Georgina Schwiening had an equally superb outing, her 72:18 taking over three minutes off her official PB (but the Cambridge and Coleridge athlete did clock a 71 minute time on the 51m short course at Antrim in August).

The top three was rounded out by a rather unexpected entry, 1500m specialist Holly Archer in her debut over the distance. Just one week after taking bronze over 1500m at the British Indoor Championships, the local athlete crossed the line in an impressive 73:20.

Reid and Scheiwing are on the start list for Manchester Marathon alongside a group of other women in fine current form including Anna Bracegirdle after her big 10k PB today, Naomi Mitchell alert her fantastic half PB last weekend, Calli Thackery who has been consistently fine form.

The start list also includes Rose Harvey after her stunning 2:27 in Seville it remains to be seen if she will run. What is clear is that the European Championship and Commonwealth Games marathon trial in Manchester will see some very competitive racing.

Big PB for Bester as he claims victory

The top two male finishers also set considerable PBs, with Nick Bester (66:19) and Christopher Thomas (66:30) improving by over two minutes and 90 seconds respectively (the latter just a week after running the English National XC). Third place went to Alex Milne (66:39), who may not have left with a PB but was over a minute faster than at last weekend’s Wokingham Half Marathon.

A sprint finish at the Surrey Half Marathon saw Craig Ruddy just get the better of Stephen Blake, with the pair crossing the line in 68:25 and 68:26 respectively, with Chris Powner (69:31) rounding out the podium. The course around the Woking countryside is not the flattest meaning no PBs for the top three, although Powner’s performance was only his third race since 2017.

A 72 second PB, however, saw Emma Styles (75:08) record a commanding victory as she crossed the line over four minutes ahead of Josie Hinton (79:09) and Cordelia Parker (79:37), both of whom also recorded their fastest ever half marathons. An associated 5k went to Anastasia Hounslow (18:47) and Benjamin Warren (16:02).

In his half marathon debut, Abed Teweldebrhan (67:43) finished over a minute ahead of the rest of the field at the Newport Half Marathon, showing his abilities over a range of distances with his previous race an indoor 3000m! George King was 2nd with 69:03. It was just three seconds, however, that separated Elizabeth Dimond (81:04) from second placed Rachel Doherty amongst the women.

Staying in Wales and to the Jones O Gymru Anglesey Half Marathon, where Lauren Cooper (78:43) and Adam Jones (71:25) recorded victories.

I hope you have not got tired of 13.1 miles results yet, because there’s still a few more to go yet! The title of fastest-of-the-rest goes to the Bideford Half Marathon and Ronnie Richmond thanks to his 66:49 showing. Kate Dren (78:12) was the fastest female, with the top four all running under 70 minutes.

Staying in the south and the Eastbourne Half Marathon; Carole Coulon (88:13) and Ross Brocklehurst (78:30) were quickest at the seaside town, and Crispian Bloomfield (71:08) and Stephanie Migliorini (85:15) were the same, just without the seaside venue, at the Chelmsford Half Marathon.

I would bring you the winner of the associated Chelmsford 10k, but they are currently down as “Unknown Participant 5189”. The mystery runner had a good outing though, recording 31:07 and finishing over two minutes ahead of the rest of the field.

The Essex 20 hosted the inter-counties 20 mile race. Pete Robinson of Springfield Striders and Essex took the win for the men in 1:45:52 with Ellie Monks of Southampton AC and Hampshire the winning woman in 2:06:55.

Elsewhere on the Roads

Starting in the centre of London and the Regents Park 10k organised by Mornington Chasers, where Tom Aldred (33:33) crossed the finish over one minute ahead of anyone else, Sarah Stephens (42:15) doing the same amongst the women.

Times of 33:43 and 39:38 saw Sam Aspinwall of Sale Harriers Manchester and Lymm Runners’ Alison Roberts take wins at the High Legh Robert Moffat Memorial 10k, with 544 athletes taking to the course. Across in Merseyside, the St Helens 10K sponsored by GPW Recruitment went to Matthew Crehan (31:14) and Nicola Jackson (36:22), the latter with a 21 second PB.

In her longest race of the year so far (impressive in a way for the British Record holder over 100 miles), Samantha Amend (2:48:56) took a strong victory at the Running Grand Prix marathon at Oulton Park, where Joe Baker (2:44:20) was quickest overall.

The mention of 100 miles brings us nicely to some of the ultra-runners in action this weekend.

There have been some good British performances at the Trans Gran Canaria races this weekend. Tom Evans took victory over the advanced course, which takes in 62.2km and includes 2,837m of elevation gain, his 5:10:39 seeing him finish almost ten minutes ahead of the rest of the 473 male finishers, 29 of whom were British. Meryl Cooper was best of the 12-strong British women field, finishing 23rd (6:38:37).

Sophie Grant finished in an excellent ninth at the classic distance, completing the 127.9km course in 18:42:18. Dutchwoman Ragna Debats took the honours in 16:00:14. Eighteen British men took to and completed the classic distance, the best being Jonathan Price (18:19:18) with a 43rd place finish overall.

At the Phoenix Track Wars, Sophie Power covered a total of 213.6km over 24 hours, which saw her cover a somewhat ridiculous sounding 267 laps of the track. I feel dizzy just thinking of that.

The indoor action has dropped this week with the World Indoor Championships now less than a fortnight away. At the final World Indoor Tour fixture of the year, Elliot Giles (1:45.43) won the 800m at Wednesday’s Villa de Madrid, in the process winning the overall World Indoor Tour and a wildcard for Belgrade, which opened up a spot in the British team for Charlie Grice. Excluding the tactical heats and final of the British Championships, Eliot’s last three races have been within 0.01s of each other, which is incredible consistency.

This weekend has also seen Lee Valley play host to the British Master’s Indoor Championships, with the longest distances for athletes being 800m and 1500m. At the time of writing, the 1500m races have yet to get underway, but results will be posted here.

This weekend was one of the last of the cross-country season as the warmer and drier months move in, and so it is fitting for this to be the last part of the round up.

Lloyd Park played host to the final Surrey League fixture, rescheduled after Storm Eunice brought its chaos to the intended course at Effingham Common a fortnight ago. Victories in the Division 1 fixtures went to Georgie Grgec of Herne Hill and Thames Hare & Hounds’ Jack Millar respectively, with Belgrave Harriers winning both team events.

Kudos must go to Croydon Harriers, who at short notice incorporated the Surrey League into the (usually much more informal) East Surrey League, which was won by Tom Jervis of Hercules Wimbledon on, as I learnt first-hand, was an incredibly muddy course.

Kirsty Lowery of Sunderland Strollers and Morpeth Harrier’s Phil Winkler who took wins in the respective senior races in the North Eastern Harrier League, held in the beautiful grounds of Alnwick Castle on Saturday.

Whilst this race report was sleeping Patrick Dever and Andy Butchart were busy setting the track alight in the USA. Dever, a GB 5000m champ and rising star for the future, ran 27:23.88, to clock a World Champs qualifier and 5th fastest time ever. Scotland’s Butchart broke the long standing 45 year old record of Ian Stewart with 27:36.77.