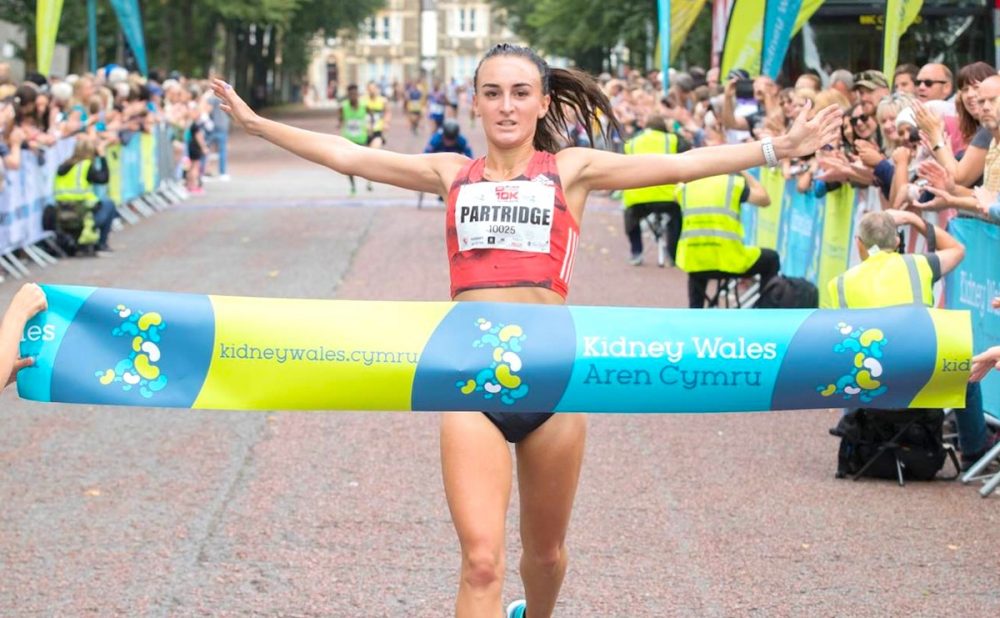 This year’s Cardiff 10k (September 2) saw five athletes convincingly break the 30-minute barrier in one of the country’s most competitive events.

The city is set to host the inaugural Commonwealth Half Marathon next month, so this race was a perfect tester ahead of the international competition on October 7.

Griffiths has been in scintillating form this year since returning from five months out with an injury. The Swansea star did well to hold off Matt Clowes with a superb 29:10 result, his fastest since last September and a season’s best of 31 seconds. Cardiff’s impressively consistent Clowes was a mere nine seconds behind in second when he finished in a top class 29:19. That result represents a massive 10 second PB for the prolific 10k racer, a well-deserved result.

Another local athlete, Cardiff Met’s Jake Smith ran a strong 29:31 for third, with Tonbridge’s Henry Pearce and Newham & Essex Beagle’s John Beattie making up the top five with times of 29:33 and 29:51 respectively.

Partridge will have taken a great boost from her win here following her mid-race withdrawal from the European Championships marathon due to debilitating stomach cramps. Her time in victory was 33:27, nearly 90 seconds clear of her nearest rival, Shaftesbury Barnet’s Rachel Felton, who ran 34:52 for her eighth 10k this year so far.

Mick Morris Racing Team’s Natasha Cockram – running for perhaps one of the most unusual club names on the circuit – made up the podium positions with a 35:12 result.

Stephen Weston took the title here in 76:52 in convincing fashion (September 2), heading off Border’s V40 James Buis, who posted a 78:12 result. Buis boasts an impressive PB of 68:07 over the distance. South Derbyshire’s David Clarke was third in 80:09.

Sian Finlay was victorious in the women’s race in 93:35, ahead of Border’s V40 Fiona Todd’s 94:31. Todd did well to hold onto second place as Keswick’s Lindsay Walker tried her best to catch her in the closing stages, eventually finishing 10 seconds back in 94:41.

The depth in quality of this Derbyshire race (September 2) was slightly down on previous years due to the England Athletics championship event at Trafford and the Cardiff 10k taking place on the same day. The leading pack at Wilne

However, Northampton’s Hayley Munn and Wakefield’s Julie Briscoe were a classy pair at the sharp end of the women’s race.

Munn took the title in 35:54, steering off stiff competition from V35 Briscoe, who clocked 35:59. Birchfield’s Ellie Stevens took the third prize in 36:48, slicing more than a minute off her PB in her first race since last October.

The women’s race was a competitive affair (September 1), with the home club’s Alice Burgin an effortless winner in 36:41, 30 seconds shy of her PB but well clear of second placed Molly Browne, who ran 37:34.

Bournemouth’s Georgia Wood continued her impressive return since having a baby to take third place in 38:20 on the testing course. Georgia Woods was third, six months after having a baby

Burgin’s club mate Oliver Saville kept the top prize on home turf when winning the men’s race in 34:06, with Redway’s V40 Genci Pepaj never far behind in second with 34:14, a 7 second PB. Higham Harriers excelled when their athlete Nathan Jones ran 35:40 for third – the club is one of the smallest in the country!

The top end of the men’s race here (September 2) was dominated by services athletes, with the Army’s Paul Molyneux taking the win in a classy 69:31. The RAF’s Sam Mitchell also ran well to take second in 70:04, while the Army’s Arnold Rogers also dipped under 71 minutes with a 70:55 clocking.

Luton’s Rosie Keane won by a comfortable margin in 80:56, and with no other results to her name on the Power of 10 it will be interesting to see her progress following this win. Riverside Runners’ Johanna O’Regan ran 82:23 to mark a successful fourth half marathon this year, while the Army produced another prize winning performance when Alice Whiley took third place in 85:17. Serpentine’s Nicolas Besson was a clear third in 70:50.

Harpenden Arrows’ Camilla Hermsen was 40 seconds clear when she won the women’s race in 82:44. Ealing Eagles’ Melissah Gibson took second in 83:29, while V40 Isobel Rea from West 4 Harriers ran a lonely race in third, crossing the line in 84:55, 30 seconds ahead of fourth.

The top three men were well spread out at this picturesque Somerset race (September 2), with Cheltenham & County’s Marcus England the ultimate victor in 71:31.

He was nearly two minutes clear of Highgate Harriers’ Shaun Dixon’s 73:17, while Exmouth Harriers’ Ryan Snell was a further 79 seconds back in third with 74:36. The start of the Bridgwater Half Marathon

This race is organised by Battle Bonfire Boyes, an organisation dedicated to the history of bonfires, and there were certainly sparks flying when the young winner of the women’s race broke the tape in third overall (September 2).

Hastings AC’s Lizzie Clarke was a sparkling first in 35:52, and she is yet to celebrate her 18th birthday! The youngster has also run an incredible 28:51 for 5 miles and 17:28 for 5k so far this year, so keep your eyes on this exciting talent.

Clarke’s club mates Rachael Grass and Jenna French made it a Hastings clean sweep of the podium when they clocked 39:45 and 41:24 respectively.

There were also some super fast times at the Trafford 10k on Sunday (September 2), with Marc Scott and Jessica Piasecki taking the wins. A full report can be found here.

Meanwhile, Adam Hickey and Khai Amelie Mhlanga ran the fastest times at UK parkrun this weekend. The top 10 can be found here.